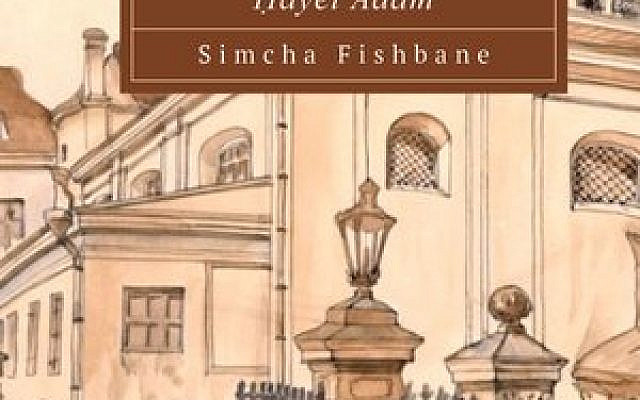 A friend facetiously asked what led Rabbi Avraham Danzig to name his classic halachic text Ḥayei Adam. He replied that the author did not want anyone to write an abridgment. And as such, no one would ever dare write a sefer by the name of Kitzur Ḥayei Adam.

Rabbi Dr. Simcha Fishbane (professor of Jewish studies – Touro College) writes in Beyond a Code of Jewish Law: Rabbi Avraham Danzig’s Ḥayei Adam (Academic Studies Press), that until a century ago, the Ḥayei Adam was the go-to guide for practical halacha. Once the Mishnah Berurah was published, the popularity of the Ḥayei Adam began to wane. To the degree that if you asked a yeshiva high school today what the Ḥayei Adam is, you might not get a definitive answer.

The Ḥayei Adam was first published in 1810, and its popularity quickly spread throughout Europe, such that a second edition with substantial revisions can out in 1818. This insightful book shows how Rabbi Danzig used the book to guide people who could not make their way through the Shulchan Aruch and express his own views and philosophical agenda. It also sheds light on the social order of late eighteenth-century and early nineteenth-century Jewry.

Today, countless guides are available on every aspect of Jewish law, from major aspects around kashrus, Shabbos, and the holidays. To more arcane books that include pictures of how big a piece of kugel needs to be in order to say a bracha achrona. But the Ḥayei Adam was the first fully encompassing code of Jewish law since the Shulchan Aruch was published in 1563.

However, in the early 1800s, there were no guides around halacha available for the ordinary Jew until the Ḥayei Adam was published. Furthermore, it is not like the publication got Rabbi Danzig a red carpet rolled out for him. Publication of the book was criticized by many rabbis, given that Rabbi Danzig was a former businessman and did not spend his entire life within the confines of Torah. However, Rabbi Danzig was certainly no slouch. He was part of the inner circle of the Gra and had a long and deep relationship with Rav Yechezkel Landau – the Noda Biyhudah. In addition to being a colleague of Rabbi Chaim Volozhin. And the Ḥayei Adam is also quoted often in the Mishnah Berurah.

It was not just that Rabbi Danzig was a businessman that led to the objection of the book. Many rabbis of the time felt that, correctly, such a book would serve as a manual for laypeople to make their own decision without the assistance of an experienced rabbi. Much like current times, Google has turned into a vehicle for halachic answers and also created the concept of a Google posek. Rav Hershel Schachter astutely noted that you can’t talk to these Google poskim on Shabbos since they are devoid of their trusted source of knowledge.

Part of what led to the book’s writing was the collapse of political and social structures throughout Europe. Jews were leaving the well-governed life of the shtetl for a more open life in the city. Combined with steam power, books were much cheaper and more accessible to everyone.

The irony is that after he left the business world and entered the rabbinate full time, he may have, in fact, spent more time in the Torah world than other prominent rabbis who died young. Such as Rabbi Moses Isserles (Rema) and Rabbi Avraham Gombiner (Magen Avraham). But this was the view in the 19th century that a former businessman, no matter how much he accomplished in the Torah world, could be accepted.

Fishbane explains how Rabbi Danzig traveled extensively throughout Europe, which offered him the opportunity to become acquainted with Jewish communities’ various cultures, especially with the halachic behavior of the Jewish laity. His travels also gave him firsthand knowledge of the growing enlightenment and reform movements, which were quickly growing throughout parts of Europe.

The Ḥayei Adam was written with both an implicit and explicit agenda. Fishbane contends that the implicit agenda was Mussar as Rabbi Danzig felt that the individual Jew must seek a higher level of Jewish conduct than that required by halacha.

It was not that long ago that a copy of, if not multiple copies of the Ḥayei Adam were found in every Jewish home. Today, the Ḥayei Adam has been superseded, for many reasons, by texts such as Aruch HaShulchan, Mishnah Berurah, and others.

The only negative of the book, like another from Academic Studies Press, is its list price of $109, which means that it will likely require library borrowing for many people. That price limits its reach, which is a distressing for a book this good.