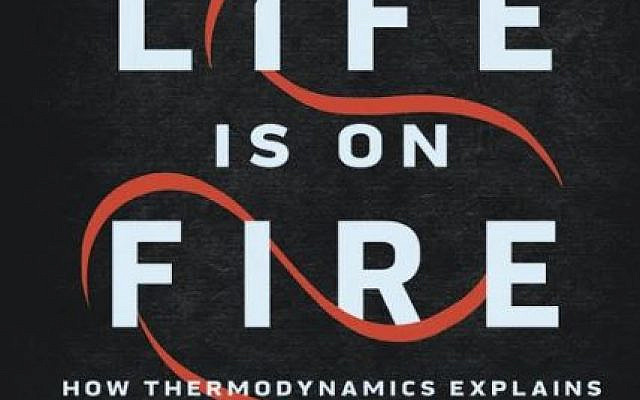 In his legendary paper Rupture and Reconstruction: The Transformation of Contemporary Orthodoxy, Professor Haym Soloveitchik observed that the topic of sefirat ha’omer is a subject that had rarely if ever, rated more than a hundred lines in the traditional literature.

In Every Life Is on Fire: How Thermodynamics Explains the Origins of Living Things (Basic Books), author Dr. Jeremy England, a theoretical physicist, has perhaps but a hundred lines (ok, maybe a bit more) on religion. However, with his nuanced and subtle and incredibly brilliant style, England has written one of the finest and most splendid books on the topic of religion and science.

In Melachim 1 19:12, it states that God is not in a powerful earthquake or fire but instead in a gentle whisper. In the book, England does not try to overpower the reader with massive numbers or complex statistics but uses that gentle whisper to make his point. Yet, with all the whispering in the book, England proposes some fascinating and provocative ideas. With his idea of dissipative adaptation, he believes that he has found the fundamental physics that explains life’s origin and how life has evolved.

So what is this thing that England calls dissipative adaptation? In his review of the book, Chad Orzel writes that dissipative adaptation is the idea that a complicated system that can be reconfigured by random motion will tend to end up in one of two kinds of states. Either it is tuned to absorb and redirect the flow of incoming energy in ways that do something useful (building or repairing pieces of the system), or it ends up tuned to be unable to absorb the energy, and thus remains in a stable configuration long after you might have expected random fluctuations to break it up.

It’s worth noting that the Chumash itself is particularly interested in the question of how and why matter might cross from being lifeless to alive, and this subject is at the center of one of its most central narrative moments. While the Chumash is not a science book, England uses the biblical lexicon to provide a rich organizing framework for the different ideas in the natural sciences that can be woven together into a complete account of the origins of living things.

In the book’s eight chapters, England takes a Biblical verse and expounds on it from a dissipative adaptation perspective. The book opens with the obvious verse of In the beginning. England then expands on a wide variety of verses and their scientific implications. From the snake of Moshe, blood in the Nile, the burning bush, and more.

As to the burning bush, England see in the text an emphasis on the destructive potential of the very energy flow by which life is sustained. England applies dissipative adaptation to this story to show that fire is far from a randomizing, disassembling influence. The environment to which an organism is adapted is integral to it. And in this sense, every life is on fire, like the burning bush – wreathed in that familiar flame which helped coax it into being.

Many people expect science to provide absolute certainty, which it often does. The brilliant scientist he is, England often goes to the perimeter of the mystic side of things, pondering if a rock can remember and if flames and tornadoes know something about what it means to be alive.

Rather than positing definitive answers, England notes that many scientific questions often do not yield definitive answers. Rather they remind us that life admits many imperfect translations into the language of physics, and in order to hone our skills as translators, we may want to spend some time pondering life’s highly ambiguous boundary.

Many of England’s writings to date have tried to demonstrate that the scientist and homo religious are often in concert, albeit with different languages and terminologies. They often have two different languages to address the same phenomena. The book, in part, is his attempt to bridge this divide, and create a common language.

This is a book about science and religion that is unlike anything I have ever read. In every chapter, England exudes extraordinary brilliance, and at times he seems to think the reader is as brilliant as he, as he throws in complex terms and ideas. This is not the easiest book to comprehend, and I found myself going to Wikipedia quite often.

The late great Rabbi Lord Jonathan Sacks, not coincidently a significant influence on England, started to bridge the gap between science and religion in his remarkable book In The Great Partnership: Science, Religion, and the Search for Meaning. In this brilliant tome, England has raised the bar so high in the field of the integration of science and religion, such as he is the only one there.