Any of the three main books that Rambam (Maimonides) wrote (Mishneh Torah, The Guide for the Perplexed, commentary on the Mishna) would have left a lasting legacy and made him one of the greatest minds in Jewish history. The fact that he wrote all three proves that point in the famous saying, “From Moshe to Moshe – there arose none like Moshe.”

I thought of that when reading Rabbi Netanel Wiederblank’s recently released Illuminating Jewish Thought: Faith, Philosophy, and Knowledge of God – Volume 1 (Magid Books). Volume 2 of his three-part series was published in 2018, and just writing that alone would have made Wiederblank one of the generation’s best authors – that book is that good. I would assume that Wiederblank is either a Star Wars fan or takes the notion of ain mukdam u’meuchar baTorah quite seriously to publish volume 1 after volume 2. 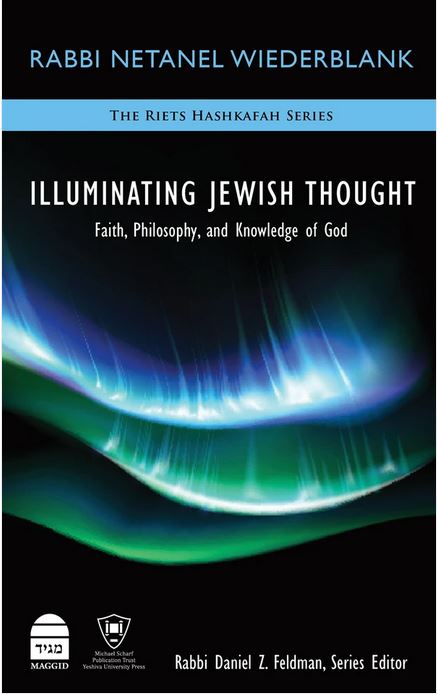 Like in volume 2, Wiederblank has written another brilliant sourcebook, this time around three core areas of Jewish life: faith, philosophy, and knowledge of God. The primary purpose of the series is to collect and analyze the various traditional sources on these topics. The author has collected a voluminous amount of material and presents these as primary sources for the reader.

The truth be told, creating a sourcebook is not so exceedingly difficult. Some people do it via a Google search; they gather numerous sources about a topic and publish it. The brilliance of Wiederblank is that he can take an overwhelming amount of sources, organize them in a systematic and digestible manner, and skillfully explain all of them.

The book comprises four units (machshava, aggada, belief in God, knowing God) of 12 chapters. As Rabbi Yona Reiss notes in his Foreword – Wiederblank has a rare gift for elucidating the esoteric and illuminating the incomprehensible. The outcome is a book of breathtaking depth and breadth.

Perusing the table of contents, the book deals with central areas of faith and many of the core areas of Judaism. The book deals with topics that are often on the back-end of our lives from philosophy (and its potential danger), singular vs. multiple truths, science, and the Torah, proving and knowing God, kabbalah, and much more, yet are fundamental and essential. Having these correct theological positions is critical for a believing Jew, and it is, in fact, something the Rambam insisted on.

Why these central topics are not studied in greater depth, especially amongst our youth, is puzzling. Today’s bar mitzvah boys often give dazzling speeches using copious amounts of Talmudic logic. However, when asked about the fundamentals of belief and faith, they are often left speechless—making this work an indispensable bar/bas mitzvah gift.

I found chapter 11 on Rambam’s perspective on disbelief resulting from faulty reasoning to be an incredibly enlightening chapter. This is also an essential chapter for anyone involved in Jewish outreach. The stakes here are incredibly huge, both in this world and for eternity. As one reading of Rambam’s thirteen principles of faith implies that anyone who does not believe in them is excluded from the Jewish people and loses their share in Olam ha’bah (the world to come) no matter what the cause is for their disbelief.

The most famous expositor of this position iss the often-quoted opinion of Rav Chaim Soloveitchik when he said that “nebuch an apikorus iz oich an apikorus” (an unfortunate heretic is still a heretic. Before anyone jumps to conclusions, Wiederblank astutely notes that this position of Rav Chaim never appears in any of his published writings. Nevertheless, the underlying point is that articles of faith can be like dynamite – devastating if misapplied.

The chapter details various texts that indicate that Olam ha’bah is predicated upon a correct understanding of God. Ultimately, we do not consider anyone whose heresy is excusable as a heretic. This is based on other principles stated by the Rambam, and most recently, the views of the Chazon Ish on the conception of tinok sh’nishba (Talmudic term referring to a Jew who lives a life of non-observance based on their lack of Jewish education or experience).

The internet is filled with stories (many overly dramatic) of people from more sheltered communities who left observance after spending a few hours on Google. Had these people spent an equal amount of time reading Illuminating Jewish Thought, their direction would likely be different.

In his introduction to his code of law, Rambam writes that his decision to codify Jewish law was primarily a response to contemporary needs. If there is a book for current times, Illuminating Jewish Thought is it. And this is the desert island book that should be on every school’s curriculum and be on the shelf of every home.