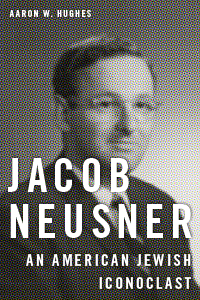 Schrödinger’s cat is a well-known thought experiment by physicist Erwin Schrödinger. Using quantum mechanics, Schrödinger showed how this cat could paradoxically be simultaneously alive and dead. If there could be a term such as Schrödinger scholar; it would apply to Jacob Neusner. Rarely has there been an academic who has been simultaneously called both one of the greatest minds in recent times, and someone ignorant of the subject matter he is dealing with.

In Jacob Neusner: An American Jewish Iconoclast (NYU Press, ISBN 1479885851), author Aaron Hughes, chair of Jewish Studies at the University of Rochester, has written a fascinating and engaging biography of one of the most influential and divisive scholars of Jewish studies in recent memory.

For many, Neusner is simply known as one of the most published authors in history, having written or edited nearly 1,000 books. While the number is indeed staggering, Hughes writes that Neusner’s ability to write so copiously has its roots in Neusner’s working with his father’s newspapers from a young age where he learned the tricks of the trade. That combined with a highly organized mind and the ability to type extraordinarily quickly and accurately enabled him to write so much. It’s said of Neusner that he never had an unpublished thought.

Some speculate that many of Neusner’s books were written by research assistants and students, but Hughes gives no indication to that. Given his extremely high standards and demands, one gets the feeling that Neusner would never have the patience to let a student do the writing. Given that speed at which he was capable of writing, it’s likely that it was simply more economical for Neusner to pen it himself.

It’s not just books that Neusner wrote. He was copious in writing editorials, letters to colleagues, essays, political observations and myriad memos to staff and university professional. As to the volume of his writing, Morton Smith, professor of ancient history at Columbia University was one of the early critics of Neusner and felt that he in fact wrote too much and didn’t read enough.

Throughout the book, Neusner comes across as a man fraught with contradictions. He demanded a lot from his students in the name of intellectually honesty. But when a paper of his would be rejected from a journal, he’d reply to the editors with ad hominem and threats to take his writings elsewhere.

His intellectual capabilities alone played a large part in his success. But as Hughes writes, having a wealthy and generous father in law enabled Neusner to print his works much more easily than other scholars.

Hughes writes that Neusner grew up with a minimal Jewish education such that for his 16th birthday, he asked for Hebrew lessons. It may be that lack of initial education that lead him to see himself as the proverbial outsider. As someone who mastered Hebrew relatively late, one of the recurring criticisms lodged at him was that he took great liberties with his translations.

The title An American Jewish Iconoclast is indeed descriptive of Neusner, as Hughes shows that Neusner disagreed with what seemed like every major scholar of his time. The list includes Harry Wolfson, Salo Baron, Morton Smith, to Saul Lieberman and many more.

Neusner’s raw talent and underlying intellectual capabilities are without dispute. One of the many proofs is where Hughes tells the story of an assignment Neusner had at while at Oxford. Misunderstanding the instructor, who meant the assignment to occupy him during the eight-week term, Neusner mistakenly thought it was his homework for the following week and handed it in.

Mercurial is a term often used in conjunction with Neusner. Hughes writes of his propensity to hit back, often with the harshest of language to anyone who disagreed with him. This included writing letters to pretty much everyone at every institute he worked at until the end of his career. His responses included highly polemic titles such as How Adin Steinsaltz Misrepresents the Talmud and Are the Talmuds Interchangeable?: Christine Hayes’s Blunder.

More evidence of his mercurial nature is that he may have been the only scholar to have a lawyer on retainer. Neusner would often use his attorney to put various critics of his on notice that their comments (at least according to Neusner) were closer to libel than critical analysis.

Neusner was far from a monolithic scholar and wasn’t afraid to write on a diverse set of topics As a superb social commentator, one of his most controversial, yet pragmatic pieces was The Speech the Graduates Didn’t Hear written during his last year at Brown University. Written for the Brown Daily Herald in 1983, he vented his frustration towards the students and administration, characterizing them as nonchalant and lazy. He took students to task for not working hard enough and to the professors who he felt only gave the students passing grades to get rid of them.

Neusner often complained that those who critiqued or discredited him focused too much on misprints and trivial errors. Yet in taking others to task, Neusner himself was at times guilty of that.

In one particular incident, he accused the librarians at the Jewish National and Hebrew University libraries in Jerusalem of keeping his works under lock and key, along with pornography, and not giving them a place on the open shelves of the reading rooms.

The reality is that in these, like most national libraries, over 90% of the books are in closed stacks. Neusner’s books likely weren’t in the open stacks as the scholars there felt his works weren’t good enough to be included in the reading room. As to being together with pornography; that’s simply an absurdity. It’s hoped Neusner meant that as a metaphor. And even so, a juvenile metaphor at that.

Hughes writes that Neusner’s relationship with American Judaism was extremely complicated. He never felt at home in the Conservative movement leading to his break with it. His embrace of Reform Judaism was more likely a mercurial reaction to his lack of recognition from the Conservative seminary. More bizarrely, Neusner felt that that Reform Judaism founded modern learning in Judaism.

A downside to this book is that it is far too short of a work to cover a personality as complex and interesting as Neusner. One can’t encapsulate a man like Neusner in under 300 pages.

Also, Hughes doesn’t deal with how truly impactful a scholar Neusner has been. While he was prolific; it’s unclear how much he has truly added to the field.

In his review of this book, Professor Shaul Magid asks if it’s is it time to take Neusner seriously. As Neusner’s writing has stopped over the last decade due to Parkinson’s disease, Magid’s question will slowly be answered as we enter the post-Neusnerian era, where deeper explorations of his methodology and works will start in earnest.

Complex personalities are often the most interesting, and Neusner is no different. Aaron Hughes has written a marvelous biography in Jacob Neusner: An American Jewish Iconoclast. This is a fascinating read, and the right place for this book is at the top of your reading list.