In 1965, Rabbi Joseph Soloveitchik wrote The Lonely Man of Faith, and used Hegel, Kierkegaard, Kant and other philosophers as a springboard for his discussion of the vibrancy and relevancy of religion and faith in the modern era.

Half a century later, Rabbi Shlomo Einhorn takes a similar approach, albeit with a very different set of characters. In Judaism Alive: Using the Torah to Unlock Your Life’s Potential, (Gefen Publishing ISBN 978-9652296528), he takes a New-Age approach to the topic in this most enjoyable work. 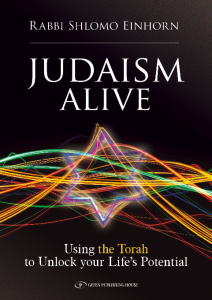 For those unfamiliar with Rabbi Einhorn, Rabbi Steven Weil, senior managing director of the Orthodox Union, called him “the top young Orthodox rabbi in all of North America.” Einhorn is a with-it author, and is not your mother’s Rabbi; this is not your mother’s book. For the seeker that wants ancient answers couched in a more modern context, this is a book that will likely quench part of that spiritual thirst.

In the preface, Einhorn asks what it means to start “living” and to live a full life. He answers that it means that every day is filled with a sense of purpose. In the book, he gathers insights from various Biblical, Rabbinic, and Hasidic sources, and combines them with the likes of Tony Robbins, Deepak Chopra and many other contemporary sources. His goal is to show the relevancy of ancient Jewish sources, in order to give the reader a guide to a more fulfilled life.

Einhorn is definitely an out-of-the-box type of person, as is reflected in the book. He weaves the thoughts of Marianne Williamson into the same paragraph as a contemporary Hasidic master. He does this throughout the book, and provides myriad insights into who a person is, and what they can be.

It’s important to note that while Einhorn frequently cites pop references, be it lyrics from Queen or a passage from Amadeus; his out-of-the-box approach firmly remains within the framework of traditional Judaism, never straying from the basic tenets of Jewish thought and law.

The books three chapters focus on life lessons from Abraham, Joseph and Moses. In each chapter, he shares life lessons from these Biblical characters, and writes how their struggles and life challenges are similar to those that we face today. Einhorn writes of the manner in which they dealt with their challenges, and how by utilizing a similar approach, we can deal with our unique sets of challenges. The outcome of this is that we can indeed live a more meaningful life.

Einhorn is a big fan of Tony Robbins and quotes him often in the book. Robbins’ approach is to help people be more productive and successful. Einhorn takes that approach, but adds a spirituality and Jewish soul to it.

However, Einhorn’s penchant for New Age insights doesn’t always work. He describes a seminar which purports to show the power of the mind by the fact that controlling the mind allows one to walk on fire; the mundane reality about fire walking is that it is not really that difficult to do, and has clear physical explanations.

Wikipedia notes that some of the reasons are due to the fact that water has a very high specific heat capacity, whereas embers have a very low one. Therefore, the foot’s temperature tends to change less than the coal’s. Water also has a high thermal conductivity and the rich blood flow in the foot will carry away the heat and spread it. On the other hand, embers have a poor thermal conductivity, so the hotter body consists only of the parts of the embers which are close to the foot. Finally, firewalkers do not spend very much time on the embers, and they keep moving.

The good news is that the other insights Einhorn shares are to the point and accurate. He’s a person who has his hands on the pulse of society and his listeners, and is able to provide them with a fulfilling message. For those looking for an engaging and topical voice, and one that awakens you, rather than puts you into a sermon-based slumber, Einhorn provides a just that.

Soloveitchik wrote The Lonely Man of Faith to be a universal guide to people of all faiths. In Judaism Alive: Using the Torah to Unlock Your Life’s Potential, Shlomo Einhorn takes a similar approach and has written a guide that will provide insight and awareness to all. Spiritual growth is about getting to the next step. And this book details the steps in which to start getting there.