Journals and diaries have long provided historians and readers with unique insights into historical events. From Anne Frank to Virginia Woolf and more, the details in these accounts are of significant historical value.

While not at the individual level, Protocols of Justice: The Pinkas of the Metz Rabbinic Court 1771-1789 (Brill Academic Publishers ISBN 978-9004265158) details the official register of cases that came before the Metz, France rabbinic court (beis din) in the two decades prior to the French Revolution. The register (pinkas) deals with a wide range of cases that the Jews of Metz dealt with. 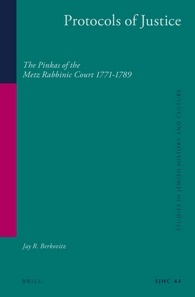 Author Jay Berkovitz, Professor and Chair of Judaic and Near Eastern Studies at the University of Massachusetts Amherst, has painstakingly transcribed the pinkas, which provides fascinating and new insights in the lives of the Jews of Metz. Through his work, Berkovitz has opened a manuscript long gathering dust in the YIVO archives, brought it to light, and created an invaluable resource for scholars.

But his contribution is not simply as a transcriber; rather his decipherment of the cases significantly changes our understanding of how the Metz rabbinic court interacted with French society at large, in addition to the influence of French society on the court itself.

A pinkas can refer to both court registers, in addition to communal registers. The pinkas of the Metz Rabbinic Court (PMRC) is one of a very limited number of extant court journals.

The PMRC is perhaps the most complete beis din journal available. This provides researchers with a unique mapping to information concerning the culture of the Jewish community. It in turn can be used to investigate the interplay between law, society and culture. While the transcripts of the cases in the pinkas are somewhat dry, the discover of this interplay that Berkovitz has uncovered is groundbreaking.

The pinkas allows the reader to better understand the communal structures, economic patterns, dynamics of family life and role of law in the years leading up to the French revolution. The events that transpired and the cases that came before the court are not that radically different than what many courts deal with today.

The MBD (Metz beis din) dealt with a wide variety of cases encompassing the entire spectrum of life, including commercial transactions and disputes, inheritance and division of assets, paternity cases, women’s roles in economic life, the interplay between French law and Jewish law, and much more. As to inheritances, the book interestingly notes that French civil courts at the time did not recognize a will as a means of distributing property in the estate of the deceased. It’s such an environment in which the MBD had to deal with.

The PMRC is not a word by word transcription of what occurred in the beis din. Rather a detailed summary of the judicial proceedings that were produced by court scribes.

Berkovitz writes that the pinkas shows that the MBD didn’t operate in a vacuum and to a degree, was fully engaged with French culture of the times.

This is a 2-volume set with volume 1 providing a narrative and overview, and volume 2 with the actual text of the pinkas. The five chapters of the English volume 1 are:

With volume 2, in Hebrew consisting of

A significant theme that Berkovitz advances is that the Metz court records contain conclusive evidence that the engagement of the Jews with the social, cultural and economic dimensions of the society around them was far greater than is generally assumed.

Berkovitz notes that one can’t simply dive into the pinkas without first considering three intersecting areas of history and law. Namely the history of the Jews in Metz and northeastern France, modes of Jewish jurisprudents in the Beis Din, and the relationship between Jewish law and general law. The book provides significant and interesting detail into all of those areas.

The portrait of the MBD focuses on both its roles in the local community affairs and on its interaction with the larger world of French law and jurisprudence. In fact, the MBD records challenge the very idea of an insular Jewish legal system and an insular Jewish culture. It was this theme which I found most interesting.

Chapter 5 on Woman, Family and Property is particularly interesting, as the proceedings of the MBD challenge the monolithic picture of the traditional family by presenting a wider variety of images of family relationships than is generally available in most conventional accounts and prescriptive legal sources. Women of the time were indeed heavily involved in the commercial sector. Berkovitz writes that women involved in pawn broking and moneylending constituted roughly twenty percent of the total number of Jewish lenders who appeared before the MBD.

The pinkas shows the enormously complex legal, social and political challenges that the Jews of Metz and environs faced. By opening up this important pinkas, Berkovitz has given researchers significant amounts of area in which to delve deeper.

The pinkas shows that the daily lives and problems faced by the Jews of Metz were not so different than what many today. Plus ça change, plus c’est la même chose