Biographies of those who lived during transitional periods are particularly fascinating. One of those people who did was Rabbi Shear Yashuv Cohen. While most people associate him as the former chief rabbi of Haifa; he was also a Deputy Mayor of Jerusalem, President of Ariel Institutes, Chief Rabbi of the Israeli Air force, and much more.

In Rabbi Shear Yashuv Cohen: Between War and Peace (Urim Publications 978-9655242539), authors Yechiel Frish and Yedidya HaCohen present a fascinating and very enjoyable biography of a pivotal figure in the history of Israel.
< 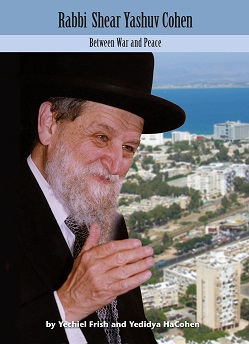 Rabbi Cohen’s father Rabbi Dovid Cohen was known as The Nazir. His father was a scholar, mystic and ascetic, and it’s that environment that shaped his worldview. An interesting sidenote the books details is that the Nazir’s commitment to being a Nazir was not a binding vow; but rather a custom that he voluntarily took upon himself and his son voluntarily; in order to raise their spiritual levels. Rabbi Shear Yashuv would later disavow being a nazir in his late teens.

The two main themes of Cohen’s life which the book details are Torah and the land of Israel. The book writes of his interactions with Torah personalities, including the Brisker Rav, Chazon Ish, Lubavitcher Rebbe and more.

One of the questions he asked the Lubavitcher Rebbe, Menachem Mendel Schneerson, is why he never visited Israel. The book details an intimate conversation Rabbi Cohen had with Rabbi Schneerson where he explained his rationale. When Rabbi Cohen tried to suggest a way around that to facilitate a visit, the Rebbe remained silent for a time and his eyes filled with tears. They then changed topics.

A large part of the book details Cohen’s experience during Israel’s 1948 War of Independence. He was involved in the fight for the Old City of Jerusalem and when the Old City surrendered, was taken captive by the Jordanian army. He is one of but of a few rabbis who were also a prisoner of war.

Cohen was a man of incredible brilliance, depth and compassion. While not as well known amongst Americans as many of his contemporaries, his life story is a mesmerizing one. And this book makes for an equally mesmerizing read.