Much of human history can be encapsulated in the astute observation by Jean-Baptiste Alphonse Karr that plus can change, plus c’est la même chose – the more things change, the more they stay the same. That holds true for many things, politics included. And that being both modern politics, and that from thousands of years ago.

In The Beginning of Politics: Power in the Biblical Book of Samuel (Princeton University Press 978-0691174624), authors Moshe Halbertal (Professor of Jewish Philosophy at The Hebrew University of Jerusalem) and Stephen Holmes (Professor of Law at New York University) have written a masterful work detailing the narratives of Kings Saul and David, how politics and power shaped their destinies, and set the stage for politics of the future. While the events in the Book of Samuel occurred over 3,000 year ago; Halbertal and Holmes astutely write how these events are similar to all politics and monarchies that have since followed. 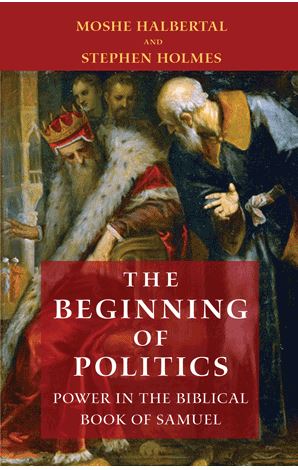 One might initially think that the biblical book of Samuel has nothing to offer the modern political theorist. But the authors note that what makes Samuel not only a literary masterpiece, but also a profound work of political thought, is the way in which the narrative comprehends the true nature of human politics. The very nature of power and politics as they note is independent of time and location.

The notion of monarchy came late to the history of Israel. Gideon, the prophet from Book of Judges, told the people that any attempt to establish a human monarch was idolatrous. And it was in that environment in which Saul and David followed, as did their political struggles.

The book focuses on the dynamics of Saul and David, the first two kings of Israel. The underlying themes are the dynamics of power and monarchical families. The authors note that Samuel is arguably the first and greatest work of Western political thought.

Where this book succeeds, and what separates it from most others that try to integrate modern thought with a biblical narrative, is both Halbertal’s overall scholarship, combined with his comprehensive understanding of the classic biblical texts in their native Hebrew. Halbertal can accentuate and bring out the nuances of the Hebrew language, which is key to understanding the underlying story. That combined with Holmes understanding of political theory make this a most fascinating work.

Another nuanced theme relevant to the Book of Samuel detailed is the notion of revenge cultures. In these cultures, vengeance is considered one of the highest moral obligations that family members owe to one another. The book ties this with the David’s obligation, who as king, had to ensure that he was able to restrain blood revenge, as the essence of kingship needs to rise about that of kinship.

The book details covert uses of sovereign power, the connection between violence and paranoia and violence and deniability, dynastic succession and more. A particularly fascinating chapter details the relationship between King David and his rebellious son Absalom. The underlying theme being the conflict between the power logic of power and the logic of love.

There is no shortage of books with titles similar to What Does the Bible Say About Politics? Most of them have corny evangelical answers, written by unsophisticated authors. Halbertal and Holmes are in a completely different league and are able to effectively and eloquently articulate how the events in Samuel are highly relevant to the study of political power today.