There are many TV commercials where consultants provide high-level advice, but are flabbergasted when asked to implement their ideas. There are similarly countless individuals who can consult on Middle East affairs, appear on prime time news and spout Middle East political theory; but precious few who understand every nuance, and better yet, how to implement the solutions. One of those rare few is Malcolm Nance.

Nance is a career US intelligence officer, combat veteran, author, scholar and media commentator on international terrorism, intelligence, insurgency and torture. In 2014 he became the executive director of the counter-ideology think tank the Terror Asymmetrics Project on Strategy, Tactics and Radical Ideologies (TAPSTRI).

Nance’s latest book is The Terrorists of Iraq: Inside the Strategy and Tactics of the Iraq Insurgency 2003-2014, and he provides a deep understanding of the subject. 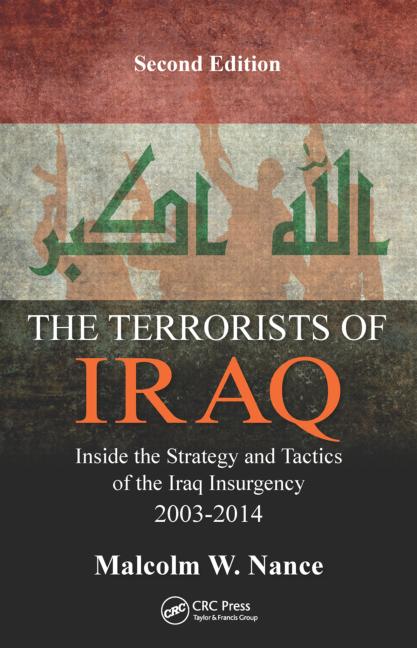 The book details how the many terror groups formed to create the Iraqi insurgency that led to the rise of the Islamic State of Iraq and Syria (ISIS). Nance places the blame on the Bush administration’s 2003 invasion of Iraq that lead to the destabilization of the country. While the war was based on faulty evidence, the insurgency was created by myriad mistakes, misperceptions and miscalculations by Paul Bremer, who lead the occupational authority of Iraq during the war.

A common theme Nance makes throughout the book is that the US ignored history and didn’t learn the lessons of the Iraqi revolt against the British in 1920 or the events of the Vietnam War. Those lessons being that insurgents and foreign terrorist operations were much more effective despite the enormous manpower and firepower that the US troops brought to bear in Iraq.

While the book only deals with Israel parenthetically, there is still significant issues affecting Israel. Nance notes that the 1982 Lebanon war and Israeli occupation of the country was similar to the American invasion of Iraq. Both were debacles that cost each country lots of causalities, with very little to show for it.

As to the Syrian border, it has been relatively quiet since 1973. While the al-Assad’s have long been enemies of Israel, the border has been fairly peaceful for the last 42 years. If ISIS continues on their expansion campaign, it’s not farfetched that the peacefulness of the Syrian border could be a thing of the past.

In an interview in Gawker with William Arkin, Nance advises that Israel should focus on preventing ISIS and not worrying so much about Hamas. He ironically states that Israel will need Hamas soon enough if ISIS and Al-Qaeda continue their westward expansion. He horrifyingly notes that Israel won’t have to worry about hundreds of rockets as much as they will have to worry about thousands of suicide bombers on its border. Thinks that farfetched? That’s basically what’s going on in Iraq 2015. Just yesterday, Ramadi fell to ISIS.

While somewhat contrarian; Nance thinks the nuclear weapons deal with Iran is a positive step. He notes that Iran wants expensive cars like BMWs, American goods like Red Bull and high-end items from Gucci. The only way they will get that is with a peace treaty.

It’s his opinion, and he does make sense here, that there are no military options for Iran. Attack them and they will destroy the Gulf States oil industries, rain hundreds of missiles into Israel, close the Arabian Gulf and shoot oil prices to $300 per barrel, which could cause an economic downfall in the United States.

Nance is not naive to the Iranian threat and notes that they are leaders in global terror. But if they want peace, and Nance thinks they do, then give them peace.

Nance offers a truly unique view on the middle east conflict. Israel is facing a potential threat that will make the Hamas terror tunnels seem insignificant. Nance’s views should be considered, and it’s hoped the powers that be in HaKirya may even bring him in for a consultation.

For those that want to truly understand the Iraq conflict and its surrounding issues, Nance is eminently qualified and this book is uniquely superb. There is no better book than The Terrorists of Iraq: Inside the Strategy and Tactics of the Iraq Insurgency 2003-2014 on the subject.