Brazilian Justice Luiz Fux (center, with medal) received the titles “Ambassador for Culture, Peace and Justice” and “Guardian of UN's 2030" from Congressman Roberto de Lucena and the Special Commission Brazil/UN of Legal Integration and Citizenship Diplomacy,Agenda”. Photo by ASCOM/STF

(BRASILIA, Brazil) Justice Luiz Fux is the current president of Brazil’s Supreme Federal Court (STF). His grandparents fled Romania during World War II and settled in Brazil. Born in Rio de Janeiro, he was the first Jewish to become Justice, in 2001.

Last September, at 67, he started presiding the highest Court of the country. Since then, he received multiple honors, like the Jerusalem of Gold medal, granted by the Israeli Embassy for his contribution to the strengthening of the Brazilian Jewish community and the narrowing of the relationship with Israel.

On November 18th, he was awarded for his efforts to see Brazil implement the United Nations 17 Sustainable Development Goals (SDGs) and embrace the 2030 Agenda. The Supreme Court recently launched a website dedicated to monitors the advances made in the country.

As Fux emphasizes: “This important international commitment requires the action of all the Powers of the Republic. The Supreme Federal Court is a central institution to disseminate the vision, culture and, above all, the very high values of Agenda 2030: life, dignity, justice and sustainability. Furthermore, the Supreme Court’s jurisdictional performance effectively contributes to the fulfillment of the goals associated with each of the objectives of this Agenda. That’s why I believe the approximation of our Court and the United Nations is opportune”.

In recognition to his efforts, Justice Fux was granted the medal “Sergio Vieira de Mello, Brazilian hero, citizen of the world”, as well as the titles “Ambassador for Culture, Peace and Justice” and “Guardian of UN’s 2030 Agenda”.

The initiative, led by Congressman Roberto de Lucena, who chairs the Parliamentary Group Brazil-United Nations, was accompanied by Sóstenes Marchezine, Secretary-General of the Special Commission Brazil/UN of Legal Integration and Citizenship Diplomacy, Assistant-Secretary Judge Bruno Martins. The Commission is a branch of Brazilian Bar Association. Were also present, the president of the Brazilian Academy of Honors to Merit, Commander Regino Barros, and Professor Deyvid Pereira.

Created by the National Congress, the Brazil-UN Parliamentary Group is committed to encouraging the implementation of the 17 UN Sustainable Development Goals. The ceremony at the Supreme Court was an acknowledgment of the support of the Judiciary to this important agenda.

Commitment to the 17 SDGs

Congressman Roberto de Lucena expressed his satisfaction with the harmony of powers. “Our Parliamentary Group encourages the development of relations with the United Nations within the scope of the National Congress. We see that it has also echoed in the Judiciary, which, within its prerogatives, also works to see it happen”, he assured. 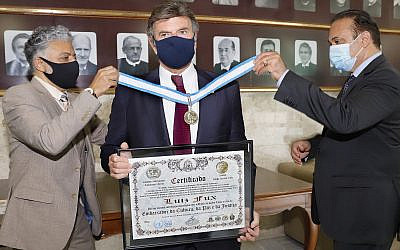 Secretary-General of the Special Commission Brazil/UN of Legal Integration and Citizenship Diplomacy, Sóstenes Marchezine, recalled that the SDGs are an ongoing challenge. “We understand that there is an opportunity to each citizen to fight for a better world and the UN proposal in the Decade of Action, from now until 2030, is precisely the union of forces so we can offer a better future for all humanity”.

He explained that Fux received a fair homage, “for his legacy, his trajectory and his commitment to Brazil to fulfill the 17 Sustainable Development Goals established by the United Nations”.