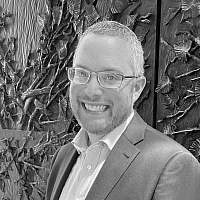 The Blogs
Jason Fruithandler
Apply for a Blog
Advertisement
Please note that the posts on The Blogs are contributed by third parties. The opinions, facts and any media content in them are presented solely by the authors, and neither The Times of Israel nor its partners assume any responsibility for them. Please contact us in case of abuse. In case of abuse,
Report this post.

Perhaps somewhat paradoxically, the approach of Yom Ha’atzmaut has me thinking about Queen Esther from the time of Purim. The Book of Esther, or the megillah, tells the story of a young girl in ancient Persia who became queen by hiding her Jewish identity. That is, until one day, when Queen Esther learned of a plot to kill all the Jews in Persia.  She suddenly faced a dilemma: lobby the king to save her people and risk her own life, or keep quiet and avoid attracting attention or controversy.

Luckily for us, Queen Esther did the right thing.  But today, as she did then, we face a dilemma.

Fortunately, the Jewish people today are much stronger than in Esther’s day, and unlike then, there is now a strong and vibrant Jewish state. Yet, our enemies remain—both around the world and here at home.

Though Americans overwhelmingly support Israel, a vocal anti-Israel minority is trying to grow in influence. They are spreading hateful lies and half-truths about the State of Israel. They are working to erode the alliance between America and Israel. And they are running for Congress. For those of us who stand with Israel, we now have a choice.

Should we engage in politics, and all the controversy and mudslinging that comes along with it, or stay silent and leave our future in the hands of others?

Luckily, AIPAC, which has stood for the America Israel relationship for more more than 60 years, is making it possible for us to do exactly that.  Until now, in principle, AIPAC has worked behind the scenes and focused exclusively on education and forming strong relationships.  Now, in order to combat this new threat they are making it possible for individual Americans to support the candidates they already love, but to do it in a way that reminds them Israel matters too.

They are standing up for those candidates assertive enough to declare their support for Israel. They are changing their tactics to meet the dire need of this moment.  If I’m being honest, this new shift makes me uncomfortable.  In fact, AIPAC’s singular approach means that there will be times they support and facilitate candidates who make me deeply uncomfortable. However, if I’m also being honest, there has never been such a concerted attack on the foundational relationship Israel has with America. I believe we need AIPAC’s new tactics.

This will not be easy, and Israel’s enemies will not give up without a fight. They will do everything and anything to silence us, extending their lies and smears against Israel to pro-Israel Americans like you and me.  As AIPAC moves into this new phase of its crucial work., I hope you will join me in being a supporter.

Of course, the rollout of new strategies will come with bumps in the proverbial road.  We, as friends and supporters, must hold the organization accountable but always with the knowledge that no group is more on the front lines of defending the special relationship Israel and America have maintained since 1948.

The choice is ours: We can stay comfortable and quiet, and leave Israel’s fate in the hands of others, or we can use the tools AIPAC is giving us and speak out for what we believe in—despite the criticism—because we know it’s right.

In the megillah Queen Esther first says “no.” She won’t reveal herself and risk her comfort and power. Only after Mordechai reminds her that the point of power is to do good work does she use the tools at her disposal to convince the king—at great risk to herself.

Today, I hope you’ll join me in supporting AIPAC as together we attempt to walk in Queen Esther’s footsteps and protect the America Israel relationship for another 60 years.

About the Author
Rabbi Fruithandler is currently serving as the rabbi of the Woodbury Jewish Center in Woodbury, New York.
Related Topics
Related Posts
Comments