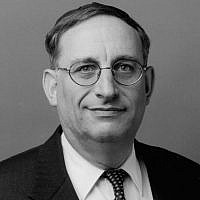 The Blogs
Yehiel Poupko
Apply for a Blog
Please note that the posts on The Blogs are contributed by third parties. The opinions, facts and any media content in them are presented solely by the authors, and neither The Times of Israel nor its partners assume any responsibility for them. Please contact us in case of abuse. In case of abuse,
Report this post.

Representative John Lewis was carried across the Edmund Pettus Bridge on Sunday, July 26, 2020, 55 years after he was nearly beaten to death by Alabama State Troopers while leading the March on Selma on March 7, 1965. On that day, now known as Bloody Sunday, not so long ago all that John Lewis and his fellow believers did was walk. That is all. They just walked. All that God asks is that we walk with God. As God first said to Abraham, “Walk your very self with Me in utter wholesomeness” (Genesis-Bereshit 17). And so, on that Bloody Sunday, John Lewis heeded the call to Abraham and walked with God. Parenthetically, if it were up to me, and it is not up to me, I think it is up to a consensus of African American religious and political leaders, I would not rename the bridge. I would however like to see a huge plaque across the span of the bridge: The Edmund Pettus Bridge – Redeemed and Consecrated by John Lewis. That is a conversation for another time. However, please note that bridge-walker Lewis said that for the sake of historical record and memory the bridge should retain its original name.

On Sunday, July 26, as I watched John Lewis’ final “walk” across the bridge, after so many years of commemorative walks, and 55 years after Bloody Sunday, I was reminded of another bridge-walker. One of the greatest Jewish heroes of the 20th century is Anatoli Sharansky. Like John Lewis, he was born into tyranny, and confronted tyranny. He was one of the leading Zionist activists of the Jewish people who rose up against the Soviet Union. On March 15, 1977 he was accused of being a spy. He was imprisoned in solitary confinement and with hard labor. He was a charismatic Zionist leader whose work led to the liberation of nearly a million and a half Soviet Jews, who realized their dream and made Aliyah to Israel. Under pressure from President Ronald Reagan, Sharansky was released by Soviet Premiere Mikhail Gorbachev on February 11, 1986. Sharansky was released to freedom in a prisoner exchange. The prisoner exchange took place on the Glienicke Bridge. He walked across the now famous, or infamous, Bridge of Spies. That is the place that linked East Berlin and West Berlin, Berlin and Potsdam, where famous spy exchanges between the Soviet Union and Western countries took place. As the prisoner exchange unfolded, the KGB told Sharansky to walk straight across the bridge. As he started walking, he stopped. He then started zigzagging. The American authorities on the other side of the bridge wondered if he had been drugged, beaten, or had succumbed to illness. When he finally made it across the bridge to the Western side after tense minutes he was asked, “Why did you zigzag across the bridge?” He said, “Because the nine years that I was in prison I maintained my humanity and my dignity by never following their orders. At this last moment I was not about to follow their orders. They told me to walk straight, I zigzagged.”

Just three years ago I had the privilege of reenacting the drama of that zigzag walk with Anatoli Sharansky himself. It was the first time since February 11, 1986 that he returned to the Glienicke Bridge. As we commemoratively zigzagged across the bridge, I thought of his fellow bridge-walker, John Lewis, on Bloody Sunday. These two bridge-walkers held their heads high and brought down tyranny. They had another thing in common, they were both awarded the Presidential Medal of Freedom.

I was 19 when John Lewis, only 6 years older, heeded the call of God and walked across the bridge. I watched Walter Cronkite on the news report that evening with my grandparents. My grandparents also lived under tyranny, the tyranny of Czarist Russia and the tyranny of Lenin and Stalin’s Communist Soviet Union. One of them suffered terribly in the Ukrainian pogroms of 1919 to 1921, when approximately 40-60,000 Jews were murdered. When my grandfather, whose English language facility was limited, saw the Alabama State Troopers assault John Lewis and his fellow walkers, my grandfather had just a few words to say. These are words I will never forget. In Yiddish he said, “On that pogrom day, that’s what they did to us.” I needed no further political or historical commentary than those words. They have never left me: That is what they did to us. My family left Communist Russia and came to the United States. John Lewis did not leave the United States. John Lewis never gave up on the United States. John Lewis continued to walk with God as God had summoned Abraham. A magisterial Hassidic master, Rabbi Nachman of Bratslav, taught about this life: The entire world, all of it, is an extremely narrow bridge, and the main principle is never ever to be afraid.

On July 26, John Lewis “walked” across that bridge. 55 years ago, he walked across that very narrow, perilous bridge. He was beaten down, but he never fell off. In the spirit of Rabbi Nachman, John Lewis was not at all afraid to walk that narrow perilous bridge. He knew he would not fall off. On Sunday, July 26, John Lewis walked across that bridge one last time. It was a broad bridge that he walked yesterday. It was a bridge as wide as the goodness of his vision. His memory ever serves as a blessing.