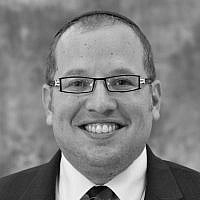 The Blogs
Noam Stein
Apply for a Blog
Advertisement
Please note that the posts on The Blogs are contributed by third parties. The opinions, facts and any media content in them are presented solely by the authors, and neither The Times of Israel nor its partners assume any responsibility for them. Please contact us in case of abuse. In case of abuse,
Report this post.

Often, after a Sunday Mincha or Maariv service, someone comes over to me and says something along the lines of, “I am so impressed with your girls. They come to shul all the time and they daven so nicely!” They mean my 14-, 12-, and 9-year-old daughters.

Truth be told, my daughters do daven beautifully. I am very proud of them, and their commitment and kavanah inspire me.

But my 10-year-old son is there in shul too, and rarely does anyone mention him.

The reason is obvious. Many other people in the Modern Orthodox shuls I have attended across the country also bring their boys to shul on a regular basis starting from a young age. Many Modern Orthodox parents I know insist that their sons daven with a minyan regularly. So, my son does not stand out. My daughters, often the only ones in the shul’s women’s section, do.

I understand, as I am sure many readers do, the cultural reasons why this phenomenon has developed. But I think it does our community a major disservice.

Therefore, I respectfully submit that if you are someone who values shul attendance, goes to shul yourself, and you generally believe in equality (whatever it means) for women, then you should bring your daughters to shul with the same frequency and sense of urgency and commitment as you do your sons.

I am not suggesting that we should create an obligation for women to daven with a minyan when there is none in Halacha. I am simply suggesting we should recognize that the ideal is to daven communally, as long as one is able.

And realistically, when we Modern Orthodox men get up on Sunday mornings, drag our pre-teen boys out of bed to go to shul, and leave our daughters behind, are our daughters helping to care for children? Are they cooking for Shabbos? For that matter, are they davening on their own, with some kind of feminine kavanah or personal techinot that only females are able to access due to their different halachic status? Or are they just getting to stay in bed longer, and sleep off a Saturday night at the movies?

If it is the latter, and I know that for many people it is, then what message are we sending our girls when we let them sleep in? I worry the message might be that their spiritual practice, their participation in serving God, and their presence in the central location of communal Judaism does not matter as much as their male peers’ does.

The main benefits of bringing girls to shul consistently from a young age are that davening in a formal setting with consistency helps most people take their davening more seriously, and that all people benefit from the merit of communal prayer. Additionally, when you take your daughters to shul, or even push them (appropriately and lovingly) to attend shul, you send them a message through action that their religious life matters to you.

Moreover, there are additional side benefits of bringing girls to shul consistently. I will mention a few:

They know when Selichot on a fast day are said. They know when we add V’ten tal u’matar at Maariv. They know we do say Musaf on Rosh Chodesh, that we do not on Chanukah, and that we do on Rosh Chodesh Chanukah. I have encountered many young people, boys and girls alike, who only daven in a minyan when they are in school. They are confused about these things, among others. But those who daven in shul regularly tend to know the norms of davening like second nature. By coming to shul, your daughters become comfortable, knowledgeable, and competent participants in shul life.

Women better understand, better appreciate and are better able to evaluate issues related to public ritual life when they have spent their lives immersed in it. Conversely, they are free from the complaint (fair or unfair) that I have often heard levied against women agitating about shul: “If they really cared about Torah reading or tefillah b’tzibur, they’d show up more often!”

Many shuls create programming, shiurim, policies and ritual practices with the input of members. The members who attend shul most often have an outsized voice. After all, the reasoning goes, why make programs that fit the needs of those who are not present when those who are present are asking for something different? Regardless of the wisdom of this approach, it seems to be quite common. A generation of women who grow up attending shul regularly can have a major impact on the programming that takes place in shuls.

One of the main arguments I often hear against women’s increased attendance in shul is that the environment is so male-dominated that it is uncomfortable for women, and, therefore, it is not really fair to expect them to attend. This may be true, but it leads us into a cycle that is difficult to escape. Bringing girls to shul from their youth, perhaps before they have developed some of the discomfort, can have the effect of creating the comfort needed for women to take their place in the shul and begin to have a more direct impact.

I had the opportunity a short while ago to travel around Israel visiting my students studying at various yeshivot and midrashot. I spoke to several dedicated educators who have been teaching young women for many years. I asked many of them about tefillah in their midrashot, and they told me about the various arrangements they had and shared a variety of thoughtful ideas about how to facilitate meaningful tefillah.

One thing that was common, though, was that it was not easy. Creating an environment in which tefillah is given the time, focus and gravity it deserves in an institutional setting without the rituals of tefillah b’tzibur is difficult.

I believe that a generation of young women raised since youth expecting to take part in organized communal tefillah every day will have an easier time finding, and expecting, a situation that works. I don’t know what that will be, but I am betting that young women raised with a commitment to tefillah in shul can help us figure it out.