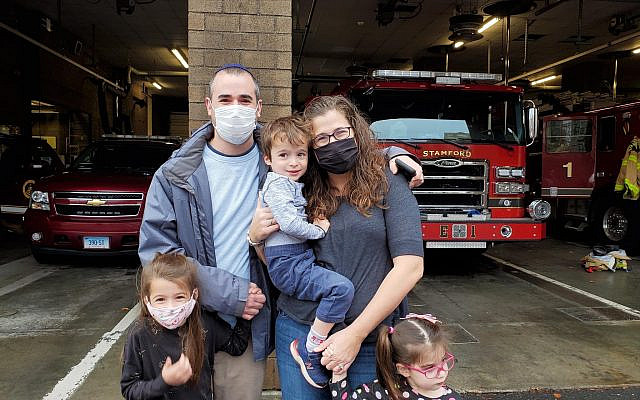 Matthew and Judith Bernstein, along with their three children, at the Stamford Fire Station. (Credit: Michael Feldstein)

For most folks, Thanksgiving Day means a day off from work, football games on television, perhaps a head start on Black Friday sales, and a festive meal with family members.

However, for a group of volunteers in Stamford, CT, it also means showing gratitude in a very special way.

For the past few years, several families have spent Thanksgiving morning visiting the local first responders in our community.

Families bring cake, cookies, and thank you cards to give to the first responders.  Later that day, the volunteers post photos and videos on social media – as they attempt to pay it forward and spread the word about their acts of kindness.

The idea was the brainchild of Rabbi Daniel Cohen, the Morah d’Asra of Congregation Agudath Sholom in Stamford.   Several years ago, he launched a campaign called The Elijah Moment, which encourages individuals to perform small acts of kindness – and the Thanksgiving campaign is one of several programs he has developed under this umbrella (facebook.com/elijahmoment).

“In the Tanach, Elijah is a prophet who appears through history to spread light in the midst of darkness,” said Rabbi Cohen.  “Our hope is that everyone will simply do something generous to help someone else each day. We may not be able to change the world, but we can certainly change the world of one person. One light, one act, creates a ripple effect forever!”

In one of the first Elijah Moment campaigns, Rabbi Cohen teamed up with Pastor Greg Doll of the Norton Presbyterian Church in Darien, CT, to give a free cup of coffee to patrons who were at the local Starbucks in Stamford. He created a six-minute video of the campaign, which has been viewed more than 6,000 times.

“In a world of increasing violence, our answer is to flood the world with acts of kindness,” said Rabbi Cohen.

The Thanksgiving program has been especially well received by both the volunteers and the first responders.  “We have been in touch with each of the stations, and they are truly grateful for our expression of thanks.  The policemen are especially appreciative, as they have unfortunately come under fire nationwide in recent years,” said Rabbi Cohen.

Interestingly, not everyone in our Modern Orthodox community marks the holiday of Thanksgiving.

A generation ago virtually all Modern Orthodox Jews celebrated Thanksgiving with a festive meal with their families, expressing their gratitude for being able to practice their religion freely in America and offering thanks for the many blessings in their lives.  However, recently an increasing number of families in our community have chosen not to mark the holiday, citing halachic opinions that believe such a celebration is in violation of the prohibition against chukat hagoyim.

Others decide to have a Thanksgiving “celebration” on Friday night, combining their Shabbat meal with traditional Thanksgiving foods (an odd practice, in my opinion, but one that I admit is quite practical, as it avoids the needs to prepare two large meals on consecutive nights).

Truthfully, I’m not sure why this trend developed in the Modern Orthodox community.  No less than an authority than the Rav, zt”l, stated that there is no issue of chukat hagoyim by participating in a Thanksgiving dinner, and according to Rabbi Aharon Rakefet, the Rav himself enjoyed a Thanksgiving meal with all the trimmings each year at his sister’s home.  Rav Moshe Feinstein, zt”l, also published multiple responsa in which he concluded that Thanksgiving is not a religious holiday, but a secular one — and that there is no halachic prohibition with an individual who wishes to celebrate Thanksgiving.

Whether you are inviting your parents and siblings for a full-course turkey dinner on Thanksgiving Day or choosing to spend your day off in a different way, I think one thing is for certain: the families who have decided to spend Thanksgiving morning expressing their gratitude to first responders in the Stamford community are demonstrating some of the most important Jewish values that we all cherish: gratitude, kindness, and love.

On this question, I think everyone would agree.