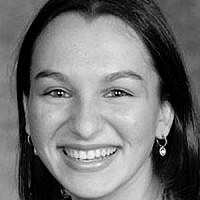 The Blogs
Samantha Fischler
Apply for a Blog
Advertisement
Please note that the posts on The Blogs are contributed by third parties. The opinions, facts and any media content in them are presented solely by the authors, and neither The Times of Israel nor its partners assume any responsibility for them. Please contact us in case of abuse. In case of abuse,
Report this post.

I woke up yesterday morning to the sun shining brightly and I was excited to see what the second to last day of Hasbara Fellowships would bring. The very long and draining day ended with me sitting in a dark room in tears, but I’m grateful for the experience regardless.

The morning was spent at the Stand With Us office, the Herodyon and touring the Judea and Samaria region of Israel, followed by lunch at the Gush Etzion Winery. At the winery, Davidi Perel, the mayor of Gush Etzion, spoke to our group about what it’s like to live in that region of Israel where many of the recent terror attacks have taken place. His talk was eye-opening and I felt that I could bring back some of what he said to Binghamton University’s campus. What I didn’t realize was that the two of the upcoming stops would impact me in a much more personal way.

We got on the bus and drove for about five minutes until the bus stopped and the doors opened. I felt a pit in my stomach because the tour guide told us exactly where we were standing, the spot where Ezra Schwartz was murdered in cold blood by a Palestinian terrorist just a few short weeks ago. Ezra Schwartz was an American yeshiva student studying on his gap year program in Israel, just like I did last year, and he was only at the bus stop where he was killed because he was handing out care packages to soldiers. I stood there with my thoughts and after a few minutes we boarded the bus again. I put my headphones in and put “Arim Roshi” (I will raise my head) on loop and tuned out everything that was going on around me.

After a few minutes, we arrived at the Oz Ve’Gaon forest, a forest named in memory Eyal Yifrach, Gilad Shaer, and Naftali Frenkel, the three boys kidnapped and murdered by terrorists at the start of Summer 2014. I switched the song to “Bring Back Our Boys,” a song of hope written after the boys were kidnapped, but before their bodies were found. I felt the tears welling up in my eyes, but I didn’t cry. I just sat there thinking, “Why?” I just don’t understand why all this senseless hate is necessary. I couldn’t get the idea out of my mind that it’s just not fair that all of these innocents have been killed simply for being Israeli or Jewish. These boys were all very close to my age and had barely even begun living.

Our next stop was Kfar Etzion to learn about the history of the Etzion bloc. We watched a video in one room and then everyone continued on to another room. I remained in the room where we watched the movie and broke down in tears. Once I started, I just couldn’t stop. My friends came back to try to console me, but I just needed to clear my head. All I could think was how many times during my year in Israel did I drive along the roads and stand in the exact spots where many of the recent terror attacks have taken place? Why is it fair that innocent people are not dying, but being murdered based on nationality or religion? The violence is not going to achieve anything.

Soon the lights in the room turned off. I didn’t get up. I just sat thinking, reflecting, and pondering how I can bring back my story, their stories, and Israel’s story to campus. My Israel isn’t one where I nervously glance behind me to make sure that I’m safe. My Israel is one that picks itself up every time it’s knocked down and continues living. After all, that is part of the reason I came to Israel this break: to make sure that the terrorists don’t win. So, I picked myself up, wiped away my tears, and kept on going.

About the Author
Samantha Fischler is 19 years old and a first year student at Binghamton University. She returned in June from a gap year in Israel studying at Midreshet Amit, where she also had the opportunity to participate in Jerusalem U's Oz Fellowship.
Related Topics
Related Posts
Comments