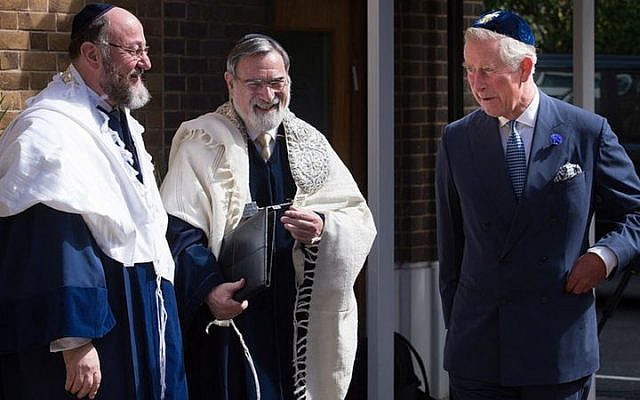 Following the death of Queen Elizabeth, the British Jewish community were quick to send their condolences to the Royal Family. Chief Rabbi Efraim Mirvis composed a special prayer to be said in all of the synagogues during the Shabbat morning services. His office also sent out the new  version of the Prayer for the Royal family which is said every week in most synagogues, replacing, for the first time in 70 years, the words “Our Sovereign lady Queen Elizabeth” with  “Our Sovereign Lord King Charles III”. 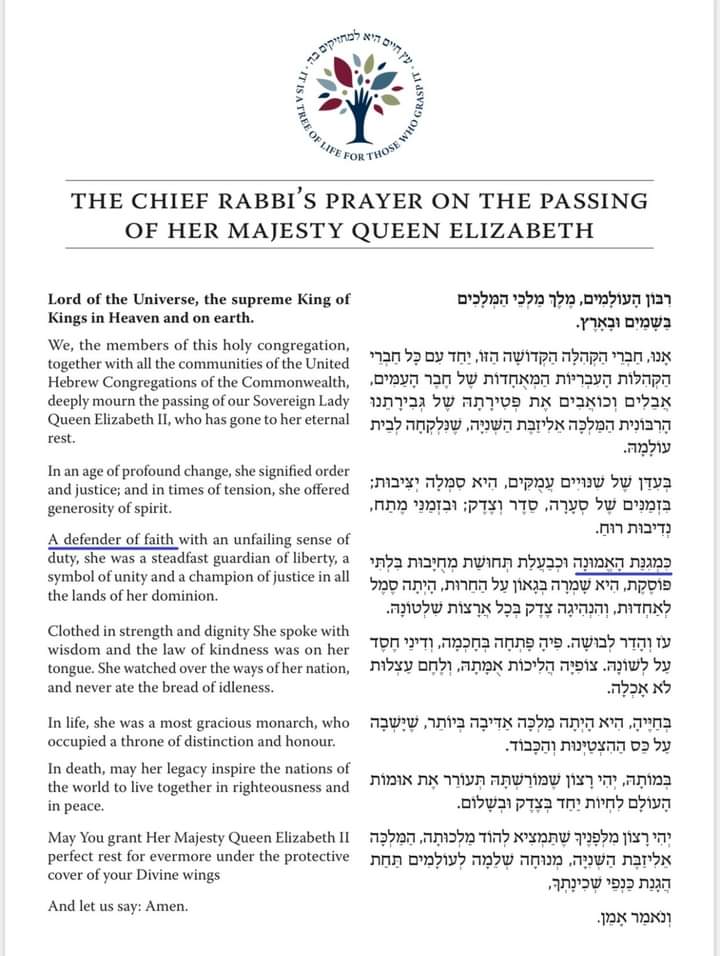 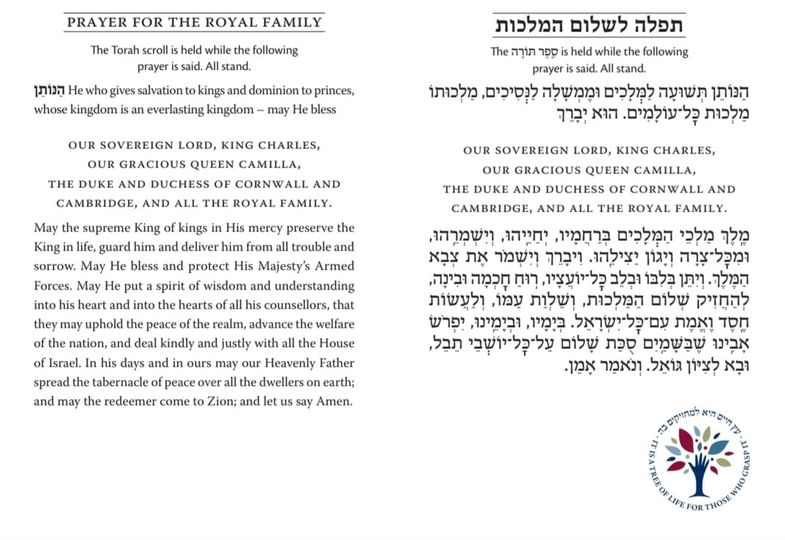 The new prayer for the Royal Family, prior to the announcement that William would also be Prince of Wales, to be recited in UK synagogues every week. Chief Rabbi’s Office Message sent for public distribution 09.09.2022

On the same day, an eloquent eulogy to the late Queen Elizabeth was expressed in the House of Lords by Lord David Wolfson, who emphasized the Jewish perspective on the death of the Queen, the gratitude towards her life’s work, and the automatic feeling of loyalty to the new King Charles III.  https://www.facebook.com/adam.kligfeld/videos/775152833813940

There has been a strong and warm connection between the Royal Family and the British Jewish community and, unlike what has been said in much of the Israeli press in recent days, between the Royal Family and the State of Israel, true, the Queen herself did not visit Israel during her long reign despite her traveling to almost every other point on the face of the globe, but this was largely due to the well known ongoing antagonism of the British Foreign office (until recent years) towards Israel, who recommended that she not visit this part of the world for as long as the conflict remained unresolved. Both the new King, Charles, and his son, now the heir and the new Prince of Wales, William, have visited Israel on a number of occasions, while a long list of British Prime Ministers, almost without exception since the days of Harold Wilson back in the 1960’s, have visited Israel, displayed a clear warmth towards Israel, and have hosted official delegations of the Israeli government in the UK.

The new incumbent of the office of Prime Minister, Liz Truss, has followed her immediate predecessors, Boris Johnson, Theresa May, David Cameron, Gordon Brown and Tony Blair, in expressing very strong sentiments in support of Israel, even suggesting that she may follow the example of Donald Trump and move the British Embassy to Jerusalem – although it is fair to assume that her Foreign Ministry will quickly talk her out of it.

If there is one member of the Royal family who has particularly strong connections with the Jewish community, it is the new King Charles III. He was a close friend of the late Chief Rabbi Lord Jonathan Sacks, ever since the time he offered Sacks a lift back to the UK from Israel in his private plane, after they both attended the funeral of the late Yizchak Rabin. Charles has attended a number of events in synagogues, including an Independence Day Event, as well as the induction of Rabbi Mirvis as the new Chief Rabbi almost ten years ago, both events taking place in the St. Johns Wood Synagogue in North London, adorned as it is with the magnificent stain glass windows of the artist David Hilman, a great uncle of President Isaac Herzog. King, then Prince, Charles was also the guest speaker at the retirement dinner of Lord Sacks where he commented, with some jealousy, that while Lord Sacks, who was the same age as him, both being born in the year of the establishment of the State of Israel (his words) could now retire, he, the Prince, had not yet even started his main job – which only started just a few days ago at the age of 73.

King Charles also has his own private kippa, with the Prince of Wales symbol on it, which he has used on his appearances at Jewish events – and we wait to see whether this will now be replaced with one which has the emblem of the monarch. 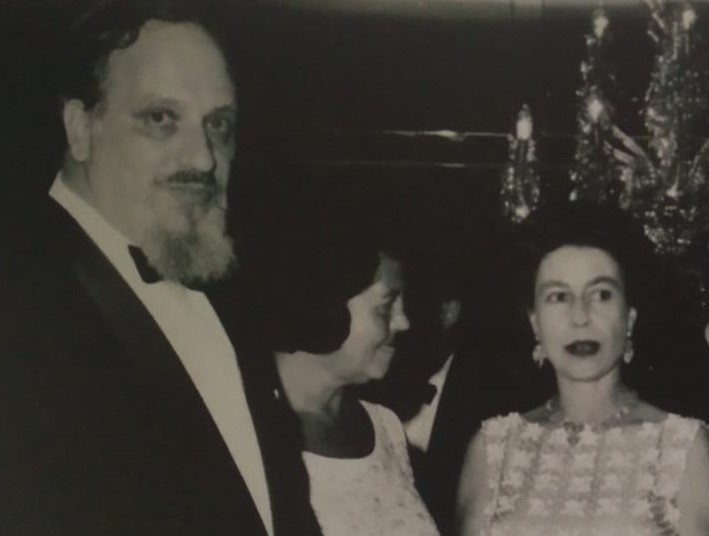 I am reminded of the time when, as a research student at the University of Durham in the late 1970s, I lived in the city of Newcastle which is located across the river from the twin city of Gateshead. The latter is famous for its ultra orthodox Jewish community, the main European yeshiva city, from where many of the world’s leading Lithuanian Rabbinical leaders (including those in Israel) have been educated. It is a community which is largely cut off from the wider world, but they are very particular about respecting the authority of the State and, in particular, that of the Royal Family.

In 1978, when the Queen and Prince Philip celebrated their first Jubilee as Monarch, they undertook a series of processions through the streets of all the major British cities and regions. In advance of their parade through Newcastle and Gateshead, the Rabbbi of Gateshead (the Gateshead Rov), Rabbi Betzalel Rakow, decreed that anyone in the community who had not, in their lifetime, made the blessing on seeing a ruling monarch, was obliged to line the street for the procession so as to fulfill this religious obligation.

Some weeks later, the then Chief Rabbi Lord Immanuel Jakobovitz, was at an event which was also attended by Prince Philip, the husband of the Queen. Philip mentioned to Jakobovitz that on their recent tour of the north east of England, they had noticed a group of ultra orthodox Jews amongst the crowd lining the streets and that, as their carriage went by, these people were murmuring something. Jakobovitz explained the religious commandment of saying a blessing when they encounter Royalty and he also told him about the prayer for the Royal Family which is said in most synagogues every week. To which, Prince Philip (the Duke of Edinburgh) is supposed to have retorted that this was a lot more than was done in the Church of England, of which the Queen was the titular head.

The British Jewish community is a small community and kicks well beyond its demographic presence, in all walks of life – from politics to economic and business, and from medicine, through the world of academia, medicine and the legal system. It is a community which is prominent in the world of charity to Jewish, to general and to Israeli causes – across the board. It is a strongly Zionist community and, in percentage terms, has the largest rate of aliya from a free country to Israel – although its presence and impact in Israel is, unfortunately, negligible. Recent estimates are of a community numbering somewhere between 270-300,000 people, which is no more than a third of one percent of the total population of the United Kingdom. During the past half century, most of the provincial centers have declined, as the community has concentrated in London (70 percent of the entire community) and Manchester. The most rapidly growing sector of the community is the Haredi sector, now numbering well over twenty percent of the entire community, displaying a strong sense of loyalty – hakarat hatov – to the British government and the Royal Family.

My parents’ generation, people whose parents or grandparents had come to the UK from Eastern Europe at the end of the nineteenth and early twentieth centuries as penniless refugees, and lived through World War II and the Blitz, had a strong sense of commitment to the British Royal Family. They would recount us with stories of how they lined the streets for the Queen’s wedding in the late 1940’s and her coronation a few years later. Although they all came to live in Israel immediately on their retirement, one of the few items of news which continued to interest them in the three decades they lived in Israel concerned the news and gossip about the Royal family. They felt a particularly strong attachment to the personality of the Queen, similar in age and having to deal with family and marital problems of her children with which they sympathized. For them, the Queen was a symbol of stability and the importance of family. They would, without a doubt, have been glued to the TV and social media coverage of the past few days were they still alive.

Reading the social media comments of many British Olim to Israel over the past few days, it would appear that the same sense of attachment to the British Royal family, remains inbred, regardless of how long they have lived here. I recall that, some twelve years ago, when Prince William married Catherine Middleton, I was invited to be a commentator on Israeli television. I was surprised by the large number of Israelis, with no connection to Britain whatsoever, who told me afterwards that they had been watching the events and that, unexplainably, they felt a strong warmth towards the British Royal Family.

Without doubt, one of the proudest moments of my professional career was the day, ten years ago, when I was awarded the OBE (Order of the British Empire) by the British government for my role in promoting scientific cooperation between Israel and the UK. I chose to receive the award at Windsor Castle rather than at Buckingham Palace, because I was assured that the Queen would “be on duty”, only to be left somewhat disappointed when, on the morning of the event, she felt ill and was replaced by her daughter, the Princess Royal, Princess Anne, with whom I had a fascinating  five minute conversation about Israel, its’ scientific community and Ben-Gurion University of the Negev.

For members of Jewish communities throughout the UK, it will take some time to get used to the new Royal prayer. Most have only ever known the version with Queen Elizabeth. There will, no doubt be a formal memorial service on behalf of the community within the next few weeks, as has been the case on all previous occasions when a Monarch has died, been crowned or has married. King Charles III will continue to be a welcome guest amongst the Jewish community and it is to be hoped that, unlike the late Queen, may yet pay an official State visit to Israel in the coming years. 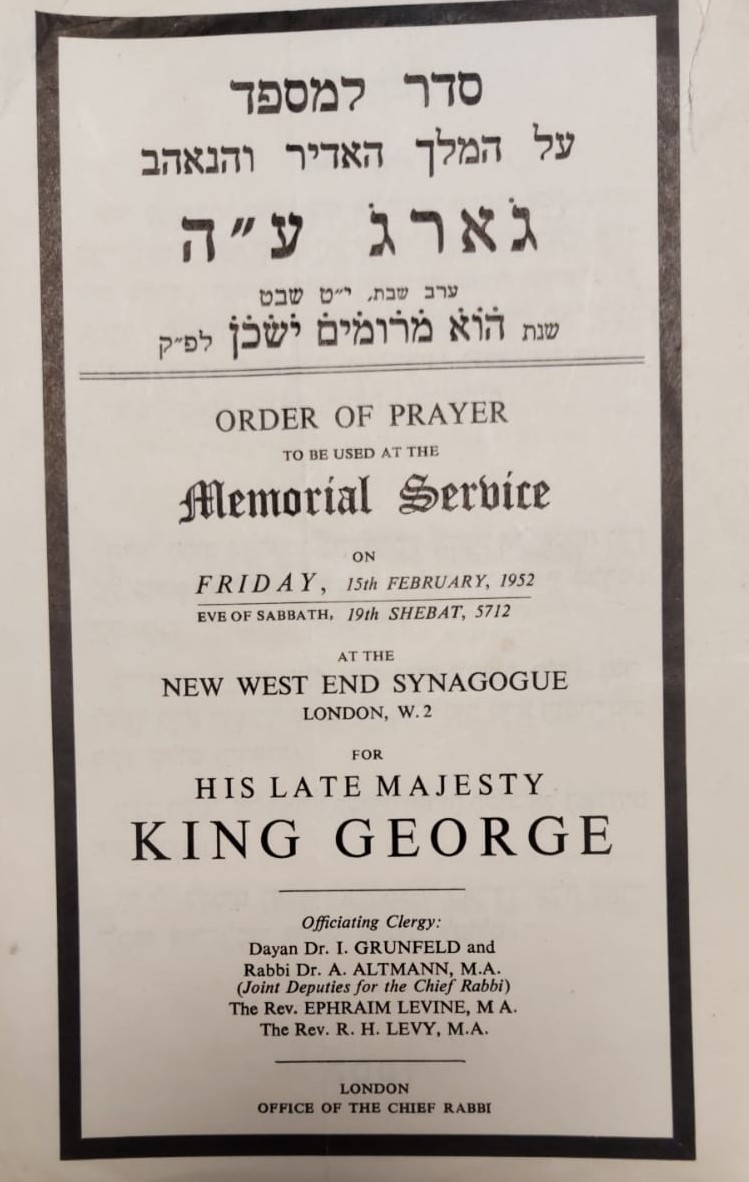 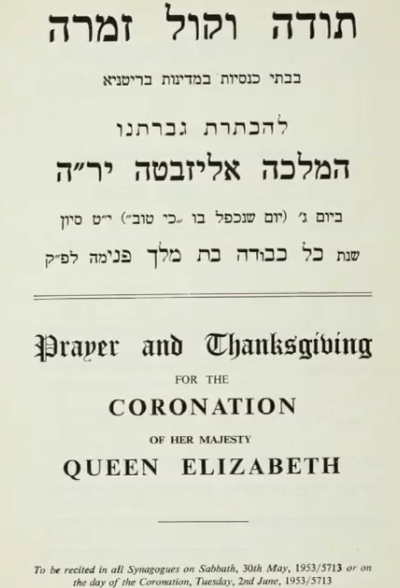 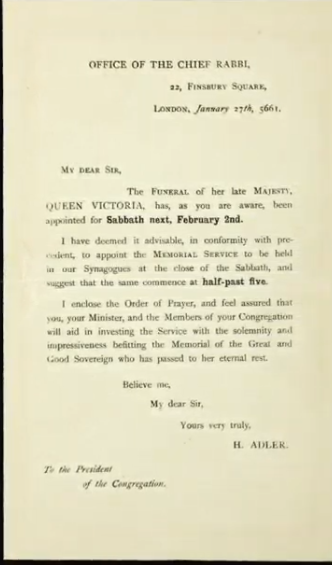 Memorial prayers to mark the funeral of Queen Victoria 1901. Private Collection – David Newman
About the Author
David Newman is professor of Geopolitics in the Department of Politics and Government at Ben-Gurion University of the Negev. BIO: David Newman holds the University Research Chair of Geopolitics at Ben-Gurion University, where he founded the Department of Politics and Government, and the Centre for the Study of European Politics and Society (CSEPS) , and served as Dean of the Faculty of Humanities and Social Sciences from 2010-2016. Professor Newman received the OBE in 2013 for his work in promoting scientific cooperation between Israel and the UK. From 1999-2014 he was chief editor of the International Journal of Geopolitics. David Newman moved to Israel from the UK in 1982. In 2017 he was selected as one of the 100 most influential immigrants to Israel from the UK. His work in Geopolitics focuses on the changing functions and roles of borders, and territorial and border issues in Israel / Palestine. For many years Newman was involved in Track II dialogues between Israelis and Palestinians.He has additional research interests in Anglo Jewish history, and is a self declared farbrent Tottenham Yid.
Related Topics
Related Posts