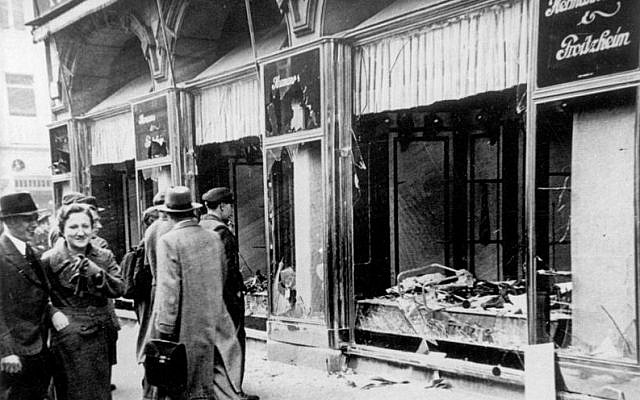 It is November 10, 1938, and Margot Gunther (Jeremias) is riding the train to school. It’s an hour ride from her home in Hoffenheim, Germany to Heidelberg where her school is.

As soon as she boards the train, she hears people talking. “Oh, we had such a nice time last night,” they say. “We demolished the synagogue. We demolished Jewish homes.”

For the next hour, Margot sits on the train terrified that the other riders will realize she is Jewish.

This two-day period, the 9th and 10th of November 1938, will become known as Kristallnacht, the Night of Broken Glass. As an old woman giving her testimony, Margot says, “I can still hear the glass shattering” from when she got off the train in Heidelberg that morning.

More than 80 years later, I read the news and sigh. Another idiot celebrity has said something incredibly offensive about Jews. And another group of idiots have started touting that statement as the truth that everyone must hear. And we find ourselves playing defense, again.

No one is demolishing synagogues or Jewish homes, but antisemitic attacks have continued to increase in recent years. The number of antisemitic incidents reached an all-time high in the US in 2021.[1] Antisemitic assaults more than doubled between 2020 and 2021.

We have long said that increased understanding of the Holocaust, especially the years leading up to it, is one way to address this kind of ignorance and hate. Kristallnacht is an essential part of that story.

Kristallnacht from the inside

I first heard Margot’s story at a NewCAJE conference at the University of Hartford.[2] I was struck by two unusual perspectives this story offers. I’d heard stories of terrified people hiding behind curtains as stormtroopers ransack their houses. I’d heard stories of Rabbis watching in tears, helpless to prevent the destruction of their synagogue and Torahs. What I hadn’t heard was stories of people trying to go about their daily lives in the middle of the pogrom, as Margot was.

However, although striking, it’s not actually Margot’s terror that I find most interesting here. It’s the Germans talking around her. The talk seems so innocent at first. “I had such a nice time last night,” they say. Oh? we want to ask, What did you do? “I demolished a synagogue.” Wait, what?

More importantly, however, they are people who believe the same antisemitic drivel that’s being spouted today. Which is why Margot’s story is so important.

Our 2022 Kristallnacht commemoration program will be a lesson in history interwoven with stories.[3]

We’ll hear the story of Herschel Grynszpan, whose act of assassinating a German diplomat in Paris was the excuse used by the Nazis to initiate the nationwide pogrom they’d been wanting to hold.

We’ll hear the story of Emmanuel Ringelblum, who documented the lives of the Polish Jews caught between the German and Polish border. Their plight was the reason behind Grynszpan’s attack.

And we’ll hear Margot’s chilling story of Kristallnacht itself.

Bringing us into the moment

All three of these stories, including Margot’s, will be told by modern storytellers. This is a deliberate decision – to have Margot’s story told in someone else’s voice.

We could have told it in Margot’s voice. Her recorded testimony about the event is compelling. However, the recorded testimony misses the opportunity to really pull our listeners into the moment. Margot speaks to an interviewer off to the side of the camera, and she is remembering. She tells the story as something that happened a long time ago. In her slight German accent, she says:

I was sitting there fearful they would not know I was Jewish.

Listening to the older Margot, there is a distance between us and young Margot. We understand her fear, but we do not feel it.

A live storyteller, speaking directly to their audience, can bring that audience into the moment in a deliberate way:

Here, we feel the terror, the rising panic of a twelve-year-old sitting alone on a train. With live storytelling, we feel it viscerally, deep in our guts. The storyteller’s description of the sound of breaking glass as Margot gets off the train rattles us.

Without the live telling, these stories become merely recordings in a library, texts on a bookshelf. Storytellers give a factual, historical story a modern voice and bring it back to life.

Where our story meets theirs

We are holding two version of our Kristallnacht program this year. I am telling Margot’s story for one. My 15-year-old daughter Esther is telling for the other.

Esther and I are both telling the same scene: that November 10th train ride. But our stories have different emphases.

I focus on Margot’s panic finding herself alone on the train in such a dangerous situation. Perhaps this reflects my perspective as the mother of teens.

Esther’s story, on the other hand, emphasizes the betrayal of the adult world. When Margot reaches Heidelberg, she hears people screaming “Kill the Jews!” Esther says, “Adults screaming.” From the mouth of a teenager, these two words tell a story all their own: a story of the fear born from no longer being able to trust the very people who were supposed to keep you safe.

I could easily have told Margot’s story in both programs. Esther’s telling, however, not only transforms her audience but also transformed her. Telling Margot’s story adds a layer of understanding and memory to Esther’s knowledge of the Holocaust. She has internalized Margot’s story as part of her own memories. She is a custodian of Margot’s memory.

This is how we fight that rising antisemitism, how we fight the ignorance and hate. By giving everyone the chance not only to hear these stories, but also to tell them. By making everyone a custodian of the memory of the Holocaust.

There is value in listening to professional storytellers but there is also value in training the rest of us to be tellers of Holocaust stories. There is particular value to giving these memories to young people to preserve.

Margot Gunther Jeremias (z”l) is no longer available to tell her story. But her story continues to enrich our understanding of the dangers of unrestrained hatred through storytellers like myself and my daughter. We preserve her story. Whose story will you preserve?

[1] According to the ADL: https://www.adl.org/news/press-releases/adl-audit-finds-antisemitic-incidents-in-united-states-reached-all-time-high-in

[2] At the Museum of Judaic Studies: https://www.hartford.edu/academics/schools-colleges/arts-sciences/academics/departments-and-centers/greenberg-center-for-judaic-studies/museum-of-Jewish-civilization.aspx. You can find Margot’s testimony about halfway down the page.

About the Author
Dr. Deborah Fripp is the president of the Teach the Shoah Foundation. Her website (www.TeachTheShoah.org) provides resources on commemorating, teaching, and understanding the Holocaust for communities, families, and educators. You can sign up to hear about her new blogs at www.teachtheshoah.org/subscribe.
Related Topics
Related Posts