Last month. Barely six weeks ago. It doesn’t seem possible, but that’s when my oldest son got up at his Purim bar mitzva celebration to give his speech.

Thank you to everyone for coming to celebrate my becoming a bar mitzva. I want to wish Happy Birthday to Bubby (whose name is Esther!), who will be turning 98 next week, bli ayin hara, and is with Aunt Norma in New York tonight…

Shortly after, the world ended, and when it will restart is anyone’s guess. But it will be without our Bubby, my mother’s mother, who left us just before Shabbat started. 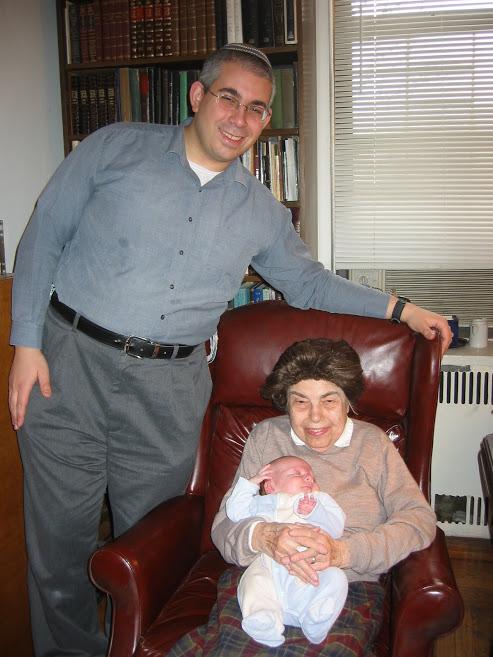 Me, Bubby and the bar mitzva boy, exactly thirteen years ago

I was Bubby’s oldest grandchild, and she was my last connection to the Greatest Generation, a generation which lived through the Depression, World War II and the Holocaust to see the founding of the State of Israel and the rebirth of Judaism.

I will never forget the food, the love, the fierce devotion to her family, to her faith, to the Jewish people and the Jewish State. My love for books and language started with her day job at Shulsinger Press. I remember being wowed by her Hebrew typewriter.

But the phrase I think I will never forget is “Bubby, sit down!” Because whenever you went to her home, on Haven Avenue or Overlook Terrace in Washington Heights, she was constantly on her feet. What could she get you? What did you need? Were you done with that; good, she’ll go get the next course. Because with Bubby, it was never about herself, it was about her family, her loved ones, her community.

Bubby deserves a funeral with ten thousand attendees, but of course there will be barely ten. Amid a global lockdown, most of her family and friends will not be able to pay her this final honor. They will not be able to receive the dozens, the hundreds, who would normally come to their homes for shiva. Kaddish will be said for her in bizarre, outdoor ad hoc prayer services.

And this would not bother Bubby in the slightest. Perhaps her neshama, her soul, decided to slip away and return to its Maker precisely at a time when we would be preoccupied with a global crisis. But we who remember her will never forget that she deserved so much more.