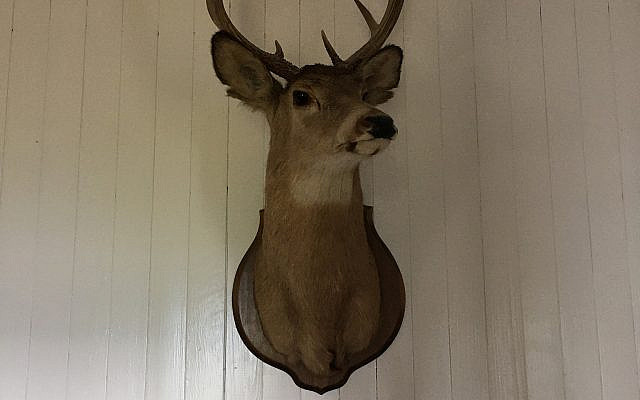 Some years ago, my husband and I bought a century-old lake house in the Adirondacks. It had been in the same family for more than seven decades when the property passed out of the family, and its right and left flanks sold off, leaving the original house to trade hands four or five times before we bought it in 2016, just in time for our country to teeter on the brink of insanity. But that’s not the point. The point is that when we bought the house, we also bought its insides—its ancient, peeling paint, iffy plumbing, mouse-chewed wiring, decades’ accumulation of doo-dads, knickknacks, gewgaws, thingamajigs, and tchotchkes, and an entire Book of the Month Club library, circa the Truman and Eisenhower administrations.

The house also came with a large, stately and perfectly preserved buck head mounted on the wall across from the front door. My husband and two of our three children thought it was cool—an authentic Adirondack ornament, long since killed and mounted, and what was the harm of keeping it? But it gave me the creeps. The former owner, apparently, had bought it at a garage sale and somewhat unoriginally named it Bucky. I renamed it Milton. It didn’t matter. It was still an enormous preserved neck, head, face and antlers of a once-living creature, who was now mounted on a wooden plaque and hanging on the wall opposite the lake, which it gazed at with its enormous, and sightless, glass eyes.

People go deer hunting up here. There are a lot of deer and millions of acres of forest, mountains and lakes. Sometimes when I go bicycling through the hills, I can hear gunshot in the far- or sometimes not-so-far distance. Sometimes I see hunters as they park their trucks by the side of the road and disembark wearing dark green camouflage, their rifles in their hands. Most pick-up trucks—and there are a lot of pick-up trucks in this part of the world—have gun racks, a sight I became used to when we lived in Baton Rouge, Louisiana, where deer and duck hunting is commonplace, as is talk of the day’s successes: how many shot, caught, or killed, how many got away.

How we humans like to kill. On the other hand, we also like to eat. Who can blame us? No food, no life. But also: Ein Kemeach, ein Torah; ein Torah, ein kemach. (No bread, no Torah; no Torah, no bread.) When Bucky/Milton the buck was killed, was the hunter hunting for food? Did the living animal become venison? If I knew that Bucky/Milton had died to feed a family, would his head on the wall cease to disturb me?

We have two dogs. Amir is an elderly and somewhat senescent (mainly) Australian Shepherd; Bella is a six-year-old, very sprightly (mainly) Alaskan Husky. Every time I looked at Bucky/Milton, I couldn’t help but think of Amir or Bella’s head up there, skinned, cleaned, stuffed, and preserved: a trophy. Decoration. Home décor.

There are any number of u-tube and other types of internet tutorials on DIY taxidermy for any number of animals you might want to display in your hotel lobby or restaurant dining room–including fish, turkeys, pheasants, bear, squirrels and even (good God) dogs. Because who doesn’t want to preserve their precious pooch for all eternity as an immobile object covered by its own skin?

What is wrong with us? And by us I do mean human beings, a species which I’ve belonged to my entire life and yet am not, at the moment, particularly proud of. Perhaps because we truly can be more monstrously cruel than all the wild beasts put together.

But back to Bucky/Milton, slain decades ago by an unknown hunter. Things between him and me got so bad that eventually my husband put the question to our rabbi, the question being: since the animal has been dead for such a long time, what’s the harm in keeping the thing? To which our rabbi, not surprisingly, said (and I summarize): Jews don’t hunt. He then suggested that we either sell it and give the proceeds to tzedakah, or give it a decent burial in the woods.

Nimrod hunted. So did Esau. But as far as the Bible goes, that’s it. For future heroes, kings, and prophets, shepherding was more like it, and after that, farming and the elaboration of the laws of kashrut. Even so, we Jews eat animals. But we don’t hunt for sport, because doing so is cruel, depriving an animal of its life for no good reason. You know what we do do for sport?

About the Author
Jennifer Anne Moses is the author of seven books of fiction and non fiction, including The Man Who Loved His Wife, short stories in the Yiddish tradition. Her journalistic and opinion pieces have been published in The New York Times, The Wall Street Journal, The Washington Post, the Chicago Tribune, The Atlanta Journal Constitution, The Newark Star Ledger, USA Today, Salon, The Jerusalem Report, Commentary, Moment, and many other publications. She is also a painter.
Related Topics
Related Posts
Comments
Advertisement