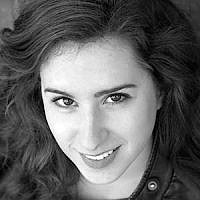 The Blogs
Maria Lilly
Apply for a Blog
Advertisement
Please note that the posts on The Blogs are contributed by third parties. The opinions, facts and any media content in them are presented solely by the authors, and neither The Times of Israel nor its partners assume any responsibility for them. Please contact us in case of abuse. In case of abuse,
Report this post.

As I laid my hand on the wall portion of Israel’s security barrier I heard Colonel (Reserve) Danny Tirza say, “I want to be the first one to take down this wall.” Moved and a little startled, I turned to look at him. The man who engineered Israel’s famous security barrier looked mournful, as he said the barrier was a tragic necessity. But a glimmer of hope appeared in his eye and a soft smile on his lips as he shared his hope for a future without a barrier, a future of peace between Israel and her neighbors.

On a mission to learn the truth about Israel and the security barrier I had the privilege of meeting with Colonel Tirza in Jerusalem on August 2, 2015. I heard the sorrow in his voice as he spoke about the death and destruction that necessitated the Israeli security barrier. As he described the horrors of the Second Intifada, the seemingly endless stream of terror attacks like the attack of July 31, 2002 where over 90 people, the majority of whom were adults under 30, including some Americans, were either killed or injured because a bomb was detonated at lunchtime in the cafeteria of the Hebrew University, I quickly became aware that the reality I know is not the reality Israel knows.

My fence is uniform; it all looks the same. Israel’s security barrier is comprised of 97% fence and 2-3% concrete wall and has built-in sensors that alert the Israeli Defense Forces if there is movement along the barrier, because that movement could be a terrorist trying to get into Israel. The security barrier is at no point attractive and the wall portion is especially unattractive. But the wall is a necessity; the wall protects Jerusalem’s highly populated and previously highly terrorized areas from attack, from Bethlehem on the other side of the wall. My neighbors do not seek to kill me and because of that I have the privilege of a simple wooden fence.

And while my Homeowners Association would be appalled if I made political, social or any other types of statements by use of graffiti on my fence, Israel allows graffiti on the wall as an expression of free speech. Colonel Tirza said paint that prevents graffiti from sticking was purchased but that it was decided the paint should not be used to prevent graffiti because free speech has more value than ascetics.

While my fence marks property lines, the Israeli security barrier rather than marking a property in is built mostly along the 1967 armistice line and wherever it needed to be built to ensure maximum security. While my fence pays no attention to whether or not the tree in my neighbors yard would be better off in my yard and accommodate it accordingly, the Israeli security barrier was built taking into account what communities wanted to be inside the West Bank and what communities wanted to be inside Israel and in the building of the barrier not a single Palestinian family was relocated.

My neighbor may not win a case presented to our Homeowners Association appealing our shared fence. Palestinians have on multiple occasions won appeals to the Israeli Supreme Court over the placement of the security barrier; the barrier is then made to accommodate the Court’s ruling like in the case of Beit Sourik Village Council v. The Government of Israel (HCJ 2056/04). Note that Palestinians challenging the security barrier’s placement are not Israeli citizens and are still permitted to challenge the Israeli government in the state’s highest court.

I do not mind my fence; to me it is simply a part of life. But the majority of Israelis are opposed to their security barrier, and who wouldn’t be? The security barrier is a reminder that Israel’s neighbors are trying to decimate and destroy her. The security barrier is inconvenient; it looks bad both literally and to the international community, but the barrier saves lives. From 2002 when the barrier was built to 2003 the number of terror attacks in Israel dropped 30% and the number of people killed by terrorist attacks during that time decreased by 50%. Saving lives is paramount, above ascetics and above international approval.

Israel seeks peace, its people are tired of conflict. Throughout Israel I saw multiple signs conveying a desire for the end of conflict with Israel’s neighbors. But the problem arises in this, Israel’s neighbors will agree to peace only at the price of the destruction of Israel and the death of the Jewish population therein. It sounds extreme, because it is. And the security barrier may seem extreme as well. But consider this, if my neighbor sought to kill me, I would build a stronger and bigger fence, one that would protect me. My purpose in this would be not only to protect my family and myself but also to give myself a semblance and a chance at peace. I may not be able to control my neighbor, but I can control my response, and I would want to respond in a way that protects myself while minimizing hurt to my neighbor.

This is what Israel has done. Israel has built a security barrier that protects all of its citizens, including Arabs, Christians, Druze, Jews and Muslims.

*Col. Tirza has independently confirmed the statements of this article through personal correspondence.

About the Author
Maria is a Journalism and Public Communications student at the University of Alaska Anchorage. She is also a Fellow with the Committee for Accuracy in Middle East Reporting in America.
Related Topics
Related Posts
Comments