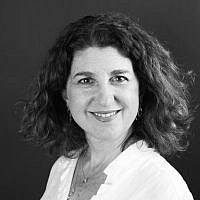 The Blogs
Noga Brenner Samia
Apply for a Blog
Advertisement
Please note that the posts on The Blogs are contributed by third parties. The opinions, facts and any media content in them are presented solely by the authors, and neither The Times of Israel nor its partners assume any responsibility for them. Please contact us in case of abuse. In case of abuse,
Report this post.

My son, 23, recently returned home from his almost-requisite post-army trip to South America. After intense combat service in the Israeli Defense Forces, he and his friends took a much-needed breather and now, almost a year later, are back asking themselves tough questions: where to work, what to study in college, when to move out– dilemmas college kids the world over face.

As a parent, rabbi and educator I ask myself, how do we get them to also think about bigger questions: What social causes do I care about? What type of community am I looking for? What kind of Jewish life do I want to lead? What values are important to me?

A typical non-Orthodox Israeli is expected to go through several defining stops on their journey to adulthood. Pre-school, school, youth movement, IDF, post-army trip (to South America or the Far East), university. At each stage along the way, that typical Israeli will have experiences that contribute to the formation of his/her Jewish-Israeli identity. In pre-school it may be when they were Ima/Aba shel Shabbat (the child chosen to light the Shabbat candles or say Kiddush on the wine) or when they waved a flag at the Yom Ha’atzmaut (Independence Day) parade. In school it may have been reciting a poem at the Yom Hazikaron ceremony (Memorial Day) or visiting Auschwitz for March of the Living.

But what about the university experience? Like in other countries, most college students here focus on developing their gender, sexual and career identities. Like elsewhere, students see college as a professional development track, flocking to fields of study that will propel them to the coveted high-tech sector. And like other nations, Israel has seen a decline in students studying the humanities. So, one question Israeli college students are not asking – and not much encouraged to ask – is what their Israeli-Jewish identity will be. The last “group stop” along the journey to adulthood in Israel is neglected for the most part when it comes to Jewish-Israeli identity formation – even though it may be the most important factor in determining their future politics, values, religious and community choices.

But university is an ideal place to nurture the Jewish and Israeli identities of our young people, and we need to be doing more to support them on that journey. We should be providing meaningful education that allows students to explore different facets of Judaism and Jewish culture and better understand their connections to world Jewry.

One guidepost on that journey should be through experiential learning – combining in-class learning with action-oriented, personal experiences that make the theoretical real. A class on gender issues in Judaism could include a visit with the Women of the Wall and a personal photo essay project. A seminar on non-traditional Jewish matrimony could take place in a bar, with guest speakers representing diverse Jewish approaches. Israeli students and Americans studying abroad could celebrate together at a Shabbaton, sharing customs and traditions.

One Ben-Gurion University student told me of the impact of meeting and learning with peers from the US through a course we designed at Hillel Israel, with support from the Julius Stulman Foundation. That “really opened a window for me into my own Jewish-Israeli identity…the texts, content and discussions gave us an opportunity to think, speak, listen, learn from and learn about Jews who are different than us and about ourselves.”

It may not be easy to get Israeli college students to contend with their Jewish Israeli identities, but by grappling with the big questions of Israeli society and the Jewish people writ large – they are transformed. Giving college students a healthy diversity of Jewish options and opportunities, will help them make mindful, conscious choices regarding their Jewish-Israeli lives on campus and beyond.

While we might not know who Israel’s leaders will be in 20 years, we know where they are now: On campus. At university – perhaps the last formal milestone in the identity-forming journey of an Israeli young adult – students are busy, as they should be, with life’s big questions. We need to also be asking them the bigger questions of our collective life inside and outside the only Jewish-democratic state we have. We need to help them on their Jewish-Israeli journeys too, because these students will ultimately help shape the character of our Jewish nation.

About the Author
As director-general of Hillel Israel, Rabbi Noga Brenner Samia leads Hillels at seven universities throughout Israel, building a pluralistic Jewish identity among Israelis and connecting them to peers in Jewish communities and at Hillels worldwide.
Related Topics
Related Posts
Comments