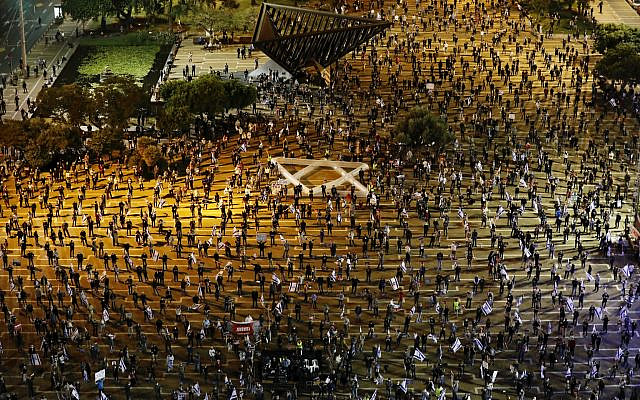 Israel is in the midst of one of the greatest upheavals in its history. The confluence of a medical emergency, an economic maelstrom, societal turmoil, and political distress has left the country and its citizens at loggerheads with each other. These multiple crises are coming to a head. There is now a widespread awareness that the status quo cannot hold: Israel in the years ahead will not be the same.

Out of the present pandemonium something new is beginning to emerge. Will it be, as the incoming coalition and its leaders would have it, a substantially expanded Israel geographically after unilateral annexation, but with increased challenges to its security, democracy and legitimacy? Or will it be, as the opposition to the present government (and still the majority of Israelis) insist, a democratic country with a Jewish majority and a state for all its citizens living in peace alongside an independent Palestinian state? These are the truly existential questions which will be decided in the coming months in an atmosphere rife with confusion and uncertainty.

This debate is taking place in an asymmetrical political environment. Those in power have a clear majority in the Knesset; they also have the ability to control the state apparatus in pursuit of their goals. Those challenging the trajectory proposed by the prime minister and his partners are at a marked disadvantage: not only do they lack the political clout of their rivals, but they must overcome the anger and the disillusionment that accompanied the formation of a unity government against their explicit intentions by the representatives they innocently ushered into office.

The absence of formal political power, however, does not mean that one is powerless. To the contrary, Israelis yearning for a decent, inclusive, egalitarian, and life-affirming existence — just like citizens of many other countries caught in the midst of the seismic changes that currently envelop them — are fast learning that, individually and collectively, they have a rich toolbox at their disposal not only to advocate change, but also to make it happen. The only impediment that stands in their way is passivity: succumbing to the loss of control over their destiny imposed by those who seek to maintain power through sowing disorder, strife, enmity and economic distress.

Here is a basic — and far from exhaustive — checklist of what each and every citizen committed to a just and fair Israel for all can do to promote their common vision.

The intricacies of the various proposals now on the agenda are often bewildering and poorly understood. Familiarization with annexation and its implications is a precursor to effective action. Following the news, listening to varying opinions, reading widely and critically, and weighing the multiplicity of arguments are crucial preliminary steps to consolidating one’s position and being able to defend it in the face of increasingly vicious attacks in the coming days.

The resources are now legion: books and articles abound, podcasts are available at the press of a button, multiple forums are open to discussion and exchange, the social networks are packed with information and analysis. Some organizations have written educational curricula and others are planning full-fledged programs. A transparent and realistic discourse is becoming available which shuns euphemisms (such as “extending Israeli law” to “Judea and Samaria”) in favor of direct terminology (annexation of the West Bank). Its precise use and constant repetition are in themselves forceful instruments of mobilization and change.

The motto for the short and long-term remains the same: stay informed. The old adage is even more apt today: knowledge is power. And the more accurate information accumulated and digested, the greater its credibility, persuasiveness and impact.

Individual action is important; working together with like-minded fellow-travelers creates communities of common purpose whose effectiveness may be even greater. It is relatively simple to sign on to one of the existing organizations devoted to ending the occupation and promoting Palestinian self-determination alongside Israel (Peace Now, Standing Together, Breaking the Silence, the Geneva Initiative, B’Tselem and Women Wage Peace are just a few among many such diverse groups today). It is possible, too, to convince civil society associations dedicated to social justice and equality to join the struggle (see, for example, the statements issued by Anu and Women Against Violence). Another, surely more audacious, effort, involves starting a new initiative. Building up different, preferably cross-cutting (Arab-Jewish; Russian speakers and Ethiopian Israelis) or unconventional (religious-secular; center-periphery) coalitions is especially rewarding. And joining existing and emerging political movements, however distasteful to many given recent experiences, is, under these circumstances, still a very compelling option.

Embracing and reaching out has the advantage of broadening the pro-democracy and anti-annexationist constituency, diversifying its components and amplifying its voice. It also assists in sharpening its key message: the inclusion of all Israelis, regardless of religion, national origin, ethnic affiliation, and gender in the new Israel.

The range of practical activities available to thwart the impending annexation and to guide Israel onto a renewed course of negotiation and reconciliation is simply immense, as is the list of possibility to eradicate deep-seated inequality. Many of these are already in play; others can be further developed and leveraged.

Individual citizens are already engaged in relatively easy — but hardly incidental — actions such as signing petitions, sending letters to the authorities, contributing to blogs, responding to posts, engaging on social networks, writing op-eds, participating in webinars, joining panels, lecturing (virtually or in person), and conducting political tours. Some choose to donate money; others their time in volunteering to help the needy or the marginalized. A few — despite the risk involved — go out of their way to comment on inappropriate behavior or speech by the authorities and fellow citizens, while still others assist their cohorts in times of distress.

Many activities are directed pointedly at decision-makers and state institutions. These include — but are hardly confined to — dispatching letters to elected officials, suggesting bills for legislation, submitting reservations on proposed legislation (most notably this past week on the draft bill to entrench emergency regulations in law), and, of course, petitioning the High Court of Justice on the constitutionality of particular measures. Together, these types of action serve notice that the conduct of the government is being monitored and its comportment scrutinized.

Still other activities, now conducted daily as the tension before July 1st mounts, focus heavily on augmenting an alternative presence in public spaces. The number and size of vigils, rallies, sit-ins, visitations (such as those following the outrageous murder of Iyad Halak in Jerusalem a week ago), and demonstrations has grown exponentially in recent weeks, culminating in the largest anti-occupation mass gathering of the last two decades this past Saturday evening. As these public displays have multiplied, so, too, has the viciousness of the responses from ultra-nationalist quarters — a clear indicator of the extent to which diverse civic action is beginning to level the playing fields.

Finally, a handful of people have gone one step further, announcing their refusal to take part in any act of annexation or calling for civil disobedience. They are thus serving notice that they are willing to employ every legitimate means — short of violence — to advance their cause.

Taken together, these diverse activities are beginning to make a mark. They can make an enormous difference. As more people overcome their reservations and adopt one or more of these techniques, their influence is growing accordingly.

An Israeli civilian groundswell is thus in the making. A growing number of Israelis are refusing to remain helpless bystanders. They are no longer waiting for decisions to be made for them but without their consent. They are resolved to be a significant force in determining their own fate and in building value-based alternatives for the future. They know that, at this juncture, they must choose: they can either be part of the solution or, if they waver, they will forever constitute part of the problem. Even though their activities are still dispersed, their common message is resoundingly pointed. They believe in a shared Israel in which all groups and communities live together in peace alongside their Palestinian neighbors. The success of their efforts depends on the active contribution of every single individual who believes in the same principles but has yet to join the struggle.

Don’t say you don’t have what to do; take at least one of these suggestions and just do it.