When I arrived at the demonstration last night at the Prime Minister’s residence, joining tens of thousands for the largest-ever anti-Netanyahu protest, my first instinct was to feel a slight unease. I was, I quickly noticed, one of the very few men wearing a kippah. The overwhelmingly secular and left-leaning demonstrators weren’t my “tribe.” I vote center, not left. If all you knew about the imminent elections was based on the parties campaigning among the demonstrators, you might have assumed that Labor and Meretz, the two left-wing Jewish parties, were about to win in a landslide, rather than actually hovering at the electoral threshold.

But as I walked the crowded streets around the prime minister’s residence on Balfour Street, I felt increasingly at home. It wasn’t primarily politics that was animating Israel’s most determined protest movement since the demonstrations against the high cost of living a decade ago. This was far more elemental: an attempt to reclaim the Israeli ethos from a corrupt and cynical politician with the gall to question the patriotism of his opponents. One older man held a sign: “We, the soldiers of 1973, have no other country.” There were hundreds of giant Israeli flags, and they weren’t distributed by the organizers. Protesters came carrying their own flags, some of them black-bordered, and the message was: You will not deny us our love for this country.

The kids blew horns and beat drums in a kind of exorcism, trying to expel the malign spirit that has taken hold in the prime minister’s residence. “The house is disintegrating,” one banner warned: Our national home is being destroyed. “Gevalt,” read another, invoking the Yiddish cry of anguish and alarm.

The posters were mostly hand-written, furious expressions of revulsion at Netanyahu for sullying Israeli values. Leah Goldberg’s poem, “In the land of my beloved / the almond trees are thriving,” was turned into, “In the land of my beloved / the thief is thriving.” “Lech lecha me’artzi u’mimoladeti,” one poster raged at Netanyahu, “get out of my country and my homeland,” an ironic echo of God’s message to Abraham in the Book of Genesis.

Some drew their metaphors from the approaching Passover holiday. “We are being held in bondage,” one poster read. “Let my people go,” read another. Yet another was a play on the Haggadah’s evil son: “The corrupt one, what does he say? What are all these laws for you – for you, not for him.” One couple wore t-shirts imprinted with the words, “Bi’ur hametz,” referring to the pre-Passover ceremony of burning bread, symbolically purifying one’s home of leaven. More deeply, the ceremony is intended as a symbolic cleansing of the negative traits within us. This gathering, then, was no mere protest but a collective ritual, purging the hametz from our national soul. 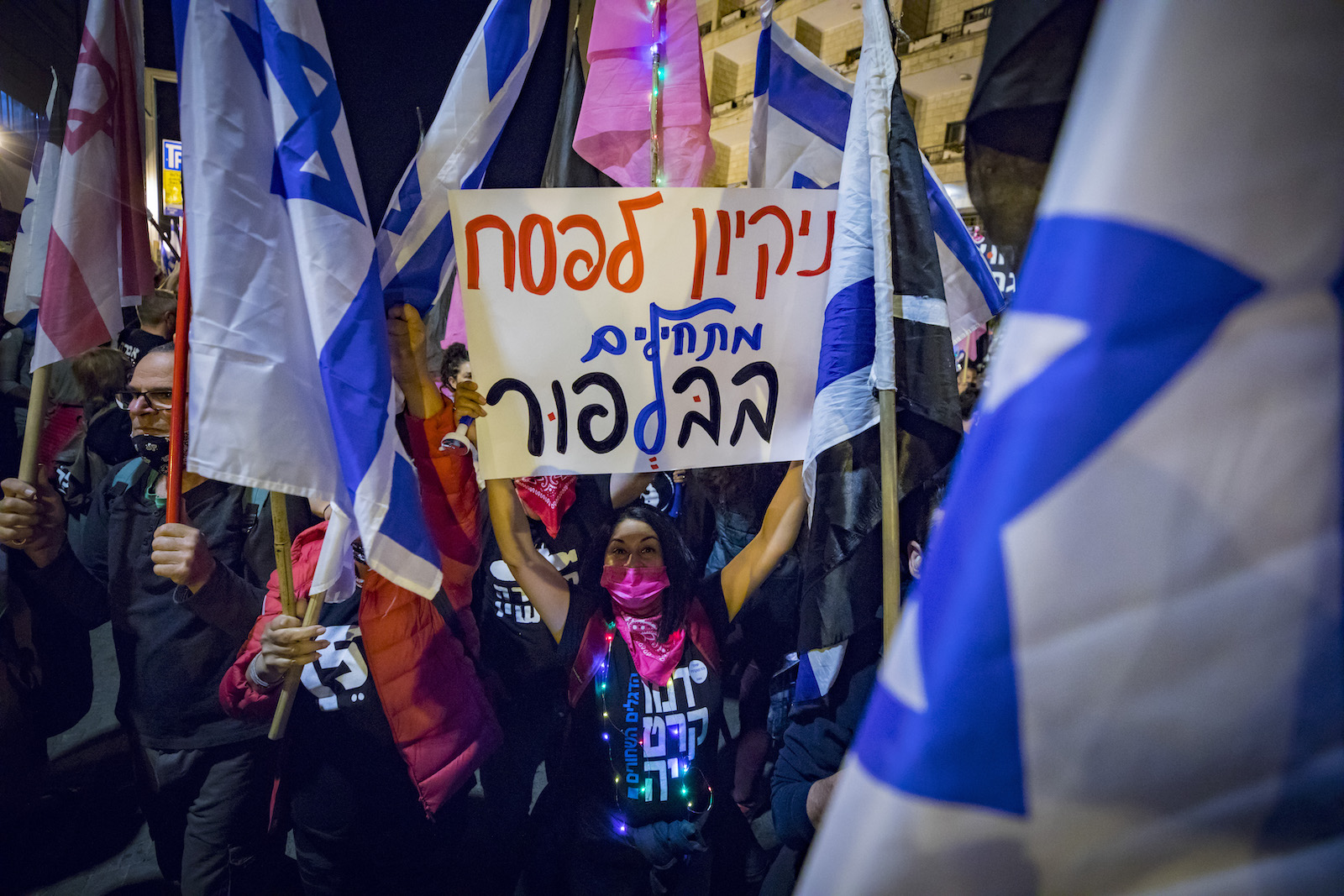 ‘Pesach Cleaning Starts at Balfour’: At a protest against Prime Minister Benjamin Netanyahu, near the Prime Minister’s official residence in Jerusalem on March 20, 2021. (Olivier Fitoussi/Flash90)

However unintentionally, the demonstration revealed how deeply secular Israeli identity is infused with Jewish values. The young people at Balfour Street weren’t deliberately evoking Jewish themes; those were simply the basis of their Israeliness. Their very lack of self-awareness was precisely what Zionism had intended: a public space that would create an instinctive Jewish culture, without the self-consciousness of a minority. Zionism provided an answer to the vexing question of how to maintain a strong Jewish identity in a secular era. The demonstration at Balfour Street was the triumph of Zionism’s cultural vision.

The other day, walking in my Jerusalem neighborhood, I passed secular parents with their young child, who was entertaining them by reciting the ten plagues. Of course the demonstrators on Balfour Street drew on the Haggadah for their slogans: They’ve been singing its songs since kindergarten.

One man with a kippah held a sign that read, “Netanyahu forgot how to be a Jew!” The reference was to an incident, during Netanyahu’s first term as prime minister in the late 1990s when a reporter’s microphone eavesdropped on his conversation with a prominent rabbi: “The left has forgotten how to be Jews,” Netanyahu said then.

In the last few years, the Prime Minister has turned that lie into a political survival strategy, dividing Israelis into good Jews and bad Jews. One poster on Balfour Street juxtaposed two photographs: The first was of Herzl, “hozeh hamedinah,” visionary founder of the state; the other was of Netanyahu, “hotzeh hamedinah,” divider of the state.

Of all his many offenses, denying the Jewishness of his opponents and trying to poison one part of Israel against another may be the crime for which history most harshly judges Prime Minister Netanyahu.