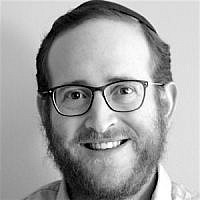 The Blogs
Shaul Rappeport
Apply for a Blog
Advertisement
Please note that the posts on The Blogs are contributed by third parties. The opinions, facts and any media content in them are presented solely by the authors, and neither The Times of Israel nor its partners assume any responsibility for them. Please contact us in case of abuse. In case of abuse,
Report this post.

Here we are. We have all made it to “the other side” of the election. Many are pleased with the outcome while many are absolutely devastated. Most were quite surprised. What wisdom can we share at such a polarizing and divisive moment in our nation’s history?

I want to briefly discuss the surprise element. There have now been several pieces in the media about the “bubble effect” also known as the “echo-chamber effect.”  This phenomenon is something that is taking place on social media sites, such as Facebook. Social media sites are programmed to get you information that you are most interested in by using advanced algorithms to identify what you like and identify with. Sounds like a good thing, right? The negative side effect is the “bubble effect.” People are increasingly surrounded in a virtual media bubble that they create for themselves, often unwittingly. This creates the false illusion for an individual that everyone (or at least, “most people”) agrees with them, as they are constantly receiving media that reaffirms the reconfirms their beliefs and values, and never seeing anything that challenges them.

The “bubble effect” has a terrible effect on society. As part of the Modern Orthodox community, we pride ourselves on our openness and ability to engage the modern world. Sometimes, we even criticize the ultra-Orthodox community for building a virtual wall around themselves to keep out outside influences and dissenting opinions. The “bubble effect” is suggesting that many of us have done exactly that; constructed a virtual wall around ourselves surrounding ourselves only with the ideas that we believe in and agree with. This is why so many people were totally and utterly shocked at the result of the election: The millions of people who supported the President-Elect were outside of their “bubble” and they did not notice how strong a movement they had become.

As followers of the rich Jewish tradition of diversity, it is so important that we “burst this bubble” and not allow ourselves to be virtually walled in to a self created universe where there is no discussion or dissent. But in order to successfully do so, we may just need an extra dose of civility and compassion.

If you supported Mr. Trump, do not gloat or flaunt your victory in the faces of those who did not. Understand that this is a very difficult and painful time for many who believed in the vision and views of Secretary Clinton. If you supported Secretary Clinton, you may need to give yourself some time to grieve and accept the reality and that is ok, but realize that those who did not agree with you are not a benighted enemy, rather they too are dedicated citizens. The most important thing is civility, compassion and mentchlekhkayt. We must all learn how to reach out, embrace and love the “other,” the other with whom we disagree–even disagree vehemently. We must come to recognize that truly, they are not an “other,” but rather another “Imago Dei” exactly like us. If we can do this, then America really will be great and stronger together.

About the Author
Rabbi Shaul Rappeport is the rabbi of the Lido Beach Synagogue, in Lido Beach, NY, a stunning beach suburb of New York just 45 minutes from Midtown Manhattan. He is also the Director of Rabbinic Services & Outreach for the Puah Institute, a global organization dedicated to helping people struggling with fertility difficulties in the Jewish community. He can be reached at rabbi@lidoshul.org.
Related Topics
Related Posts
Comments