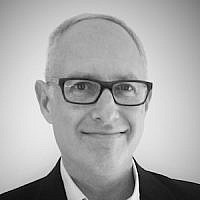 The Blogs
Ely Simon
Apply for a Blog
Advertisement
Please note that the posts on The Blogs are contributed by third parties. The opinions, facts and any media content in them are presented solely by the authors, and neither The Times of Israel nor its partners assume any responsibility for them. Please contact us in case of abuse. In case of abuse,
Report this post.

About to leave my office, my patient turned and asked, “How do I know that I don’t have a brain tumor?”

Linda (not her real name), a woman in her 40s, came to my office for an unscheduled “urgent” visit.  She was concerned about weakness on one side of her face that was not going away. The referral from her primary care physician stated that Linda, who is normally healthy, developed difficulty in closing her left eye and she noticed that the left side of her mouth drooped. Her doctor identified the condition as Bell’s Palsy, a common form of facial weakness that results from inflammation of the facial nerve. No one really knows why this happens to otherwise healthy people — perhaps it is due to a viral infection that produced no other symptoms. In any case, Bell’s Palsy is generally a benign condition that gets better within several weeks or months[1].

During my interview of Linda, I learned that her facial weakness was mild even at the outset, but it was not going away after three weeks.  Her neurological examination was completely normal.  She had mild facial weakness, which was evident to the trained eye and to Linda but would not have been noticeable to others had she not drawn attention to it.  So, I assured her that her problem was nearly resolved and that she could go back to her full array of activities. She seemed happy, got up from her seat, and reached for the door handle when she stopped and asked how to be sure that she does not have a brain tumor.

And so, Linda came out with the true reason why she came to see me. The minor degree of facial weakness was not her problem. What really bothered her was the nagging thought that her Bell’s Palsy might signify a much worse problem — a brain tumor.

Linda is not alone. In fact, in my experience, many patients who come to a neurologist state one complaint, but harbor a different secret worry or anxiety about serious brain disease. Often it is a brain tumor, but the anxiety may also relate to Alzheimer’s disease, Parkinson’s disease, multiple sclerosis, or other disabling diseases that the patient is aware of. And, it is no wonder. Nearly everyone has a relative or neighbor with serious brain disease, and certainly everyone has seen news stories showing pictures of people suffering from brain injury.

Linda’s concern is understandable. Not having been trained as a neurologist, she has no way of knowing whether the weakness that she experienced is a symptom of a brain tumor. And, her experience has provided her only with images of devastating brain disease, since those are most noteworthy and salient, and those are what are shown on the news. There are no news reports on the vast majority of brain injuries that got better on their own within a few weeks — those are simply not interesting to people. Yet, from the viewpoint of a patient who must estimate her chances of having a serious brain disease, what she really must know are the statistics of all the cases, not just the most devastating ones.

According to research in behavioral psychology, people generally are greatly influenced by the facts that are more familiar to them, incorrectly concluding that what is more familiar is more common.  Nobel laureate Daniel Kahneman and Amos Tversky called this error of thinking, the Availability Heuristic[2]. They found that people have a strong tendency to take a mental shortcut and overvalue whatever is readily recalled, rather than weighing all the evidence.  An example of this is that people fear shark attacks, because they think that the chance of dying from a shark attack at the beach is much higher than it actually it is. The news stories showing mutilated bodies following rare shark attacks make these memories easy to recall.

In Linda’s case, her memories are likely stacked with images of debilitating brain disease, out of proportion to their true likelihood. So, when she experienced her weakness, the availability bias directed her thoughts to conclude that she likely has a brain tumor. This can happen even when there is no real neurological dysfunction, like Linda had. Many people have minor unexplained tingling, pain, twitching, or weakness. These real experiences trigger the same catastrophic thought process as in Linda and result in anxiety about severe brain disease.

Very often, people do not tell their doctors about their true worry. So, the doctor deals with the immediate issues and treats the superficial complaint. In that case, the patient leaves the office with the same worries as when she entered.

The worry then starts to take on a life of its own, by snowball effect.  A small itch that would have gone unnoticed is interpreted by the anxious patient as further evidence of the brain tumor, thereby increasing the worry. Then, the minor head pain that accompanied stress at work becomes definitive proof of the devastating disease.  There is no way out of the loop until the patient is convinced that she does not have a tumor.

So, what did I answer to Linda’s question?

I explained to Linda that I do not suspect a brain tumor or any other serious brain disease. How do I know?  Because the features of her condition that she told me in the interview, combined with the entirely normal neurological examination, were characteristic for Bell’s Palsy, and were not suspicious for a disease of the brain itself. I explained briefly that her problem was due to something that harmed the nerve outside of the brain, and there was no reason to think that she had anything wrong inside her brain. Linda got it. She immediately took a deep breath, relaxed, and thanked me for helping her.

Linda’s worries were normal — and she was able to find relief with my reassurance. But, sometimes, people continue to worry even after being reassured by experts that they have no reason to worry. In many cases, doctors order extra tests to reassure the patient, as if a normal MRI would provide the ultimate proof. But, the patient can still be inconsolable, saying, “but, how do I really know — sometimes tests can wrong?”

Excessive worrying can be a symptom of an anxiety disorder, if it interferes with normal functioning. If that is the case, a psychiatrist can confirm the diagnosis and offer treatment options, including CBT (cognitive behavioral therapy), self-help and support groups, stress-management, or medication[3]. For people with mild anxiety, medication is usually not needed. Entrenched thoughts of devastating disease may not disappear as soon as the doctor reassures the patient.  It may take several days or weeks, depending on the individual.

So, what should you take away from all this? First, Linda is not stupid, nor is she crazy. She is normal. Second, it was very important for Linda to express her true worries, rather than leave my clinic with the same worries that she came with. I was able to address them head-on and see that she understood my message.  Finally, excessive anxiety can be a serious problem that interferes with normal function, and then it should be treated as an anxiety disorder.

At the end of the day, the doctor’s job is to treat the person, including the physical problem and the mental baggage that comes with it.  Human brains are not rational computers that operate blindly on plain facts and figures.  We construct stories that direct our thoughts to conclusions that are sometimes incorrect, and often that can lead to irrational worries about very unlikely occurrences. That is human thinking — often very efficient, and sometimes misleading. Humility on the part of the doctor can leave room to treat the patient’s worry as legitimate, rather than an affront to his expertise.  And, humility on the part of the patient can leave room to back down from the worrying, once reassured by the doctor.

The author is an adult neurologist working in Modiin, Israel.  He is also Assistant Clinical Professor of Neurology at Albert Einstein College of Medicine.  He recently published Embracing the Unknown: A Fresh Look at Nature and Science, a book on the wonders of the brain and other aspects of nature.

[1] Bell’s Palsy affects approximately 40,000 people each year in the US alone, generally between the ages of 15-60.  Rarely, it is due to trauma or compression of the facial nerve and could result in lasting dysfunction.  For more information, see https://www.ninds.nih.gov/Disorders/Patient-Caregiver-Education/Fact-Sheets/Bells-Palsy-Fact-Sheet

[2] A heuristic is a rule-of-thumb in our thinking patterns to help find quick solutions to problems.  The Availability Heuristic is commonly used by our brains to judge how common something is.  Advertisers know this – the more they show you a product, the more you are likely to think that it is widely used.  For more information, see https://en.wikipedia.org/wiki/Availability_heuristic

About the Author
Ely Simon is a neurologist with a passion for educating others about the complexities of the brain. He specializes in developing pioneering approaches to diagnosing and managing brain diseases. In 1984, Simon graduated from Columbia University with a bachelor of science in electrical engineering. He received both a master’s degree in biomedical engineering and a medical degree from Case Western Reserve University. He began his training in neurology and neuroscience at the Albert Einstein College of Medicine in New York and completed it at the National Institutes of Health in Bethesda, Maryland. Simon has served on the faculty of the Department of Neurology at the Tel Aviv Medical Center in Israel and the Albert Einstein College of Medicine. He currently lives in Israel with his family.
Related Topics
Related Posts
Ely Simon
Comments