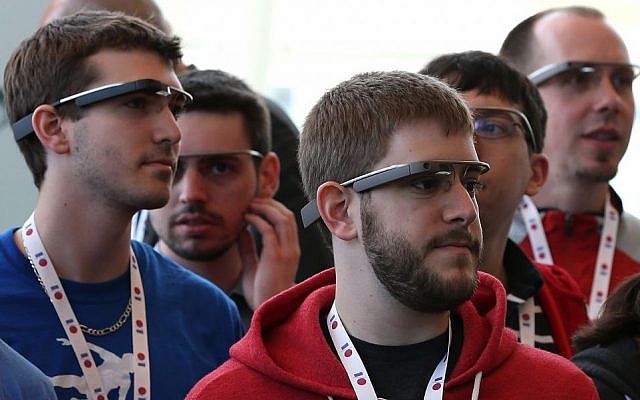 I remember when I first saw a pair of Google Glasses (GG). I had, like so many other people, heard about the technology and impatiently waited to see the first demonstration. The concept was mind-boggling. Even though this first version of GG required that you have your mobile phone nearby [for connectivity], it still was hard to believe that any significant amount of computing power could be compressed down into a unit that would fit on a pair of glasses.

I found that quite a number of colleagues failed to appreciate the significance of the GG technology. It seemed obvious to me that the ability to take photos, record video, look up information and to communicate with others, would transform the personal computing experience for everyone, not just physicians.

I actually found it somewhat annoying that some of the naysayers were effectively repeating what was said about mobile phones and their value in the medical world. These days, a medical student will already have a whole range of medical applications installed on his or her mobile phone, before their first formal class. On the floors, the medical students will be scurrying behind the residents and the attending physician, while doing morning rounds on the patients. Multiple times during this morning visit to all the patients, the students and even the residents will be using their mobile phone or tablet to look up information specifically on the patient in front of them, or to look up information on the patient’s disease.

Just a few years ago, hospitals  refused to allow physicians to access patient records using the doctors’ personal mobile devices [because of security issues]. Today, due to endless pressure by the physicians on the IT departments of the hospitals, doctors can readily connect both to the Internet and to the internal network of the hospital via their mobile devices. This acceptance of personal mobile devices by the hospitals was predictable, as there are three things in life that are inevitable: death, taxes and technology. I should note here that technology is trying to eliminate the first two items on the list.

So, if mobile devices and tablets became ubiquitous regardless of negative pressure from the hospitals and IT departments, why should GG not succeed? GG is much less intrusive, connects via the doctors personal phones [which have already been cleared for access], and with the proper software, GG could improve quality and reduce costs.

There is another reason why so many people, including myself, expected GG to succeed,  namely because of the first G in its name. When a small start up tries to introduce a technology, everyone knows that this is a high risk venture and that even good ideas do not get picked up. But when Google decides to develop a product, support it, have software written for it, integrate it into the rest of Google’s infrastructure, how could such a technology fail?

The simple fact is that GG has, for all intents and purposes, failed. Before any of Google’s competitors smirks, each of them has experienced monumental failures of their own. Microsoft had Vista and a very poor initial version of Windows 8. Microsoft also tried developing specialized phones for targeted audiences, which left Microsoft with a multi-hundred million dollar loss. Microsoft’s purchase of Nokia is still not proven to have been the right choice. Amazon has lost a fortune on its devices, exceeding Microsoft’s losses. Admittedly, Apple doesn’t seem to make too many major mistakes, and may be the first company to become worth 1 trillion [i.e. 1000 billion] dollars. Nevertheless, big time failures are part of the game even for the biggest players.

There are many reasons quoted for GG’s lack of success. In the general population, many people complained that GG’s little red lights [indicating that it is functioning] made them feel as if they were constantly being monitored. Newsflash – everyone on this planet is constantly being monitored by cameras or satellites or a whole range of other “sleuthy” technologies. Why people were so sensitive to GG is still not clear.

Another suggested reason for GG’s failure to gain widespread adoption, was the lack of a killer application. Apparently, being able to capture a moment with a simple verbal command, versus fumbling for your phone so that you both miss the moment personally as well as miss the photograph, was not considered worthwhile. I still argue  that every doctor should be wearing GG’s, or perhaps a competitor’s version.

Things can happen very fast in medicine, and when bad things happen, it is definitely not convenient to pull out your phone and dedicate at least one hand to holding your phone in place. With GG and a couple of programmed voice commands, a remote senior physician could be notified of the deterioration in the status of his or her patient. Once notified, the senior physician could choose to start a conversation with the on-site physician.

Just this one scenario, in my humble opinion, should have been enough to place a pair of GG’s on the face of every doctor in the hospital. Voice recognition and especially high quality voice-to-text conversion, could be the long sought after solution to proper and complete documentation of the patient history and examination. In the event that a doctor would want to review a protocol for a given condition, the doctor would only need to speak the command and the information would appear on the doctor’s mobile device or desktop computer.

All of this is assuming that GG would never advance beyond its present state. But Google continues to stay committed to GG technology. I would expect that every smart device out there would connect to GG. So for a doctor, a smart stethoscope and otoscope would automatically connect to GG, the doctor’s smart phone and then ultimately the patient chart. GG could even connect to a smart ECG machine so that the physician could immediately review the generated ECG on the patient and rule out a heart attack or abnormal rhythm.

Some argue, very legitimately, that the price of GG simply made it impractical for most people. The first version continues to be sold for over $1500. That amount of money buys a lot of other technology  that people really do feel comfortable with and use on a day-to-day basis. That amount of money is almost an investment in the technology. I, like many others, suspect that if GG had costs $300, it would have become far more popular. The more popular it would have been, the more that programmers would have designed software for it. Eventually, killer applications would have been designed and GG would be as popular as iPads.

Facial wearable technology will become mainstream. GG technology will shrink and be totally Incorporated into regular sized frames. Once that “Terminator red light” is eliminated, people on the street won’t even know who’s wearing GG. Length of battery life issues will be dealt with far better, connectivity to other  programs systems will improve, and ultimately, GG will transform from being an annoying luxury, to being a critical necessity.

I’d like to make one final point that relates to anybody and everybody in the start up business. When companies the size of Google and Microsoft and Amazon can get it wrong, such that their technology nearly or even completely dies off before a follow-up technology succeeds, how can any group of three guys in the garage  hope to make it. But the reality is that every day, one of the very many startups out there, does manage to get funding and to progress to marketing and sales. And at this point, some startups make it and some don’t.

The startup’s idea and implementation might have been brilliant. That is not a guarantee of success. The startup may have been very well-funded and had an A-Team of developers and managers. Still no guarantee. Anyone who gets into the startup world, has to be  of a very special character to withstand the challenges that they will face. All that I can do is wish everyone good luck.