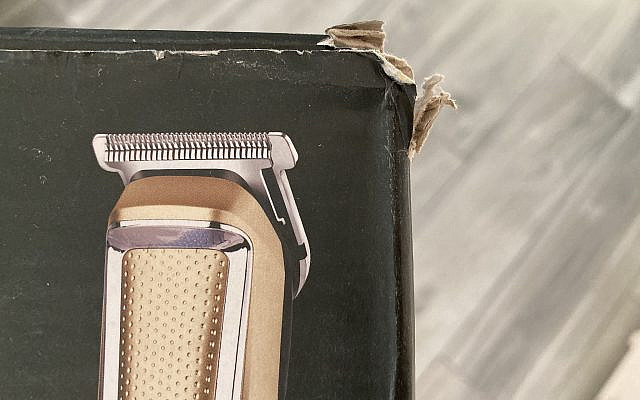 The Geemy GM-6077 in its original packaging. Features highlighted on the box include, "Adopted the design,low noise during operation,very slim,and the baby to sleep" [sic]

I admit it. I bought a beard trimmer from a man in a gas station parking lot.

Also a sun visor for the windshield.

He told me to pull over by him once I finished filling up, that he had a child to feed, that he didn’t see “Jew” or “Arab”, that we were all people at the end of the day, may Allah watch over me.

He got into my car, making himself at home in the passenger seat as he showed me item after item that I didn’t need, and swearing equally to Allah and his mother that he was telling me the truth about how much the items had cost him, how high their quality was and what a great deal he was willing to offer me as a friend.

Many items even came with a one-year warranty!

It had recently occurred to me that I could use a sun visor for the windshield to keep the car a bit cooler when parked in the Mideastern sun. He brought me one from his friend who had an actual, physical store set up next to the gas station.

I told him that all I could really use was this visor.

But it was from his friend, he told me. If I just bought the visor, I wasn’t even helping him and his hungry son at all, may Allah bless me.

Ok, I thought. I had considered getting a beard trimmer lately – one designed specifically for the beard, as opposed to the larger, perfectly functional hair trimmer I generally used for my beard.

There were three. They all looked of dubious quality. The most lavish option included ear and nose hair trimming add-ons. I’m not quite yet of the vintage to need such additions, I thought to myself (though my wife may disagree), and in any event, I was trying to get out of this without spending too much money on stuff I really, truly did not need.

Ultimately I settled on the intermediate option, which looked of significantly better quality than the lowest rung model, yet certainly not as unnecessarily luxurious as the deluxe one. 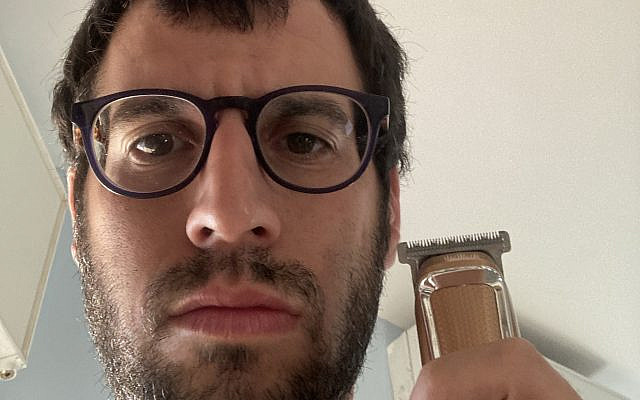 The author with his purchase, the intermediate model 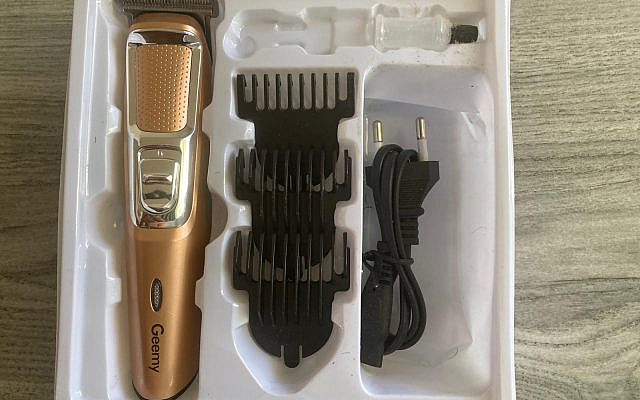 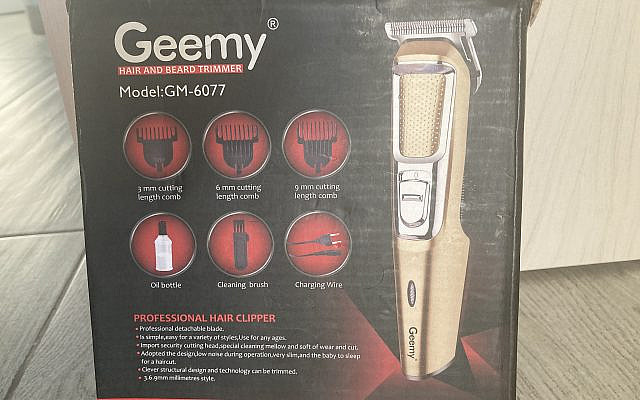 The Geemy GM-6077 boasts a range of features, including “Import security cutting head,special cleaning mellow and soft of wear and cut” [sic] as well as “Adopted the design,low noise during operation,very slim,and the baby to sleep” [sic]. Click image to enlarge and check out the highlighted features!
He was from Hebron, he told me. I assumed his life was hard. Mine isn’t, thank God. I can afford knowingly overpaying a man in a gas station parking lot for a sun visor and a beard trimmer, though I don’t necessarily enjoy doing so.

Moreover, it was the month of Elul, the brief period just before Rosh Hashana when we’re supposed to work extra on improving ourselves. Being extra generous, less judgmental.

Did this count as charity?

Was I buying this crap because I felt guilty?

Would I have interacted and responded differently had the hustler been a Jew?

I had no cash. He dutifully informed me that there were not one, but two ATMs outside the gas station. He came with me as I pulled out money. It pained me (as it always does) to pay the extra fee from an independent ATM such as this one.

I could have lied, pretended I’d forgotten my code. It would have been an awkward, yet ultimately certain “out”.

I got the cash and handed it to him. He took it, putting it in his pocket with barely a “thank you.”

What happened, my friend?

The transaction reminded me of buying scalped tickets outside a sports stadium as a child, yet I enjoyed decidedly less gleeful benefit in this case.

I got back into the car, trying to not feel so jilted, so cheated. After all, I knew I was paying too much, knew that for all his vows to Allah and to his mother, it was pretty clear he wasn’t being truthful with me, his friend.

Another hustler, who actually had a bonafide stand filled with crap I didn’t need, approached my car as I was pulling out. He tried to get in as well. I told him that I’d just bought from his friend and certainly did not need anything else. He looked hurt, betrayed. He didn’t know that friend, but wanted to be mine.

I pulled out of the gas station premises, resenting the smell of the air freshener the first friend had opened and placed next to my seat, an unsolicited gift to sweeten the deal before I’d made the final decision we both knew I would ultimately make. He put a second, unopened air freshener in the glove compartment so that I should have it.

After I got going and finally reached my actual destination, I put the open air freshener in the trunk, its chemical smell having already become bothersome, an unwanted reminder of my friend.

As I unwrapped the deluxe sun visor, which boasted built-in straps to keep it conveniently folded when not in use, one of the straps ripped off upon opening.

I thought to myself: Should I try and exercise the warranty?

That’s not what friends do.

About the Author
Zack Rothbart is a Jerusalem-based writer and publicist. He is currently Senior Strategist at WestRay Communications, and previously served as the National Library of Israel's international spokesman. Zack tries to learn something from everyone, and lives with his endearing and thought-provoking family, for which he is grateful. Feel free to email him via the "Contact Me" link above or follow him on his recently opened Twitter account: @ZackRothbart.
Related Topics
Related Posts