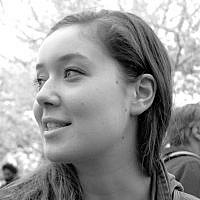 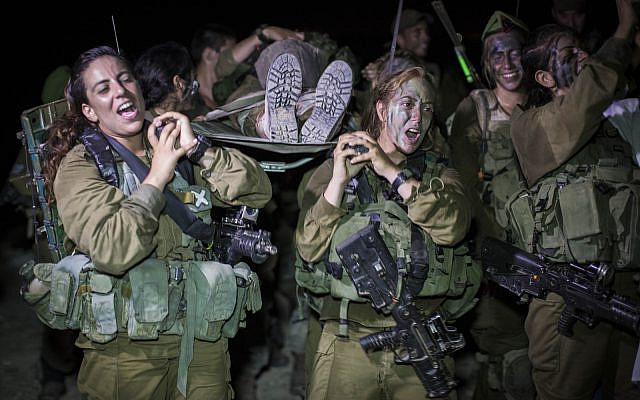 Soldiers of the Caracal Battalion seen cheering while carrying a fellow soldier on a stretcher at the end of their 16 Kilometer journey to complete their training course, in Tel Nitzan, southern Israel, near the border with Egypt, September 3, 2014. (Hadas Parush/Flash90)

Before I drafted, I thought that, when it came to gender equality, the IDF was one of the most progressive militaries in the world. I had seen all of the Instagram posts of Israel’s female combat soldiers rolling around in the mud, and knew that they had women in “light infantry positions.”

This was before the USA opened all military roles to all service members able to pass physical tests; I was smug knowing I would soon be drafting to the IDF.

Only after I drafted to a combat position did I realize my mistake. Israel’s female combat soldiers aren’t really treated as combat soldiers. They are background soldiers, who fill roles that are considered low enough risk to be handled by women.

Female combat soldiers are generally stationed at borders that are considered “peaceful borders” or in areas with relatively little activity. All-male units are sometimes brought in to complete higher risk missions (like arrests of violent offenders) in these areas.

This despite the fact that some of Israel’s women in combat go through the training to attain the highest Rifleman levels in the IDF (the measure of combat infantry skills).

In 2020 this is archaic and foolish. There is no need to sort soldiers by sex when there are already so many tests in place to determine what jobs they are capable of doing.

In a country so focused on security and heavily dependent on her military, many social and political leadership positions require a senior military position as a background. This holds true for many positions outside of the military and security world. Our top decision makers tend to have an impressive military CV — one that it is currently impossible for women to achieve.

One concrete example of our military to leadership pipeline is the team of experts appointed to handle the Corona crisis. This team was appointed by the Malal — Israel’s National Security Council. The Malal is a body with almost exclusively male leadership. Almost all of this male leadership has a CV full of senior roles in the military and security fields.

When it came to picking a task force, they did a terrible job. They picked 29 men and two women. At that, the women selected were research assistants, not experts, and the team was lacking experts on issues of education and welfare – critical fields for handling the impact of Corona. Further, the team had no Arab experts and representation of other minority populations was sorely lacking.

Despite being responsible for putting together a task force to handle one of the most complex and multifaceted crises we have faced, the Malal picked a team that looked like them. Because of the male-centric military pipeline, the Malal is absurdly homogeneous, and they picked a similarly homogenous team, woefully mismatched to the job of handling such a multifaceted problem with such different impacts on different populations.

The less diverse and representative of the population our leaders are, the less capable they will be of leading us effectively.

In Israel, if women are not fully integrated into the military, they will not fully integrate into our country’s leadership roles. They won’t be decision makers and so decisions made about them will be made poorly and without a real understanding of the unique challenges they face.

Men have a long history of being ineffective leaders of women.

We must ask ourselves why we are judging individuals by their genitalia instead of their ability, what that says about our moral integrity, and why we continue to operate this way despite the fact that it is ineffective and damaging.