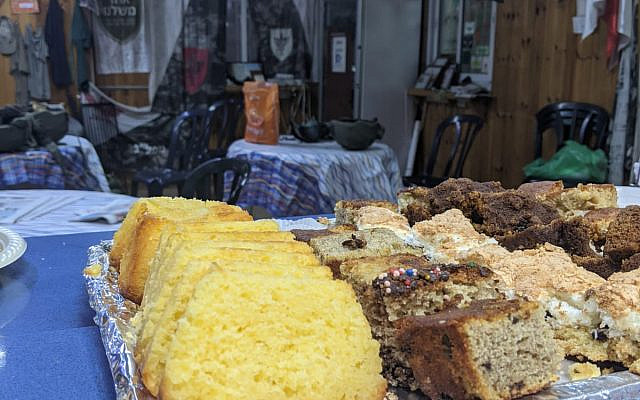 “The grenade isn’t fitting in quite right. Can you help me?”

I was sure, as I looked up from cutting cake, that I must have misheard the two soldiers. Maybe I just had the wrong word for grenade – like the time I went to the beach and asked for a mushroom instead of an umbrella.

But no, there they were, fixing the grenade in the vest.

And thus began my shift at the Pina Chama.

While one soldier was curled up like a little kid on the couch, another was Facetiming his little sister.

Some were hanging out and laughing while others were gathering their gear and running to get to their post.

And everyone, almost everyone, asked for café shachor (Turkish coffee). What is it with this mud coffee? These thick, grainy granules that get them through the night?

I’m still waiting for my tutorial to know how many scoops to put in. And do I fill the cup half way? Three quarters of the way? Full? Do I tap it down, or they do that themselves? Every time I serve another cup, I feel green, uninitiated. Each time, I secretly hope they drink it without thinking ‘Wow that’s gross. Someone has to teach that woman how to make café shachor’.

And they keep coming.

For the first time, one tired soldier came in, looked at the cakes, and gently asked me, “Is there anything else to eat?”

We explored a bit together and found popcorn, which he proceeded to make, and burn to a crisp. We laughed together at the black pieces and the terrible smell. A few minutes later, after trying to salvage some kernels, he sheepishly asked, “Can I make more? Do you mind?”

This time, he calculated exactly how much time he needed to leave it in. Two and a half minutes – no more – and it was perfect. And we both celebrated, as the secular 18-year-old soldier and the middle-aged religious volunteer smiled and shared the popcorn.

On a warm night at the Pina Chama in Gush Etzion.