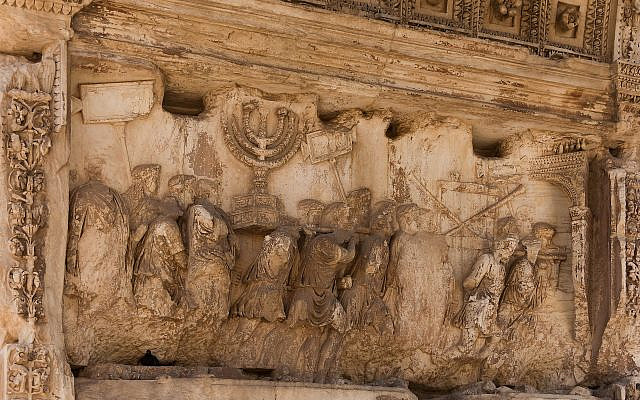 In this week’s Torah portion, Vayakhel, we read about G-d commanding the Children of Israel to build the Tabernacle and all its vessels from gold and copper and other precious materials and stones. Additionally, G-d chose Bezalel and Oholiab from the Israelite tribes of Judah and Dan, and filled them with the inspiration, knowledge, and talent to craft it all. And of course, the Israelites passionately and generously donated all the materials for the Temple construction until it was too much, and Moshe had to tell them to cease the giving.

However, it has been 2,000 years since the destruction of the Second Jewish Temple by the Roman Empire, and subsequently the Church has withheld the return of the holy vessels that was stolen from our Temple in Jerusalem.

I want to beseech the Pope and the Vatican to return the items that they have from the Jewish Temple that rightfully belong to the Jewish people. These items sitting idly in the Vatican vaults and archives hold enormous sanctity to the Jewish people who crafted and worshipped with them over the duration of 1,400 years from the Tabernacle to the First and Second Temples. In the spirit of love and brotherhood between Christians and Jews, and in the name of G-d who commands all mankind not to steal from one another, and to return lost items to their rightful owner, I say to the Pope, it is high time to do the right thing and return our holy Temple vessels to Israel.

Historically, the holy city of Jerusalem was captured, and the second Jewish Temple was destroyed in 70 CE by the Roman Army led by Titus and his father Emperor Vespasian. Later, in the year 81 CE, the Arch of Titus (pictured above) was erected to commemorate Titus’s victory over the Jews and depicts the plunder the Roman Army carried back in their ceremonial march. Clearly carved in the arch are the Temple menorah, trumpets, and the table for the showbread—a sampling of the Temple spoils that the Romans carried off back to their home.

Fast forward and the Vatican was built over Emperor Vespasian’s palace and it is known and accepted by historians and experts that the Vatican archives possess the holy artifacts stolen from the Jewish Temple from 2,000 years ago. While these items may be of historical value to the Vatican, they rightfully belong to Israel from whom they were forcibly taken when the Romans destroyed the Jewish Temple.

For over a millennium, the Jewish people worshipped, sacrificed, and prayed first in the Tabernacle in the dessert on the way from Egypt to Israel and then in the First Temple painstakingly completed by King Solomon in 825 BCE but destroyed by the Babylonians in 422 BCE. Subsequently, the Second Temple was built in 352 BCE and rebuilt ever larger and greater by King Herod in 20 BCE and lasting for 46 years. It was a beautiful and miraculous Jewish Temple where the Jews made their pilgrimage on the Jewish holidays, and they were led in sacrifices and worship by the Priests and in prayer music and song by the Levites. All this came to an abrupt ending with death and destruction by the Romans in 70 CE. Fast forward around 600 years, and the Muslins conquered the Levant, at which time, they built the Haram al-Sharif including the Dome of the Rock and the al-Aqsa Mosque on top of the ruins of the First and Second Jewish Temples.

For 2,000 years, the Jewish people have mourned the destruction of the Temple and the exile from the Holy Land of Israel. With G-d’s grace and according to all the prophecies, the Jewish people were redeemed and returned to the State of Israel in 1948, and then the Jews regained Jerusalem and access to the Western Wall of the Temple Mount (the Kotel) in 1967. Jews in Israel and from around the world come to fervently pray to G-d at this holiest site in Judaism and others residing from around the world continue to turn in prayer in the direction of the holy Temple Mount.

As our sages teach, the Temple is the place literally where Heaven and Earth meet, and G-d’s presence resides there in a concentrated spiritual force for mankind. The ultimate lesson of the Temple is for all people to become holy “human” vessels so that we are individually and collectively worthy to serve G-d with a pure heart and an elevated soul. Knowing that we are on the “doorstep” of Mashiach (messiah), I can only ask that everyone do their part in helping usher in the revelation of G-d to all humankind. In short, the Pope and the Vatican have the tremendous opportunity to do the right thing and return the holy vessels that were plundered from the Jewish Temple, and I am sure that G-d would look most kindly at such a magnanimous gesture of love and brotherhood and that He would bless all his children and the world for it.