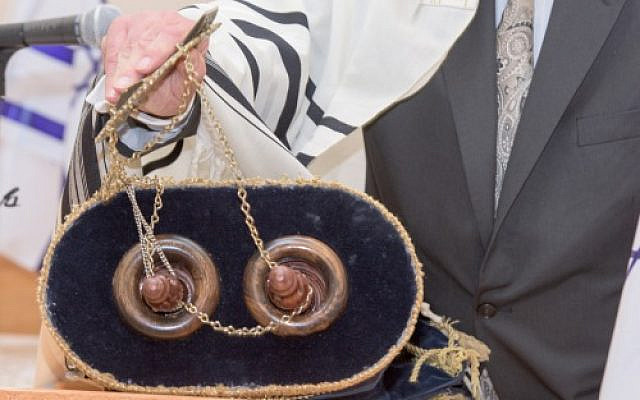 The gabbaim are back working at our shuls again!

In March, when the shuls in our communities were forced to close their doors, the gabbaim unfortunately joined the ranks of the unemployed.

When our shuls reopened in the summer, they still did not have much of a job, as the ba’al koreh was assigned all of the aliyot, along with hagba, gelila, and opening the ark.

But last month, Congregation Agudath Sholom in Stamford built a custom made plexiglass divider to safely separate the ba’al koreh from those given aliyot – and our gabbaim in our community were called back into action.

I’ve always felt that being a gabbai is the Jewish version of the old Rodney Dangerfield joke – they get no respect.  If they organize a perfect service without a hitch, no one gives them a yasher koach.  But God forbid a gabbai accidentally forgets to give someone an aliyah on their yahrzeit week or gives mussaf to an individual who takes a little too long to recite kedusha , and he’ll never hear the end of it.

I’ve never been a gabbai myself, but I have always admired those who take on this important responsibility.  The best gabbaim are the ones who prepare in advance for a service.  They are equivalent to a good choreographer or stage manager.  They’ll know if a leining is particularly long that week, and will compensate by asking someone who leads the service efficiently without too much singing to daven mussaf.  They’ll have a basic idea of who should be getting aliyot before the service even begins, but will be flexible enough to make a change once the Torah is taken out and the attendance at services is final.  They’ll know when there are bar and bat mitzvah celebrations and aufrufs – and what additional aliyot might be necessary.  They will be familiar with the various customs and practices that we follow when it comes to the distribution of honors.  And they’ll make sure that the service flows nicely without any unnecessary interruptions.

Some of the gabbaim I know keep intricate spreadsheets of the names of all members, with their Hebrew name, whether they are a kohen or levi, all of their family’s yahrzeit dates, and their last aliyah – which can be sorted any which way you wish!  While these spreadsheets are impressive, I’m still partial to those gabbaim who use index cards inside an old fashioned file box, and who update their cards by hand –perhaps because this reminds me of my youth, but also because it seems to still get the job done just as well as the elaborate computer printouts.

I strongly prefer shuls where the gabbaim remain at the bima, and don’t go running back and forth through the sanctuary to obtain the names of those who are receiving aliyot.  The most efficient way to accomplish this is to have aliyah cards that are given to those who will be getting an aliyah before the Torah is removed from the ark.  But even without aliyah cards, those receiving kibbudim can be told about which aliyah they are getting beforehand – and if the gabbai does not have the name readily at hand, he can ask him once he arrives at the bima so he can be called up to the Torah properly.

One of my pet peeves is the practice prevalent at many shuls of multiple congregants shouting out corrections to the Torah reading.  Besides being an embarrassment to the ba’al koreh, there are often times where corrections are called out that should not even be made.  There are specific rules as to what needs to be corrected – and it should be the responsibility of one person (the gabbai sheini) to be familiar with those rules, and make any and all corrections to the Torah reading.  I wish more rabbis would insist on adhering to this practice.

Meanwhile, it’s nice to see our gabbaim in Stamford working again.  And to all those gabbaim in other communities who are back at the bima … thank you for making sure our services run as smoothly as they do.   God willing, once the COVID-19 vaccine has been distributed widely, our shuls will be filled with congregants again – and our gabbaim will be faced with the usual challenges of deciding who should get maftir and daven mussaf.