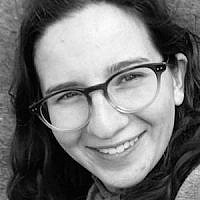 The Blogs
Jenna Kershenbaum
Apply for a Blog
Advertisement
Please note that the posts on The Blogs are contributed by third parties. The opinions, facts and any media content in them are presented solely by the authors, and neither The Times of Israel nor its partners assume any responsibility for them. Please contact us in case of abuse. In case of abuse,
Report this post.

The date was Thursday, October 6th 2014, the 22nd day of Tishrei 5775.  Shmini Atzeret was upon us, and I found myself talking with some friends in our dorm lounge.  It was around 2 o’clock in the afternoon when I realized I had a class in a few hours just across campus.  “Should I go?” I thought to myself as I quickly weighed in on my limited options. I had skipped all of my classes that fell out over Yom Tov thus far and seemed to be getting along just fine with my workload. I mulled it over again. Walking there would not be an issue, and neither would be getting into the hall, which was opened by non-automatic doors (also known as doors).  I would not take notes, as the lecture slides would be posted online after the lesson. The weird thing was that I knew that no one would stop me.  Perhaps it wouldn’t be the worst thing.  Then again…

It had only been a few weeks since Judgement Day, Rosh HaShana, not to be confused with the second movie of the Terminator franchise. In many Jewish communities, the climax of the Rosh HaShana service is the prayer of Unetaneh Tokef, widely translated as “Let us speak of the awesomeness of this day….” (In others, it is Aleinu at the end of Mussaf, but that’s another story for another time.) When we think of the line in this famous piyut which reads “who will live in harmony and who will be harried,” many of us think of people whose lives are interrupted by forces beyond their control, be it warfare, illness, or natural disaster. On a much, much smaller scale, people can also be very much harried by their thoughts. As someone who would define themselves as pretty observant, I was surprised to fall into this category. After being brought up in a religious environment, attending yeshiva day school through high school, and spending a year to learn in Israel, how could I even think of going to class on Yom Tov? I was appalled at myself for even thinking of going to a lecture on a day designated by G-d Himself as a holiday. It was almost as if a tiny Jewish bubbie appeared on my shoulder and proceeded to reprimand me for my thoughts while waving a disparaging finger at me.

The entire ordeal (which, I cannot stress enough, was only happening entirely in my head), left a mark on me.  I had been told time and again that compromise is a very dangerous thing with regards to religion, and there I was, clad in my standard black pencil skirt with an elbow-length  shirt thinking about going to class on Yom Tov. It wasn’t that I was worried about doing anything inherently muktzah; it was that I was aware that I could get away with desecrating the sanctity of the day and no one would bat an eye. All it boiled down to was the simple question of whether I truly wanted a Yom Tov or just a regular yom.

One of the greatest pieces of advice that I have been fortunate to receive was the following one-liner from my high school Spanish teacher: “When in doubt, don’t.” Just before retiring from teaching in my school for over 30 (!!) years, she left her students with this simple yet effective message, and I have come back to it time and again during my years in college.  When I think back to that fateful Thursday afternoon in the lounge I undoubtedly remember her words and keep them as a constant reminder of what could have been.

If I would have gone to that class, then what has this all been about?

Alright, so had I gone to class, what is really the worst that could have happened?  Perhaps I would now have a better understanding of what exactly the difference between CPU and RAM memory is, but I was never going to get an A in Computer Science, no matter how many classes I attended or did not attend.  The issue at hand is the danger of compromise when one finds themselves in an unfamiliar setting with no one to tell you what to do when something like this comes up.  It is easy (almost too easy) to compromise one’s ideas and beliefs that were thought to be firmly implanted in one’s memory when in a university setting.  There are a lot of people, a lot of places, and certainly a lot of opinions.

For those of you about to face the same dilemma, I leave you with these parting words: When in doubt, don’t.

About the Author
Standing at an imposing 5’1”, Jenna Kershenbaum justs wants to make Aliyah already. After attending Frisch High School and then Midreshet HaRova in Jerusalem, she currently studies at Rutgers University in New Brunswick, NJ, pursuing a double-major in History and Jewish Studies. When she isn't getting annoyed at Napoleon for trying to conquer Russia in the winter, Jenna can probably be found shoving pictures of her dog in people's faces or daydreaming about eating laffa with extra techina in the Old City.
Related Topics
Related Posts
Jenna Kershenbaum
Comments