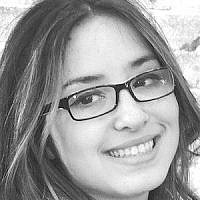 The Blogs
Samantha Khavin
Apply for a Blog
Advertisement
Please note that the posts on The Blogs are contributed by third parties. The opinions, facts and any media content in them are presented solely by the authors, and neither The Times of Israel nor its partners assume any responsibility for them. Please contact us in case of abuse. In case of abuse,
Report this post.

As though it was yesterday, I remember being a high school student – bright eyed, fresh faced and hopelessly naïve. I had been sucked into a pro-Israeli vacuum. My parents were Soviet Union immigrants who were so utterly passionate about the Judaism and Zionism they had been forced to supress for decades that they chose to send me to a Modern Orthodox school, with Zionism firmly enshrined within its ethos. We would pray facing Jerusalem every day, delighted in learning all about the Jewish holidays and proudly displayed an Israeli flag alongside our Australian one on our school flagpoles. I knew, of course, that anti-Semitism existed, but I was under the impression that it was the twisted ideology of an ignorant sycophant here or there.

How very wrong I was.

I remember word-for-word a conversation that I had with my father who told me that once I left high school, things would be very different. He warned me that I would constantly be surrounded by people who, by virtue of knowing that I am Jewish, would consistently question any achievement or accolade I may acquire, or even try to delegitimise my right to exist.

Needless to say, as much as I loved and respected my father, I dismissed his warnings as the yammerings of a middle-aged-man whose time to cast judgement and throw stones had passed.

On my very first day at university, I eagerly joined the Australasian Union of Jewish Students (AUJS). This organisation is a superb voice for Jewish students and a means of accommodating their cultural, social, religious and political needs.

Before the euphoria of meeting new Jewish people on campus could even wear off, I received a phone call from a friend, shocked and upset. Members of the Socialist Alternative had spotted him at an AUJS stall, ambushed him and demanded to know why he had chosen to join a Zionist organisation, as all Zionists did was maim and kill and rip and tear the fabric of this fragile universe apart. This person still attends AUJS events nowadays, the altercation all but forgotten. But I have not forgotten.

In my capacity as the Regional Vice President of AUJS’ chapter in New South Wales, a very large part of my role is assisting our various affiliated campuses and helping them to ensure that the social and political climate of each campus is safe and enjoyable. This job is an absolute pleasure most of the time, but it is a lot more difficult than it sounds.

This year I have had the rare opportunity to cast my eye over the academic environment as it exists for Jewish people today and am able to compare the nature of anti-Zionism on various campuses. Though some campuses consistently remain politically apathetic, there are a number that are considered hot-spots for anti-Semitism. In fact, the university that I wanted to go to for nearly my entire academic career became a university that I am increasingly relieved I did not choose, given the propensity of anti-Semitic incidents to occur there week-to-week.

I work with campuses in Sydney on a very personal level and incidents are reported to me constantly. Belligerent Socialist Alternative members occupy the university’s main walkway handing out pamphlets and soliciting signatures for their petitions – some of which are for very worthy causes – but which all too often call for the demonization and delegitimisation of Israel.

Another group, Students for Justice in Palestine, exists to draw attention to the plight of the Palestinian people – a cause that I would support if they were not advocates for the Boycott, Divestment and Sanctions movement and did not call for the extermination of any pro-Zionist sentiment on campus.

In this day and age, I have found that the general feeling on many university campuses in Australia is that if you are a Zionist, you must be punished.

Since before I entered the university scene in 2014, the Australian Jewish community has seen this anti-Zionist sentiment as ordinary campus behaviour. In my first year of university, tensions between Israel and Gaza escalated to what is now known as Operation Protective Edge. During this time, anti-Zionist rhetoric on university campuses erupted and every Jewish university student stepped onto campus with bated breath. My own university had a large banner outside our library with a derogatory drawing of an Israeli Defence Force soldier with the caption “Israel is a terrorist state” painted on it in giant, imposing red letters.

We are also used to our lectures being hijacked – with a talk from prolific Israeli historian and journalist, Yoaz Hendel, being violently disrupted in 2014; and more widely known, a speech from Colonel Richard Kemp on Ethical Dilemmas of Military Tactics being stormed by pro-Palestinian protestors, including an academic. This most recent incident caused significant distress to all who attended and frustratingly resulted in no penalty for perpetrators of both physical violence and hate-speech.

Our efforts to liaise with the Student Representative Council have occasionally been fruitful and we have allies on both the Left and the Right in student politics who are sometimes willing to advocate for us. The truth, though, is that even Jewish students who are involved in student politics have the secret, nagging, paranoid fear of even our staunchest allies one day changing their minds and mobilising against us.

Israel is by no means a flawless state. However, what university students need to learn, what we need to teach them, is that no state is perfect and that holding Israel to impossible standards is only going to yield disappointing results. Even more frustratingly, these young idealists who are to be the leaders of our generation do not push these same standards onto countries such as Rwanda and Sudan and North Korea, in which very real atrocities are occurring. Not so much as a cursory glance is given to these places, whilst all eyes are on Israel – a country which is attempting to thrive in a world where it is constantly called to justify its right to exist.

University campuses are becoming one of the main battlefields for Zionists all over the world. And Jewish people, as People of the Book, will naturally be drawn to these places. But we are constantly being made to feel like outsiders. Only recently I was told the story of a student my age who entered university choosing to wear tzitzit. As a consequence, he was shouted down, the worlds “Heil Hitler” ringing in his ears as he attempted to find his way to class amongst buildings that were once grand but now imposing. Such things are far from acceptable and should not have to be the norm.

It is time that we stop apologising for being Zionists on campus. We ought to believe that we deserve respect. We have a right to expect to engage with others in an atmosphere that is conducive to open dialogue, without fear of being shouted down. It’s really that simple. Some Jewish students may not be interested in Israel or politics, and that’s fine. However, if they are interested, they deserve the right to be treated with exactly the same respect that is afforded to any other student and deserve to have their views out there in the open without retribution.

I want to come out of university with a degree – not bruises. We must continue to strategise about how to educate and engage with fellow university students who don’t necessarily know both sides and help those with an open mind to reach a balanced decision. And, more than anything, we need to empower Jewish students – to embolden Zionist students – to look any delegitemiser directly in the eyes and demand their respect.

Is that really too much to ask?

About the Author
Samantha Khavin is the Public Engagement Officer of the Executive Council of Australian Jewry, with a professional background in counterterrorism, politics and interfaith.
Related Topics
Related Posts
Samantha Khavin
Comments