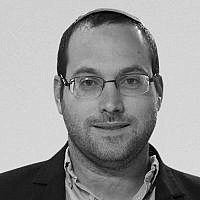 The Blogs
Ariel Finkelstein
Apply for a Blog
Advertisement
Please note that the posts on The Blogs are contributed by third parties. The opinions, facts and any media content in them are presented solely by the authors, and neither The Times of Israel nor its partners assume any responsibility for them. Please contact us in case of abuse. In case of abuse,
Report this post.

Despite its relatively quiet reception, the recent decision to set up an inter-ministry committee to expand the powers of local authorities and reduce their regulation by the central government, may well be one of the most important steps taken by the current government. According to the decision, the committee will identify and recommend the powers which can be delegated to the local government. It will also define indicators and criteria for determining the extent of the decentralization, and propose ways to reduce the regulatory burden between the various ministries and local authorities. This would constitute an overall revolution in the structure of the Israeli system and would have broad implications for Israeli democracy and the quality of the services provided to citizens.

There is no doubt that the centralized structure of Israeli governance weakens the status of local government. According to the World Bank’s local government decentralization index, Israel ranks 94 out of 182 countries; within the OECD it “won” the title of the least decentralized state. The weakness of local government is manifested first and foremost on the fiscal level: proportionally speaking, local authority budgets in Israel are half the OECD mean; local authorities have almost no control over their taxation rates, with 95.1 percent being determined by the central government (the OECD average is only 7.8%).

The World Bank researchers found, in addition, that when it comes to local governments’ autonomy with regard to manpower — hiring, setting salaries, and firing without intervention by the central government — Israel ranks at the bottom of the list. Centralization is most prominent in the very limited powers accorded to local government. Various studies and indexes have pointed to the extreme centralization of education, transportation, planning and construction in Israel. For example, the OECD cites five models of education systems found in its member countries, and assigns Israel to the most centralized group, because so few decisions are taken jointly with local authorities and school administrations.

These statistics are totally incompatible with the attitudes of Israelis. In a survey conducted by the Israel Democracy Institute in November 2020, 71% of the respondents supported devolving the powers of government ministries to local authorities; only 15% were opposed. The IDI’s Democracy Index for 2020 found that local authorities are the public entity that enjoys the highest level of public trust (except for the Israel Defense Forces) — far ahead of all central government institutions.

Though recent years have seen a decline in trust in almost all public bodies, there has been a gradual increase in trust of local government — a trend which has accelerated since the outbreak of the COVID-19 pandemic. If anyone still needed proof of the local authorities’ inherent advantages, the way they dealt with the coronavirus provided the best evidence possible. These insights are clearly reflected in the state controller’s comprehensive report, published in September, on the government’s management of the crisis. In the chapter on “utilizing the capacities of local authorities,” he noted that the State had not made intelligent use of their intrinsic advantages.

For many years, government officials have been spouting the need to delegate more power to local government, but very little has been done in that direction. The gap between the bombastic statements about decentralization and the persistence of the centralization policy is not the result of bureaucratic resistance to reforms but rather the ministers’ reluctance to give up some of their control and authority. Their upper hand over local governments provides them with one of their most important power bases; and nothing is harder for politicians than relinquishing power. The government’s formal decision on the delegation of more power to local authorities is a welcome development, and certainly not to be taken for granted. We can only hope that it will lead to concrete steps in this direction, and not remain solely on paper.

About the Author
Ariel Finkelstein is a researcher at the Israel Democracy Institute.
Related Topics
Related Posts
Comments