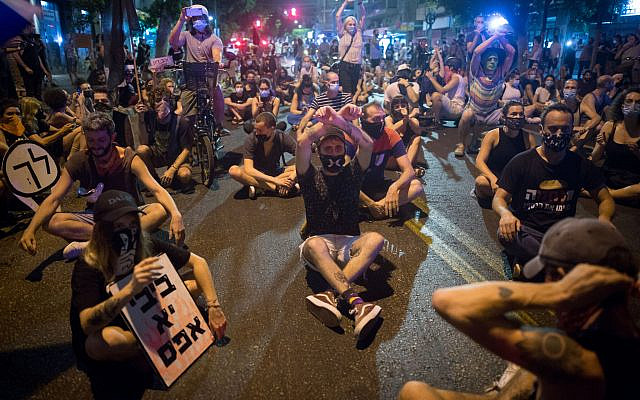 Protesters block a road as they protest against Prime Minister Benjamin Netanyahu in Tel Aviv on September 30, 2020. (Miriam Alster/Flash90)

It is unclear what is spreading faster in Israel today: COVID-19 or resistance to government approaches to containing the pandemic. What is incontestable is the government’s abject failure in anticipating and managing the second wave of the coronavirus and its debilitating socioeconomic ramifications. Its poor performance has evoked widespread protests throughout the country among highly divergent social groups, with public demonstrations in over 350 separate locations recorded during this past weekend alone.

What is the significance of these protests? Do they provide the basis for constructive change? Under what circumstances? The answer is a qualified yes, but only if they are conducted strategically and followed up prudently after the initial wave subsides. Substantial historical and comparative research provides important insights on how resistance can bring about much more democratic and equitable transformation in the future. Precisely at this juncture, Israelis might do well to internalize some of these lessons.

Israel’s record with handling the coronavirus crisis has been uneven. Its swift initial response to the onset of the medical emergency was relatively successful, but after it emerged abruptly from this phase in late April, it procrastinated for far too long in putting in place the most elementary measures needed to keep the virus at bay: broad testing, careful tracking of infections, and rapid quarantines of vulnerable populations. In the process it has squandered precious economic resources — further deepening the human price of the pandemic — ignored critical scientific advice, and experienced a critical loss in legitimacy.

Over the summer, the situation took a further negative turn. The Netanyahu-led government began to exhibit some of the key maladies associated with autocratic-leaning regimes during the pandemic (as detailed by Thomas Carothers in David Wong in “Authoritarian Weaknesses and the Pandemic”): (1) a tendency for feeble and erratic decision-making — rife with inconsistencies, conspiracy theories and diversions; (2) outright hostility towards critical voices and civil society; (3) inflexibility in delegating tasks to various agencies and local authorities; and (4) a further loss in public trust. When last month’s virus figures began to spike, public support of the ruling coalition plummeted accordingly.

Throughout this period, although discontent has been rife, dissent has focused around two major, and quite contradictory, poles: certain groups among the ultra-Orthodox who do not oppose the government, but seek to benefit from its resources, and, increasingly, civil forces concerned with the official chipping away at Israel’s democratic foundations and with the deterioration of socioeconomic conditions. Since the government has been reluctant to limit the Haredi resistance so crucial to its political survival — especially during this Jewish holiday season — it has focused on curbing the growing protests centered around the Prime Minister’s Residence on Balfour Street in Jerusalem. Last week, it passed special legislation to prohibit these gatherings, limiting protests to contained, close to home rallies far away from the traditional symbolic meeting place of government opponents.

If these measures were intended to curb anti-government demonstrations, they have had exactly the opposite effect. This weekend, tens of thousands of people (totaling, according to the various organizers, over 130,000) gathered outside their homes, at street corners, bridges, parks, playgrounds and, yes, in city squares. Many protested for the first time — either because they could not or would not join the Jerusalem gatherings, or because they had lost the last shred of trust in their leaders. While most of the protests were peaceful, clashes were recorded between demonstrators and the police, and several protesters were assaulted by right-wing opponents (who themselves have not rallied in support of the government in sizable numbers for months). At the time of writing, the government is fast losing control.

Does this mean that the protests are having an impact? Are they succeeding in achieving any real change? While they have had a palpably unsettling effect on the government, it is still too early to draw any clear conclusions. It is possible to point to some factors (mostly with the help of Erica Chenoweth and Maria Stephan’s pathbreaking work, Why Civil Resistance Works: The Strategic Logic of Nonviolent Conflict) that could substantially increase their influence. All involve a long-term strategy and an ability to convince different groups to join in its implementation.

First, nonviolent civil resistance is far more effective in producing change than violent forms. Indeed, analysis of a data set of 323 mass actions over the past century showed that nonviolent campaigns have been 10 times more likely to yield more democratic results than their violent counterparts. The advantages are clear: nonviolence allows participants to claim the moral high ground. It makes it easier to mobilize activists and sympathizers. It is also more sustainable over time. There are, however, some obvious disadvantages: it invites violent responses from the authorities, it can be abused, and it may nurture a disjuncture between local initiatives and national concerns. Nevertheless, averting violent clashes is a major key to effectiveness. Abiding by this lesson, however difficult, is especially critical given the clashes of the past few days.

Second, as a joint study by Harvard and Stockholm University economists shows, the size of the protests is much less important than the commitment they engender. Protests get people politically activated. And the more people that are mobilized, the more politically influential they become. Populists and religious extremists have built upon this insight for years. Democrats can do the same. Indeed, Erica Chenoweth has shown that it takes only 3.5 percent of the population to guarantee a successful campaign. In Israel, this comes to just under 300,000 protesters.

Third, ongoing participation of diverse groups is exceptionally important. In Israel, the current anti-government demonstrations began with the corruption investigations against Benjamin Netanyahu, but since the beginning of this year they have morphed into a broader expression of disaffection with the current situation. The sociological profile of those involved has also diversified — although not as much as many would like. The greater the heterogeneity of participants, the better the prospects for achieving the immediate goal that binds them together: the ouster of the present government and its leader.

Fourth, protest movements have to develop the ability to gain the support of critical groups, such as the police or security forces, as well as economic elites or opinion shapers. These mainstays of the existing order, if they can be dislodged from full support of the power structure, can have a critical effect on outcomes. In Israel, intriguingly, many former heads of the defense establishment are central figures in the protest movement. Economic leaders and those middle classes previously supportive of the government are beginning to shift their position. But the standoff between the police and the protesters has only grown in recent days. Here, much more studied interventions are needed.

Fifth, nonviolence resistance consists not only of protests, but of a variety of tactics — ranging from small expressions of dissatisfaction (such as turning off lights at given hours, singing from porches, avoiding certain broadcasts) to periodic sit-downs or organized strikes. Sole reliance on demonstrations is a prescription for failure, especially if these devolve into violence. Generating a list of specific tactics also serves to keep people involved even when overt protests are circumscribed.

Sixth, however difficult, it is necessary to avoid a deterioration of protests into either violence or chaos, especially when faced by growing repression. Here social networks — along with perseverance (the cases of Gandhi, Martin Luther King and key elements of the anti-apartheid movement are notable examples) — can play an important role. The logic behind such forbearance is undeniable: it prevents these movements from slipping into modes of behavior that characterize those they are trying to unseat and allows them to play according to their own rules. In Israel, particular attention has to be given now to avert the violence trap.

These comparative takeaways highlight the long-term quality of successful mass protest. Even if the immediate goal of replacing the current leader is achieved, this is merely the first stage in effective political change. After the protests die down, the momentum they generate must be nurtured by other means. As the over half a million Israelis who participated in the social protests of 2011 know well, the risks of co-optation, passivity, or non-political action can easily erase past achievements. Today’s activists must keep this next phase in mind as they continue to press for a functioning, egalitarian and more truly inclusive Israel.