The Blogs
Robert Lakin
Apply for a Blog
Please note that the posts on The Blogs are contributed by third parties. The opinions, facts and any media content in them are presented solely by the authors, and neither The Times of Israel nor its partners assume any responsibility for them. Please contact us in case of abuse. In case of abuse,
Report this post. 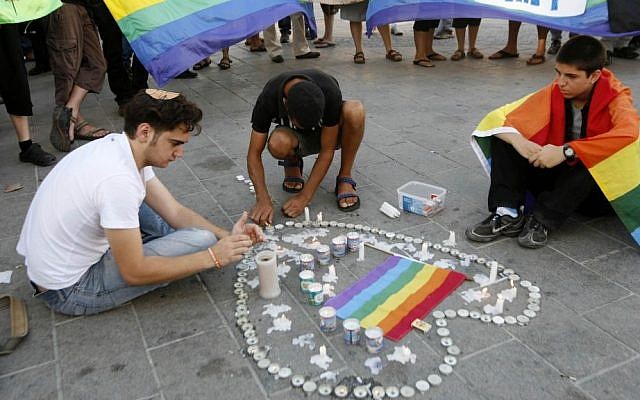 A memorial in Jerusalem for the victims the August 2009 shooting attack at a gay youth center in Tel Aviv, on August 2, 2009. (photo credit: Miriam Alster/Flash90)

By most measures, the just-ended Tel Aviv Pride Week was a resounding success. Estimates put more than 100,000 revelers at the parade last Friday. International news outlets reported — without any hint of irony — that it was the largest event of its kind in the region.

But when the music ended and the dancing stopped, there were still a group of LGBT kids living in a shelter in South Tel Aviv because they are not welcome in their own homes. They’re living at Beit Dror, a temporary shelter providing basic home conditions for teens (male or female) who have been rejected by their families and alienated because of their sexual orientation. The shelter faces funding challenges just like any amutah here in the Start-Up Nation.

Which led me to wonder: What would happen if we began thinking about solving these social funding challenges with the same logic and language that we use for startups?

If the Chief Scientist’s Office were funding it or if foreign VC’s could put a valuation on Beit Dror’s services, you’d probably have already heard of it.

“Dror provides immediate shelter and basic home conditions for homeless at-risk LGBT adolescents who need to be immediately leave family surroundings, due to past or possible future physical or mental abuse.”  (Admittedly, it needs some polishing to get to 25-words-or-less.)

If they had a pitchdeck, the page reserved for answering the always-critical question — “What Opportunity Are You Addressing?” — would describe that 40% of homeless youth identify as LGBT.

In a country that likes to think of its firsts in terms of technologies, start-ups and exits, Dror is also a first of sorts, as the first and only center designed to meet the needs of out-of-home LGBT adolescents in Israel, and one of the few similar institutions in the world operated by governmental organizations.

What’s the partnership strategy? Beit Dror nailed that early on as the result of a collaboration between the Ministry of Labor and Welfare’s Hassut HaNo’ar authority and the Tel-Aviv-Jaffa municipality’s Shahal program.

How does it scale? One channel is to develop an information center on treating LGBT youth. Another is to develop and expand out-of-home placement solutions and fostering services, as well as planning additional future support systems for homeless LGBT teens.

Is there a data element to the business? Longer term, the organization wants to collect data to increase public knowledge and awareness on the various needs and characteristics of LGBT at-risk youth.

Is it a candidate for crowdfunding? Yes, pure and simple. In this seed round, Beit Dror is seeking to raise a bit more than NIS 200,000. By local start-up standards, it’s a decent raise. But the equity that investors get for their investment is immeasurable.