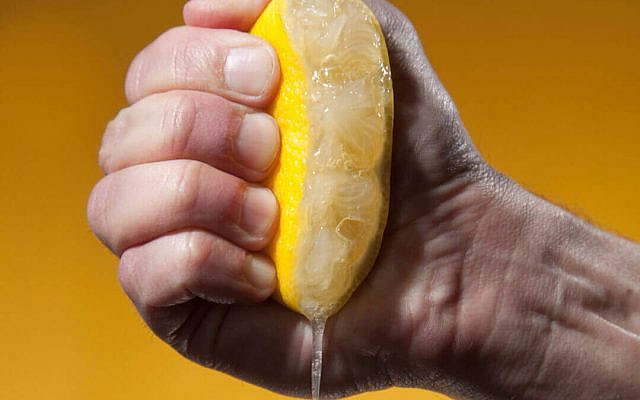 Can We Make Lemonade from This Lemon?

We live in the age of one-liners, where self-help gurus, the media and politicians would love to dismiss our concerns with a witty quote such as: “When life gives you lemons, make lemonade.” Or they may use the banal adage: “Never forget, within every obstacle is an opportunity to improve our condition.” These truisms put the onus on us rather than on our problems. I wouldn’t tell Carolyn Vigil, from West Virginia, to make lemonade of her lemons as she was pleading for her husband to be tested for the Covid-19 infection for almost a week, while at the same time the governor was boasting that there were no infections in his state. I wouldn’t blame her if she failed to appreciate your platitude.

But, truth be told, “Where there is smoke – there is fire,” to use another quote, and I accept that some of these truisms make sense. Personally, having lost family members in the holocaust, I am partial to Viktor Frankl, who survived the concentration camps to teach us about resilience and the human condition. My favorite of his wise sayings is: “When we are no longer able to change a situation, we are challenged to change ourselves.”

Better than anything else, this describes our condition in this world-disrupting crisis. Yet, being aware of our predicament, including some of the existential threats we’ve brought onto ourselves, I am not sure what frightens me more: that life, as we know it, might change forever, or that we’ll resume our old materialistic behavior once we’re clear of the virus and return to our aggressive capitalism way of life.

Don’t get me wrong; I am no socialist. My family endured horrendous conditions while struggling for over a decade to leave the Soviet Bloc. I am aware that the socialist experiment has failed across the majority of the world, but I am also aware that we lost our way, in every sense of responsible living. We’re heading over the cliff, by selling off our children’s future to acquire more sneakers, cars, jewelry, Prime memberships or whatever is on our must-have list.

The world we’ve left behind in the past couple of months, is one of constant conflict where politicians are trapped between a rock and a hard place. On the one hand –  in understanding the environmental, immigration and populist world crisis threatening our future – while on the other hand they’re aware that pressure of employment and lifestyle, as expressed by the ever-looming stock-market levels, make it impossible for them to enact the very steps necessary for solving these problems.

But I am not a critic. I wouldn’t bother sharing my thoughts, if I didn’t have something up my sleeve. Even if it’s only half-baked, I have more faith in my suggestion rather than the way our leadership is going to handle the next step.

Let’s assume that, in our struggle against this virus, we have a very long way to go, maybe a year or more, exacting a terrible fate on our fast deteriorating economy. Things will not get better even after we have spent the $2 trillion in handouts the Senate had just approved. Let’s presume that unemployment will reach depression-era figures of 25%, and let’s accept that there is no silver bullet to help us avoid the pain we’re facing. What then?

Fortunately, we can learn from history, where its most applicable parallel is the Great Depression our grandparents lived through almost a century ago. After trying all the economic levers available to him, to no avail, FDR created the New Deal, which was a series of work-relief programs, in which the Works Progress Administration (WPA) created public work projects. Desperate, unemployed workers were guaranteed pay for work and over eight-and-a-half million unemployed workers, 25% of the American workforce, took advantage of the program for over a decade, as the economy struggled to come out of the worst global recession in modern times.

For an average salary of $41.57 a month, WPA employees constructed bridges, roads, public buildings, parks and airports. The work-relief program lasted for over a decade and was more expensive than direct relief payments would have, but worth the added cost. Harry Hopkins, who supervised the program, said: “Give a man a dole and you save his body and destroy his spirit. Give him a job and pay him an assured wage and you save both body and spirit.”

We all know that much of our infrastructure is in disrepair. Our president made it his prime goal, when taking office, in his own words: “We are going to fix our inner cities and rebuild our highways, bridges, tunnels, airports, schools, hospitals. We’re going to rebuild our infrastructure – which will become, by the way, second to none. And we will put millions of our people to work as we rebuild it.”

Following the news over the past few years, we could learn that bridges are in poor condition, some have collapsed, killing passengers trapped in their cars. Throughout the country, water and sewer improvement projects are delayed, subjecting communities to poisonous consequences, (remember Flint?) and our public schools are in worse conditions than those in many third world countries. The list goes on, and it doesn’t matter how we got here, but maybe, just maybe, if we use some version of FDR’s successful work-relief program model, and yes! We must update to our times. If we do so – we may help both our country and its citizens, at this challenging time. We could advance our infrastructure as the new driver of our economic relief, rather than returning to the almost 70% reliance on consumer consumption as the main engine for the world economy. Let’s limit the assault on precious resources which and destroy the environment, to the point of no return. We owe it to our children to try and do better. Many people argue that we need to learn something from this crisis. Let’s go back to a unified world, where we take pride in our accomplishments both as human beings and Americans.

I know; the Devil is in the details, and I don’t have all the answers. But this might be the new direction our society should take, leading the entire world with us.

Let us use this crisis to help us build a better world – for If we don’t – we may lose it forever. If not in this pandemic, then in the next existential threat looming on the horizon.

To conclude; Victor Frankl, my family and many others didn’t survive just to have us destroy the world around us. The first step in fixing our problems is to acknowledge them. If we do so, we may make lemonade out of these lemons after all!