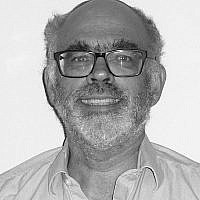 The Blogs
Dov Green
Apply for a Blog
Advertisement
Please note that the posts on The Blogs are contributed by third parties. The opinions, facts and any media content in them are presented solely by the authors, and neither The Times of Israel nor its partners assume any responsibility for them. Please contact us in case of abuse. In case of abuse,
Report this post.

Last week Yediot Acharonot ran a story about a Satmar community that is burgeoning on an island at the mouth of the Thames River. The area was economically depressed, real estate was dirt cheap, and the Satmar community of North London, which was bursting at its seams, found this as a venue in which to expand. The indigenous population, described as Anglicans and agnostics, was understandably concerned about the fabric of their community, but some of their members pushed and cajoled, and described how wonderful it would be to have these God-fearing people living in their midst.

The story seemed familiar, so I dug around in my library and found a copy of Pottsville: A Clash of Cultures in Heartland America, by Stephen Bloom. The book was written back in 2000 before Pottsville and its kosher abattoir became infamous because of the raids by federal agents, and the conviction of its owner for violation of immigration, labor and environmental laws.  The story is about the tensions between the German Lutherans and the haredi Jews who were imported to work in the slaughterhouse. It was told by a professor of journalism at the University of Iowa, a non-observant Jew originally from New York, who hankered for some Jewish soul food. When the mismatched expectations – the Lubavitchers viewed him as a potential ba’al teshuva – led to a falling out, Bloom’s journalistic instincts led him to stick around and investigate the tensions and the inevitable denouement.

Some of the sources of friction were inevitable. Instead of striving for neighborly relations, the haredi Jews seemed to violate all the standards of behavior, in a small town, in the Midwest, in the 1990s. A local might greet his new neighbor in the street, but the latter would walk by him as if he were air. Without getting into the specifics, although some of the scenes described are at the same time cringe-worthy and humorous. The pride that the locals took in maintaining their lawns and their cars were completely ignored by the Jewish population. The penchant for besting someone in a business deal, plainly put cut-throat business practices, ran afoul of the conventions and offended the sense of good neighborliness.

Getting back to Canvey Island, someone should have distributed copies of this book to the members of the city council. This not having happened, I would venture the following predictions:

And what does this have to do with Jerusalem? Last week some friends of mine (he is 88, she is 86) were coming back to Jerusalem by bus. They, along with thousands of other people, were stuck in one spot for over an hour and a half while haredim closed the entrance to the city in what amounts to an internal haredi power struggle. If a sovereign Jewish state cannot figure out its relationship with its haredi community, what can we expect of the poor goyim?