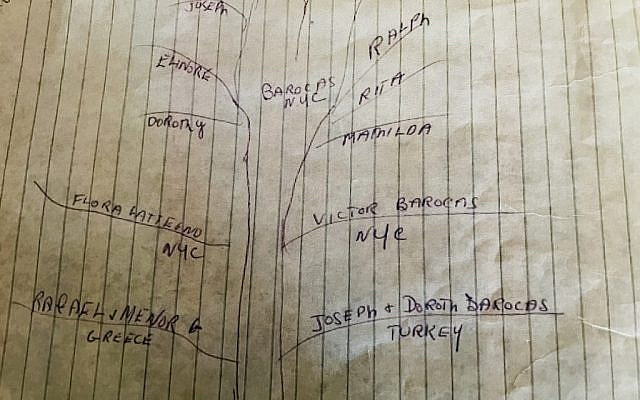 What are the stories we carry with us?

As a little girl, I lived two floors below my grandma’s apartment. I recall her sitting by the window, blue curls of smoke rising from the red tip of her cigarette and entrancing my older sister and me with stories in her jumble of the ancient Ladino she grew up with, the French she learned in school, and the smattering of English and other languages she picked up along the way. It was the sound of her voice I remember, the exotic mix of vowels and consonants that evoked faraway places and people long gone.

Much of her family had been rounded up and deported by the Nazis from the bustling Greek city of Salonika to death in Auschwitz. Only remnants survived, including my grandma.

She had been one of the lucky ones to leave Salonika as life for Jews in the port city worsened in the early years of the 20th century. She departed in 1915 as a young woman, educated, the daughter of a rabbi, traveling with her Tia Raina and Uncle Aron to New York City. She left behind her parents and four younger siblings and who knows how many of their extended family. She never saw them again.

She soon met and married my grandpa and had six children, my mother, the eldest, named for her beloved mother.

And so, her story is mine.

Last year I read Sarah Abrevaya Stein’s Family Papers, a poignant history of another Sephardic family from Salonika, meticulously pieced together from a trove of letters spanning four generations, nine countries and three continents. The letters and other documents, written in eight languages, tell of the sprawling Levy family as they left Greece to seek opportunity or refuge. The heart-wrenching final chapters of the book recount how far too many of them perished in the Shoah.

And I began to think about the stories I had heard, and those that had never been told.

I recalled a letter my mother had written to one of my daughters on her bat mitzvah so many years ago. I shuffled through her papers and pulled it out from among those things she had left behind.

I sat at my desk on a recent morning and reread the three handwritten sheets, my mother’s voice as clear as her writing. In simple language, she recounted the family history and its tragic end.

“We believe that they all perished in the gas chambers,” she wrote.

She recalls her mother’s yearning as she grew older, and the world heard of the unknowable (Daniel Mendelsohn’s achingly apt word from his memoir Lost, A Search for Six of the Six Million) horrors of the Holocaust, to find out what happened.

Despite her efforts to learn more, her dogged research, her travels to Salonika, to Yad Vashem, she could not verify a record of their ending.

And so the story ends, and so it begins again.

Along with the letter my mother left behind was a hastily scribbled family tree, with names of her grandparents, her parents, her siblings and her own along with my father’s.

Looking at the page, I realized how many of the names became the names of my cousins and me, of our children, and now, even our children’s children. It was a veritable, tree of life, renewed.

And what a small but precious gift my mother had left behind.

Stein writes at the end of her beautifully crafted book of the magnificent legacy of the Levy’s written record. “. . . letters are an inheritance,” she writes. “The longer we save them, the richer they become. And us too.”

The treasure chest that Stein discovered and then shared with readers reminds of the power of stories to bind us together, even when we are apart, to connect us to the past and to conceive a future.

To carry with us, and, even remembering the darkest times, to carry on.