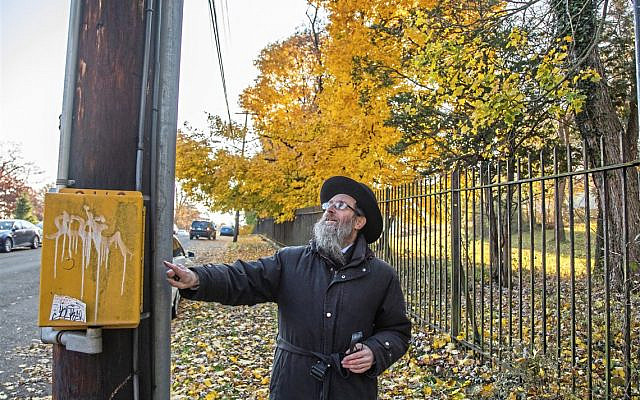 I’m old enough to recall the pre-eruv days, when we were not permitted to carry items to shul or push baby strollers on Shabbat.

As a youngster, I remember my parents reminding me before Shabbat to empty my jacket and coat pockets, and men making sure to bring anything they needed for shul on Shabbat with them on Friday afternoon on their way to shul.  I also remember several folks who fashioned house keys into tie holders to allow them to “wear” the key that they needed when they returned home from shul.

Those pre-eruv days, of course, are long gone.  And for me, they have actually been gone a bit longer than most.

You see, my family lived in West Hempstead, NY, in the early 1970s.  And West Hempstead just happened to be one of the very first communities in America to build an eruv … which is a very interesting story in itself.

In 1970, the Young Israel of West Hempstead hired a young rabbi named Rabbi Shalom Gold, a Ner Israel graduate.  My father, of blessed memory, chaired the rabbinical search committee that had recommended Rabbi Gold be hired.  He was certainly an out-of-the-box choice, as he was not a Yeshiva University graduate and was coming from the yeshiva world in Toronto to become a pulpit rabbi and lead a Modern Orthodox congregation.  Rabbi Gold accepted the congregation’s offer to become its next spiritual leader.

However, he had a problem. He had moved to Toronto as a young, single rabbi, but now he had a wife and baby. At the time, Toronto already had an eruv. Rabbi Gold’s wife, who grew up in Toronto, told her husband that she couldn’t live in a community without an eruv, as she was not going to be stuck in the house because she couldn’t push a stroller.

So once he arrived, Rabbi Gold drove around town for hours checking the telephone poles – and determined that the topography would indeed allow for the construction of a kosher eruv.  He came home to his wife, and excitedly told her, “I can do this!”

He then went to Rav Moshe Feinstein, arguably the leading halachic authority of the time, to obtain “permission,” and Rav Moshe asked him how many rabbis were in West Hempstead.  Rabbi Gold answered, “Just me.” Rav Moshe then told him in Yiddish, “Macht! Macht! (Make it!  Make it!).”

And that’s exactly what Rabbi Gold did – with the help of several young members in the community.  On March 28, 1971, shortly before Pesach, the eruv became operational in West Hempstead, making it one of the very first communities to have an eruv in America.  (St. Louis was the very first American city to have an eruv, more than 50 years prior, and Staten Island preceded West Hempstead by a couple of years.)

Much of the materials used to build the West Hempstead eruv were crude.  Today we have pre-fabricated lechis (the polyurethane molds that are attached to telephone poles to create “doorposts” and make the eruv kosher).  Back in 1971, the lechis that were used were cut from wooden sukkah schach that was donated by Bernard Zivotofsky.

And back then, we didn’t have the sophisticated electronic media (email, Twitter, websites, etc.) to communicate each Friday whether or not the eruv was operational after being checked.  Instead, we hoisted a green flag in front of the HANC school building across from the shul each Friday afternoon to let people know that the eruv was kosher.  Not quite smoke signals … but it seems that way now.  And it worked.

It took a few years, but many other communities observed what West Hempstead had accomplished, and started exploring what it would take to build an eruv in their own towns.  It would not be long before Modern Orthodox couples would move only to neighborhoods that had an eruv. By the mid- to late-1980s, virtually all Orthodox Jewish communities had built an eruv, or were in the process of constructing one. (There were a few holdouts, such as Brookline, MA, which waited until after the Rav, zt”l, passed away in 1993, since the Rav had objected to an eruv in the Boston area.)

Although most Orthodox communities were able to construct an eruv without any objections from local residents, there were a couple of legal battles, most notably in Tenafly, NJ, and Westhampton, NY, in which the shul communities eventually prevailed.

The impact of the eruv revolution in America is immeasurable.  In fact, it might be the defining sociological change of 20th-century Orthodox Jewish communities. It impacted real estate prices.  It often was the difference between a neighborhood becoming a haven for Orthodox Jews or being ignored by young Orthodox families.  It allowed for more women to attend shul and Shabbat programming.  And it made inviting young families with infants and toddlers for Shabbat meals a possibility.

There is one downside to the eruv.  We now have a couple of generations of Orthodox Jews who don’t appreciate the fact that there is a prohibition of carrying on Shabbat, as they have never experienced anything but communities with an eruv.  In fact, there are a few towns that intentionally make the eruv unkosher for one Shabbat a year, in order to remind people that you cannot carry without an eruv.  When I was the chairperson of our eruv committee in Stamford, we actually considered doing this, but decided against it – I personally would have felt terrible if we had caused someone who was not aware of what we had done to unintentionally carry on Shabbat.

Meanwhile, Orthodox Jewish communities have now reaped the benefits of the modern-day eruv for almost 50 years.  And in another couple of generations, there will be few, if any, of us remaining who will even remember that once upon a time, we were actually not able to carry on Shabbat.