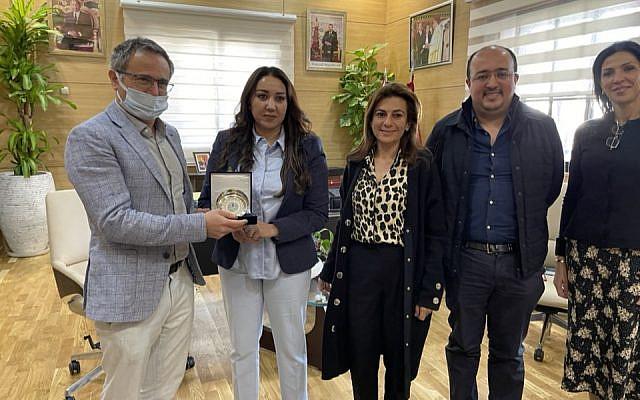 My travels this week took me to Morocco where we began building bridges with political, diplomatic, and community leaders. In all my meetings, I was received with honor and warmth by my hosts and those who helped organize my meetings.

Reinforcing The Abraham Accords is paramount in ensuring that peace between Israel and Morocco is nurtured and becomes absolutely sustainable no matter the political and or security implications.

Morocco differs from most Arab nations in that it has actually codified its Jewish heritage and community into its constitution.  Mimouna President Elmehdi Boudra is proud of this fact and says Moroccans are keenly aware that nearly 350,000 Jewish people once lived here and they were an integral community to its development. In fact, the country is still home to some 3,000 Jewish people and has a system of Jewish schools, Synagogues and community centers.

Casablanca’s first female mayor, Nabila Rmili honored me in her office with a beautifully inscribed silver plate, a welcome to her diverse city. When asked about the Jewish community and history in the city, the mayor said, the “Jewish community is our pride”.

The President of Rabat and its region perceived this realization as a natural fit that folds into strengthening of partnership with Israel and the global Jewish community.

If you think that defending Israel, fighting antisemitism and Holocaust distortion should stay at home, this assumption has quickly changed. The fight is global and even while we must sometimes think locally, we need to act globally.

What we know from our time in Morocco is that Moroccans are ready to embrace this friendship. We are building a global consensus in support of freedom and democracy. This week, the Mayor of Casablanca, a Moroccan Parliamentarian, and Canada’s Ambassador to Morocco all agreed that our drive to build a bigger tent can further the cause of universal human rights, and, most importantly, strengthen religious freedom.

We cannot stand in defense of Israel and sustain the ideological onslaught from campuses and radical leftist organizations, without strengthening the incredible peace agreements achieved through the Abraham Accords. By their very existence, the Accords invalidate the false accusations that Israel practices “apartheid” and are a rational and realistic counter-voice to the failing BDS movement.

This is why Morocco’s peace with Israel not only empowers and sustains peace with Egypt, Jordan, Bahrain, the UAE, and Sudan, it will motivate other Arab nations to join the Accords, and disrupt extremist Antisemitic ideologies.

Here is the truth this week: five more Israelis were murdered in yet another terrorist attack. Iran will probably get the bomb very soon if Biden signs onto an anticipated weak agreement. Antisemitism is rising on every continent. Even New Zealand released a new survey showing that only 42% of its population knows about the Holocaust.

We need allies. We need friends. We cannot stand alone and lock ourselves up into our own community. We cannot bury our heads in the sand and say we first have our own problems to deal with. No. The world is interconnected and this is a global problem to solve.

The other side of this perspective is that Morocco needs Israel and its Jewish community just as much.  Its a country that wants to break out into the global sphere. It needs to bolster is economy through trade. Israel is the pathway to new technology, a growing economy and access to North America markets.

The Abraham Accords may have provided an opportunity for both countries to re-engage with one another, but most Moroccan leaders believe they were simply a re-activation of diplomatic relations already in place.  Serge Berdugo, president of the Jewish community and an Ambassador and advisor to His Majesty King Mohammed VI, said that Morocco and Israel have a long standing and proud relationship.

This is an exciting time for Morocco and for Israel.  We will continue to forge new paths and expand these efforts here in Morocco and around the world.