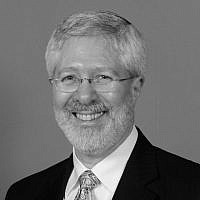 Parashat Yitro describes a precedent which can guide us in understanding the impact of the recent events in Colleyville. As the parasha opens, Moses’s father in law pays a visit to Moses in the desert. He sees Moses is judging the people of Israel all by himself. There is a long line of people stretching across the desert waiting for him to hear their cases.

Yitro says: “Moses, you can’t do this job all by yourself. You’re going to burn out. And it’s not good for the Jewish people either. Get some help.” So Moses does get help. At Yitro’s suggestion, he creates a system of judges, where most of the judging is done by other people, and Moses is at the top of the pyramid, a kind of Supreme Court.

The question is: why did Moses need Yitro to tell him this? Why did Moses think he had to do this job all alone? It’s not hard to imagine why Moses would think he had to be Superman. For 200 years, every day of the week, the Egyptians were telling the Jewish people: “you are weak, you are nothing, you are nobody.” And we believed it.

That feeling doesn’t just disappear on the day you are freed. Moses was determined to prove the Egyptians wrong, how strong he was. So he associated the slightest show of weakness, of need with a feeling of complete helplessness and vulnerability. He hated that feeling.

Yitro told Moses: “It’s not Superman or slave. You don’t have to be invincible to be strong. Nobody can do it alone. Show that to the Jewish people.” So, Moses showed the Jewish people that even the strong need help from others.

Like Moses, we the Jewish people have been caught between two extreme narratives: total helplessness and invincibility. Having been vulnerable and politically weak for 2000 years, it’s natural to fear any sign of weakness.  It’s natural to think that any sign of vulnerability means we’re back in Egypt, a state of deep helplessness. So, we think we have to be invincible to avoid that. It’s either Israeli invincibility or we’re back in the camps and the Warsaw ghetto.

The world has bought into this mythology, too. Either we the Jewish people are Superman, invincible and invulnerable, or we are Holocaust victims. So, the world is in denial about antisemitism. Dara Horn has written that anything short of the Holocaust doesn’t get taken seriously as a hate crime. It doesn’t fit the narrative of the New Jewish Superman. So, it must not be real.

Even many of us are in denial, because we fear that the slightest evidence of Jewish vulnerability takes us back to the Warsaw ghetto. And that’s too painful to consider. So, we convince ourselves we are invincible, and our pain is not worthy of attention.

But the Holocaust is an absurd barrier for us to reach in order for antisemitism to be taken seriously. How many Jews have to gunned down, or be taken hostage, or be beaten up in restaurants in LA for the world to say that antisemitism is a serious problem?

We need to change the narrative. Like Moses, we can be strong without being invincible. Like Moses, we can be strong and still need help from our allies, still deserve help, and not be embarrassed to ask for help just because we are strong. It’s precisely when the ex-weak begin to rise and get strong that antisemitism and racism rear their ugly head. More often than not, racism is directed against the strong and the proud. We need to remind the world of that. No one should have to be a total victim to qualify for sympathy.

The greatest Jewish leader of all asked for help, and he got it. It didn’t diminish his stature. It didn’t take away resources from people who needed it more. We need to take a page out of Moses’s book.