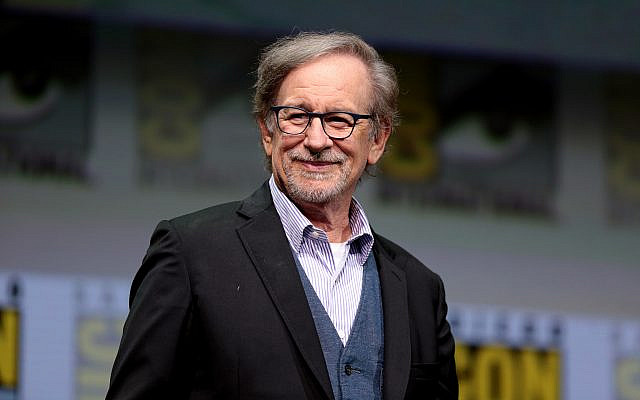 Steven Spielberg is one of the most critically acclaimed and celebrated film directors in the history of cinema, famous for film classics “Jaws,” “Jurassic Park,” “E.T. the Extra-Terrestrial,” and many more. He directed and produced more than 100 films and not only achieved massive commercial success but also brought to the screen more serious issues with films such as “Schindler’s List,” a profoundly moving film about the Holocaust.

Born in Cincinnati, Ohio, Steven Spielberg grew up in the US as part of a Ukrainian-Jewish family. In fact, all of his four grandparents are Jews from Ukraine, born in Odessa and Galicia. During his childhood, he has been suffering anti-Semitism, which resulted in a personal struggle for him of accepting his Jewish identity. Deep inside, he always felt proud of his Jewishness. Producing the film “Schindler’s List”, has been part of his journey of rediscovering his Jewish roots. Today, he embraces his Jewish identity and actively fights anti-Semitism.

“Schindler’s List” had a profound impact internationally and set a milestone in Holocaust education. The film takes the perspective of Mr Schindler, a member of the Nazi party, who saved the lives of over a thousand Jews. The film’s perspective is unique as it looks at the Holocaust narrative from the perspective of a hero, a Righteous Among the Nations.

Spielberg also played an important role in shedding light on the Holocaust in Ukraine by co-producing the documentary film “Spell Your Name” with Victor Pinchuk. The film tells the story of survivors of the WWII Babi Yar massacre and was produced using the testimonies of the Survivors of the Shoah Visual History Foundation, established by Spielberg. The foundation contains 55,000 video testimonies in 43 languages from 65 countries, making it the largest archive of its kind in the world.

In 2006, Spielberg visited Ukraine for the first time in his life to attend the film premiere of “Spell Your Name”. As the first international documentary film on the Holocaust in Ukraine, it had a remarkable impact on Ukrainian-Jewish relations and transformed the way the Holocaust was understood in Ukraine. The film, shown on prime-time Ukrainian TV and in cinemas, reached a wide audience and received outstanding reviews.

With this film, Steven Spielberg had done something extraordinary in Ukraine. Not only had he educated Ukrainians about the Holocaust, but he also set the ground for wider Holocaust teaching in Ukraine. “Spell Your Name” helped Ukrainians rediscover an important part of their history – that was hidden by the Soviet regime – and promoted a more tolerant society for Ukraine’s future.

Directly inspired by Spielberg’s take on the Righteous Among the Nations, I launched a Holocaust educational program called “The Righteous people of my city” in 2018 when I became President of the Jewish Confederation of Ukraine, the umbrella organization of Jewish institutions in Ukraine. According to the National Yad Vashem Museum, there are more than 2,600 Righteous Among the Nations in Ukraine, but experts believe that there are likely many more who remain undocumented. The project honors the heroes of Ukraine who risked their lives to save Jews during WWII by renaming streets after them and using their example to educate about the Holocaust in schools. Spielberg’s “Schindler’s List” taught us that positive heroes can be extraordinarily powerful to promote tolerance and fight anti-Semitism.

The personal story of Spielberg and his artistic productions are wonderful examples of how anti-Semitism can be overcome by personal strength and truth to one’s identity. With the power of art, Steven Spielberg transformed education and understanding of the Holocaust and played a significant role in the fight against anti-Semitism in Ukraine and throughout the world. Spielberg tells us the beautiful story of good prevailing over the bad, light overcoming the shadow and by this, he commemorates the forgotten heroes of the Holocaust, the Righteous Among the Nations.