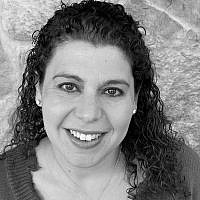 The Blogs
Stacy Bratt Seltzer
Apply for a Blog
Advertisement
Please note that the posts on The Blogs are contributed by third parties. The opinions, facts and any media content in them are presented solely by the authors, and neither The Times of Israel nor its partners assume any responsibility for them. Please contact us in case of abuse. In case of abuse,
Report this post. As children we can’t wait to grow up, to have a voice and to be in charge.  I witness it with my own three children today, who often tell us how “lucky” we are to be grown ups. Peeling back a layer, this gets at their desire to be part of the action and contribute in meaningful ways to their lives and their family.

With Passover approaching, my mind is drawn to my Poppop Sid, who empowered me with the opportunity to be a “grown up” and retain the joyfulness of a child celebrating the holiday of our freedom.

When I was a little girl, he spent hours with me and my sister preparing for our family seders. These are some of my favorite memories. He always found ways to include us and make us feel important during this special family time. My sister took ownership of kicking off the seder with ‘Kadesh-Urchatz’ which lays out the roadmap for all that is to come. I would lead Avadim Hayinu and proudly follow along, reading wherever needed, all while his steady hand guided us towards dinner creating a meaningful connection to our collective history and the future we hoped to create.

It was such an honor to sit by his side as we, together, led our family in song and prayer. As kids, he made us feel valued and important. Even as an adult, I feel very fortunate to have a husband who understands this deep bond and it has been incredibly meaningful to be able to share these seders with the next generation.

My Poppop Sid and his wife, my Mommom Esther, are Holocaust survivors.

My grandfather was born in Guttstadt, Germany in 1928. He was the oldest of four children. He remembers watching in horror as they burned his synagogue during Kristallnacht, the night of shattered glass. His father and all of the adult men in his family were arrested that night. In the weeks that followed, my great-grandmother learned about an organization that was taking Jewish children to England called Kindertransport. She applied, on behalf of my grandfather and his 3 younger siblings, and was told she could only send one child. She chose my grandfather because he was the oldest. He was only ten years old. My grandfather remembers packing a small suitcase. As he boarded the train his mother told him, “You lead the way, we’ll follow you. We’ll see you in England.” In 1945, at the age of seventeen, my grandfather was reunited with his father in London. They never learned what happened to his mother or siblings.

My Mommom Esther was born in Vilna, Poland in 1929. She and her parents survived the horrors of the Vilna Ghetto and HaKapeh Labor Camp. They later escaped to a small cellar, where they lived for two weeks before being liberated. Her reality and experiences go beyond the human imagination.

My grandparents have survived the unthinkable, but their love for family, holidays and traditions has remained steadfast.

Their stories have been a part of my life for as long as I can remember. Being a 3G, that is the term used to describe the third generation, the grandchildren of Holocaust survivors, has been something that has meaningfully shaped my life in ways that are hard to describe.

In recent years, many 3Gs, like me, have come together to create organizations across the world to honor our grandparents through education, advocacy and peer support. In 2009, my husband and I created Boston 3G and just this past year, I worked to create 3G Philly, a group for grandchildren in Philadelphia and across the Delaware Valley. These inspiring, burgeoning 3G organizations work together to uphold the pledge of “never again.”

A few weeks ago, my kids excitedly asked if they could help lead our seder this year by putting on a show. They will be acting out the Passover story, each playing multiple parts.  There will be hours spent discussing costumes and rehearsing lines. The chronology of the story may not be quite right, but their excitement takes me back to my hours spent with my Poppop Sid. My heart is full and I am incredibly thankful for my amazing grandfather.  I am also excited for the new traditions we are creating, together. I look forward to watching my children pass those traditions on to their children, honoring their heritage and our enduring freedom. L’dor Vador – from generation to generation.

About the Author
Stacy Seltzer grew up in Allentown, Pennsylvania. She attended the Allentown Jewish Day School and spent her summers at Camp Ramah in the Poconos. Stacy graduated from Muhlenberg College and received a JD from Suffolk University. Growing up in a survivor family, she has always been conscious of the role the Holocaust played and takes great pride in continuing the legacy that her grandparents have created. After traveling to Poland and Israel on March of the living, Stacy and her husband founded Boston 3G, a group for the grandchildren of Holocaust survivors in the Boston area. In 2021, Stacy founded 3G Philly. She also sits on the board of 3GNY. Stacy currently lives outside of Philadelphia with her husband, Matt, their three children and their dog.
Related Topics
Related Posts
Comments