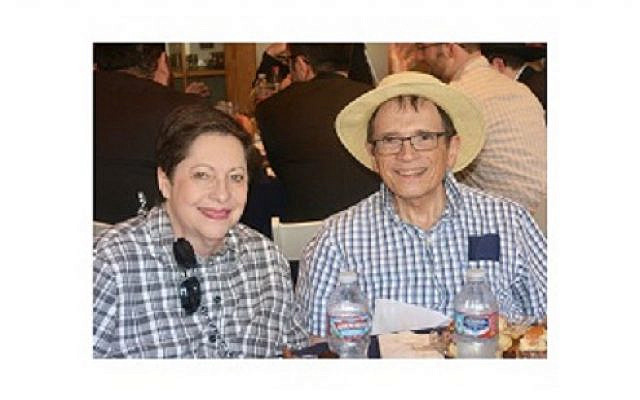 My wife and I at a welcome seudah for the incoming Rabbi of Ohr HaTorah Congregation in Phoenix.

First, let me thank the Blog Editor for approving my application. Scanning the latest blog posts, with the authors’ biographies (several of whom I recognize by name), I appreciate being here in such august company, and I hope to justify my acceptance with commentary focusing on aspects of Judaism from the point of view of an adult ba’al teshuvah physicist, as well as the current issue of rising anti-Semitism and the insecurity that accompanies it.

This post is intended to establish my identity, with philosophical tangents mixed in as an appetizer for posts to come.

To begin, I’m essentially your prototypical Ashkenazi Jew. My grandparents of blessed memory all came to America from Eastern Europe, settling in New York, my mother’s family in Brooklyn and my father’s in the Bronx. My parents met through what strikes me as Divine intervention in the form of a “mistake” by the Post Office. My father obm was in the Army (this was during World War II) and was corresponding with one Miriam Friedman. One of his letters was delivered to another Miriam Friedman, a friend of my mother’s, who realized my father was too young for her and passed the letter on to my mother obm. The rest is history.

I’m their only child, and I marvel at the fortuitous circumstances that brought me into olam hazeh. While my father’s parents emigrated before World War I, as the result of a story too long to relate here, my maternal Zeydie came about 1924, and became a citizen five years later. At the time, his minor children, including my mother, automatically became American citizens (that provision was repealed in 1936). He saved enough to bring over the family early in 1930, and because the children were citizens, they were allowed to bypass Ellis Island and disembark at the dock in Manhattan. Amusingly, it had been so long that my Bubbie had to explain to my mother that the man waiting to greet them was her father.

In other words, my mother’s family escaped the Holocaust by less than a decade; Zeyde’s relatives who remained in Poland were shot by the invading Germans while trying to escape across the River Narew.  My mother told me that when he saw his daughters all dressed up to go out on Saturday night, Zeydie went over to the bureau drawer, took out his “citizen papers” (his certificate of naturalization), and kissed them in gratitude for being in a free country in a neighborhood that had shuls, kosher grocery stores, etc. within walking distance. Consequently, I am incensed when I see so many young people, and especially young Jews, trashing America in the name of their “woke,” progressive ideology. Rabbeinu Asher wrote in Orchos Chaim of the Rosh #129, “Do not be an ingrate,” which is exactly what these America-bashers are. Instead of being grateful that their grandparents or great-grandparents came to the gentile nation that has been better for Jews longer than any other in history because it was founded on Judeo-Christian principles, a nation that the Lubavitcher Rebbe described as the medina shel chesed (the land of kindness), they seek to “fundamentally transform” it. Into what? The Soviet Union 2.0? Venezuela? Cuba? A satellite of Communist China? What colossal chutzpah!

Returning to our primary discussion, the one remaining element I’d like to cover is becoming a ba’al teshuvah. Starting from coming of age in Phoenix as semi-observant Conservative (Rosh Hashanah, Yom Kippur, a kosher home but eating non-kosher outside, driving to shul and watching TV on Shabbos, etc.) it has been a lifelong process, beginning with purchasing a paperback English translation of Pirke Avos mainly out of curiosity because I knew nothing about the Talmud. Over the years I added laying tefillin, counting the Omer, studying the Chumash on my own, and so on. The big turning point came in 2013, I believe, when Yom Kippur fell on Shabbos. I just couldn’t bring myself to violate both holy days by driving. I contacted a Rabbi I knew in the community who had a guest room in his house. Although the room was already reserved, there was a last-minute cancellation and I was able to stay there and walk to shul. It just goes to show that whichever way one chooses to go, G-d makes the path easier.

Thereafter I stayed with a friend for Shabbos and Yom Tov until I was able to move inside the eruv. That too was remarkable. I had my eye on the most affordable apartment building in the community, but their website never showed a vacancy. One day I happened to look at the site and lo and behold, they were announcing a vacancy opening in a month. I went there and rented it sight unseen, as it was being remodeled. In time I married a ba’alas teshuvah and moved into her two-bedroom apartment closer to shul.

One final point to tie this history with my new blog. While I was single, after moving into the community, I became friendly with a Chabad Rabbi who invited me from time to time to be his house guest over Shabbos. On one occasion during Friday night dinner, he surprised me by asking me to say a few words to the assembled family and guests about the weekly parshah. I managed to “wing” a commentary, but when it happened again on my next visit, I realized I needed to be prepared. And so I started writing and printing out a commentary, a “script” to take along and read at the dinner table. From there I established a project of writing at least two commentaries (not necessarily a chiddush [new idea]) about every parshah, which I have nearly completed. Then, since I had neither the yeshiva training nor the patience to study texts (such as Mishna and Gemara), I embarked upon project-based learning, that is, thinking of a Jewish-themed subject for Internet research and writing an essay about the results. Those essays and the Torah commentaries provide a body of material that I will incorporate into this blog.

I hope, dear reader, that you will join me on this voyage of discovery.