The Blogs
Diane Weber Bederman
Apply for a Blog
Advertisement
Please note that the posts on The Blogs are contributed by third parties. The opinions, facts and any media content in them are presented solely by the authors, and neither The Times of Israel nor its partners assume any responsibility for them. Please contact us in case of abuse. In case of abuse,
Report this post.

The Canadian Friends of Haifa University Mount Carmel Dinner, April 19 in Toronto, honoured Canadian Dr. Arnie Aberman with the degree of Doctor of Philosophy (honoris causa). In the words of our Prime Minister, Stephen Harper:

“Over the years, Haifa University has recognized several remarkable Canadians, who, like Dr. Aberman, Dean Emeritus of the Faculty of Medicine at the University of Toronto, have made significant contributions to society. Tonight’s event upholds this tradition by highlighting Dr. Aberman’s important role in the advancement of medicine in Canada, particularly the establishment of Critical Care Medicine as an independent specialty.”

This evening was made possible by the work of Hetty Shapiro, the National Executive Director of Canadian Friends of Haifa University. No small feat!

Yet, for me the dinner was bittersweet.

The sweet consisted of the wonderful people at the event. Almost 650 people came out to honour Dr. Aberman in the Canadian Room at the Fairmont Royal York Hotel, one of the oldest and finest hotels in Toronto; in Canada for that matter. And the guests were as diverse as the student population at the University of Haifa which is the leading university in Israel in the humanities, social sciences and marine research. It strives to bring together members of different cultures and faiths as we in Canada strive to be a multi-ethnic country.

Raheel Raza was at the dinner. She is Muslim, a public speaker, a Consultant for Interfaith and Intercultural diversity, and a documentary film maker who brought us the Honor Diaries; a film about women working to bring about change in the Muslim world that unfortunately was dealt a blow by a backlash from Muslim organizations.  She is also the author of “Their Jihad…Not My Jihad.”

Mark Vandermaas is the founder of Israel Truth Week. His story is fascinating. Born in Holland and a proud citizen of Canada, he fought for the rights of the residents of Caledonia, Ontario against the attacks by masked Native Canadians who terrorized the residents while the police stood by, refusing to get involved. Christie Blatchford, an esteemed, courageous journalist, and in my opinion, a most righteous woman wrote a book about Caledonia: “Helpless: Caledonia’s Nightmare of Fear and Anarchy, and how the law failed all of us”  in which she talks about Mark, one of the activists trying to keep the story in the media.

Mark, a Christian, realized after this unexpected battle that people must stand up against violence and false narratives. He became acquainted with the attacks against Israel and is working toward removing the phrase “occupied territories” from the lexicon. He is following in the footsteps of Salomon Benzimra and Goldi Steiner co-founders of Canadians for Israel’s Legal Rights(CILR) and authors of “The Jewish People’s Rights to the Land of Israel.”

Mark studied and read documents about the Middle East which led him to fight to bring the truth to the public square, that these lands are not “occupied.” They were ceded to Israel in 1922.

He told me that he keeps in mind the poem “First they came for the Socialists…Then they came for the Jews…” by Protestant Pastor Martin Neimoller (an outspoken public foe of Adolf Hitler, who spent the last seven years of Nazi rule in concentration camps), as a reminder to continue his battles to expose the truth.

Judy Feld Carr attended as well. What an extraordinary Canadian Jewish heroine. Her rescue of the Syrian Jews is miraculous. Sadly, today, the world is not paying attention to the Syria Christians under attack. Would that they had a courageous woman like Ms. Feld Carr.

And then I saw Jessica Cherkasov, a young Jewish woman I met several years ago. She is a member of StandWithUS, Canada and proudly advocates for Israel as do so many young people. She is also President of the York Students for Israel in Toronto

I had the opportunity to meet Miroslave and Toshie Marinov, two non-Jews responsible for the searing social media outlet, Blogwrath. And Yossie Winter-President of Toronto Zionist Council (TZC). And Joe Geminer who with his wife Renanah Goldhar-Gemeiner  worked with the late Howard Grief to create a petition summarizing the facts surrounding Israel’s borders which was presented to the Canadian government. And Doris Epstein, a firebrand for Israel: an advocate, a journalist, a TV personality and member of the Canadian Institute of Jewish Research. There was no shortage of love for Israel in this room.

The dinner proceeds are going to support two very important programmes at the University of Haifa: the Ambassadors OnLine Program and the Elizabeth and Tony Comper Center for the Study of Antisemitism and Racism.

And this is the bitter.

In the 21st century more than 70 years after the Holocaust, we the Jewish people are still under attack, now worse than ever, and so we must continue to fund programmes like these, at our universities in Canada and Israel.

The Ambassadors Online Program began in 2012. It is endorsed by FAST (Fighting Antisemitism Together) a coalition of non-Jewish Canadian business and community leaders encouraging other non-Jews to speak out against this irrational Jew hatred. This coalition is funded by Tony and the late Elizabeth Comper, providing students with the skills needed to be unofficial Israeli ambassadors by making use of the media; social media in particular. These students confront the delegitimizing of Israel from BDS to accusations of apartheid. The Ambassador Online Program initiated the #Bring Back Our Boys Campaign on behalf of Eyal Yifrach, Naftali Fraenkel, Gilad Shaar, kidnapped and then brutally murdered last summer. The group also developed a media war room to provide the Israel narrative during Operation Protective Edge which was much needed as we all learned in Canada from the biased reporting, especially by the Canadian Broadcasting Corporation.

The Elizabeth and Tony Comper Center for the Study of Antisemitism and Racism opened in 2007 to focus on research in new forms of antisemitism and delegitimizing Israel while helping to improve public relations and diplomacy and develop cooperation with international organizations.

The guests at the dinner ranged in age from 10 to 95. Many tables were filled with university students. It’s always wonderful to see young people, like Jessica, attend Jewish events. But they were here learning about programmes offered at the University of Haifa for counteracting the oldest and longest running hatred in the world-Jew hatred.

The evening began with two beautiful national anthems. During O Canada we witnessed an overview of this country-a vast and glorious country. And then we sang Hatikva while viewing another extraordinary country; this one on a sliver of land that the Jewish people turned from swamp and desert to a land of milk and honey. And I was brought to tears. How blessed we are to live in Canada and be part of Am Yisrael. Oh, the sweetness of it all. 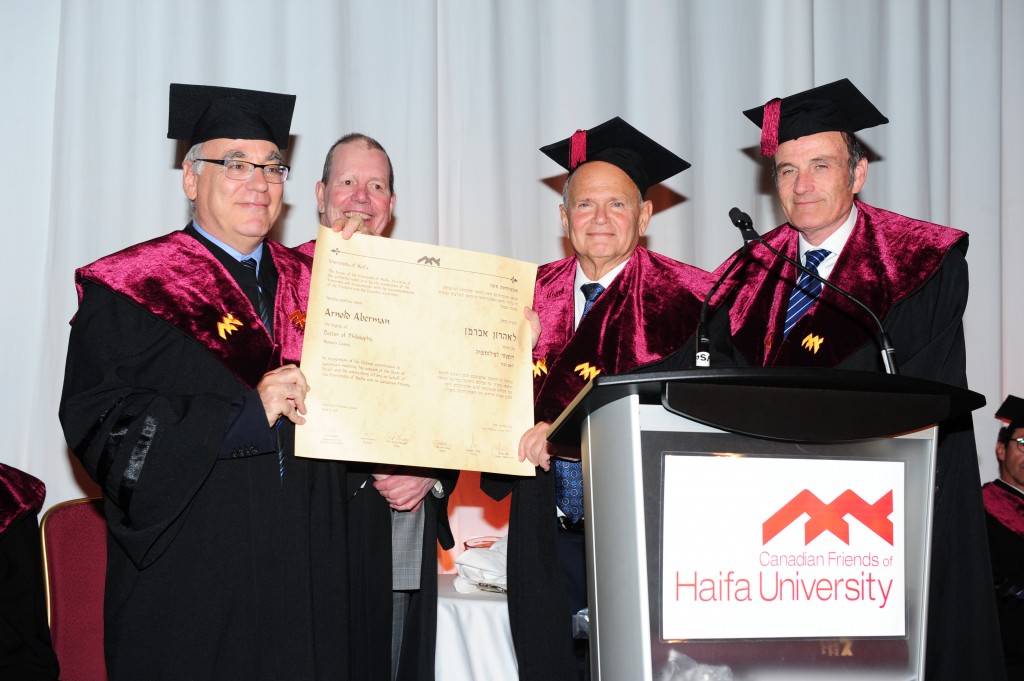 L-R:University of Haifa Rector, Prof. David Faraggi, Tribute Chair, Tony Comper, Honouree, Dr. Arnie Aberman, and University of Haifa President, Amos Shapira.
About the Author
Diane Weber Bederman is a multi-faith, hospital trained chaplain who lives in Ontario, Canada, just outside Toronto; She has a background in science and the humanities and writes about religion in the public square and mental illness on her blog: The Middle Ground:The Agora of the 21st Century. She is a regular contributor to Convivium: Faith in our Community. "
Related Topics
Related Posts
Comments