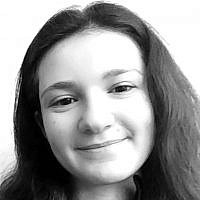 The Blogs
Rena Torczyner
Apply for a Blog
Please note that the posts on The Blogs are contributed by third parties. The opinions, facts and any media content in them are presented solely by the authors, and neither The Times of Israel nor its partners assume any responsibility for them. Please contact us in case of abuse. In case of abuse,
Report this post.

Today, we live in a world that preaches freedom of speech. Forums both on and offline spanning hundreds of widely used platforms present this opportunity, and their users take up the pen eagerly to share their thoughts. To give one example: social media, where the passionate of every generation spill their lives, values, and ideals.

What about people who aren’t passionate about politics, or particularly educated about current events? They must acquire an opinion first, which can be done in either of two ways:

When discussing a topic like the Middle East and specifically Israel, many of the indifferent will default to the second option, simply due to the sheer scale of the subject. The Israeli-Palestinian conflict spans millennia– it brings into the picture not only Israeli and Palestinian history, but incorporates the West as well, dating back to the British Mandate in the Middle East. It isn’t a simple read-through-a-fact-sheet or learn a few stories and you’ve got it down. Consequently, many turn to pre-formed opinions, and who better to look to for this than the idols of society?

Celebrities- even the definition of the word, and what it entails- are controversial. Nevertheless, one thing we must all acknowledge is that, at the end of the day, these people have a stronger social media platform than average, and have amassed a strong fan following among whom their words carry weight. We admire their clothing, their singing, their acting, their personalities (or our narrow perception based on what we see on-screen). Once we become their fans, their opinions means something to us, so when we are obsessed with a song like “Don’t Start Now” and Dua Lipa shares a #FreePalestine post on Twitter, that will have a strong impact on both us and her other 6.6 million followers. The next time we hear someone speaking about the conflict, we have a side to take- perhaps no backup, but a bias that will make it more difficult to convince them into a pro-Israeli perspective.

We can appreciate this support all the more because of who it is coming from. Not only do these people have a larger platform to express their opinions, but they also have a much greater risk involved. In an industry based on entertainment, you need people supporting you, because without people to entertain you are out of a job. It is walking a very thin line to begin to introduce personal ideas, knowing that several others will not agree with you and it can end up being detrimental to your career. Most celebrities are highly aware of this, and thus make sure not to speak up about an issue unless they are willing to receive the backlash and continue despite it. It is not an easy decision, and so the Israelis these celebrities are speaking for feel all the more grateful for the support.

Now, where do we stand? We have many of these societal idols who stand for us and many who stand against… but where does that lead us?

It leads us to our turn. If others are speaking up, it’s high time we do too. That does not mean targeting BDS supporters or Pro-Palestinians- on the contrary, they are not the target audience at all. Everything we do is to convince the undecided, the aforementioned fandom who are neutral in their stance on Israel until their idols make a statement one way or the other. When we respond to an anti-Semitic post, it is not necessarily to convince the author who is already firm in his/her view, rather to make sure that someone who is scrolling through will see that there is more than one side to the story. When we educate ourselves on current events in the Middle East, we are ensuring we will have the ability to shoot down arguments that are based on false premises. When we thank a celebrity for their support, however it is given, we are showing that the backing is mutual- that the hate they get for their decision is not the only feeling they have inspired, because to us, the situation may seem just that much more hopeful for their loyalty.

Celebrities have the power to project their opinions to masses of people, but the groundwork – the obligation to personally interact with others and advocate for our country – falls to us. By learning which people are loyal to us, we can make sure they know the impact they have had, and spread that impact as much as possible throughout our communities- both physical and online. They have spoken out; now it’s time for us to move this forward.

About the Author
My name is Rena Torczyner, I am a high school intern at Hasbara Fellowships Canada.
Related Topics
Related Posts
Comments