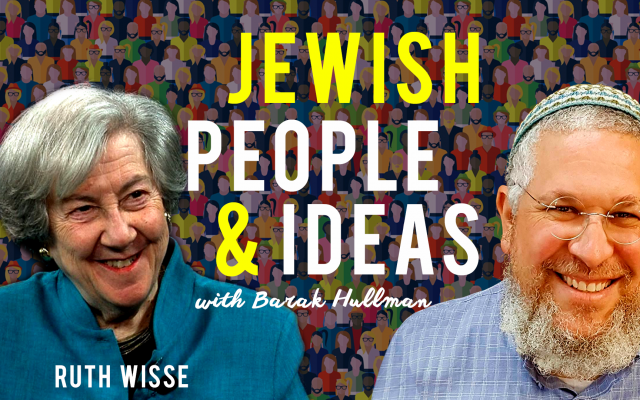 I recently had a conversation with Professor Ruth Wisse, formerly of Harvard University and currently with the Tikvah Fund. For a few years now I’ve been creating two podcasts, the first is The Chassidic Story Project and the second is conversations with  top tier Jewish thinkers and writers for my podcast Jewish People & Ideas.

We covered a wide range of topics from why Jews are anti-Zionist, the Holocaust in Jewish identity and Yiddish writers. Towards the end of the conversation I asked Ruth a question that a friend of mine suggested about the unique role Chabad plays on college campuses.

Since I credit Chabad and the Rebbe’s Shluchim with inspiring me to live a life of Torah and mitzvot, I wanted to share Ruth’s insights on the difference between Chabad and Hillel on Campus.

Here is a transcript of this section of our conversation:

Barak Hullman: I want to ask a question about Chabad on Campus. Chabad started out as a movement spreading Chassidus to other religious Jews but over time became a movement that reached out to Jews not connected to Judaism. Chabad expanded its activities to college campuses and, in a sense, competes with Hillel, which is a very strong, established organization. What role does Chabad play on the college campus?

Ruth Wisse: Well, Chabad became very precious to me on the college campus where I taught for 21 years. I was quite suspicious of it at first, because I did think that it came on to challenge Hillel. That was not it at all, and the difference between them is very profound and I’ve thought about it a lot and I came up with this differentiation:

Hillel is at a tremendous disadvantage, not that it has to be, but the way it has defined itself. It says, anybody who says he’s a Jew, can come in and I have to serve them in some way where they are. So, I have Orthodox Jews, I have to have an Orthodox minyan; I have Conservative Jews and Reform Jews and this kind of Jews and that kind of Jews, I have to serve them, okay.  Then come Jews and they say, I don’t like Israel. You know, I’m a “progressive Jew,” in quotation marks, and Hillel says, we are a big umbrella. Do I have to take these people in? It doesn’t even know where it can stop.

Chabad is so different. Chabad is “every Jew is family.” It opens its doors, kids come on Friday night, they come on holidays, they never ask who you are, what you are. But Chabad is Chabad. The Rabbi and the Rebbetzin and their children and what they create, is totally who they are. They never, never can pretend to be anything else. They say, you can be anything you want. You come into our house to see who we are, be part of this thing.

But it’s so wonderful. You see what a Shabbat is, you see what a family is, you just experience something real. Not somebody who’s trying to say, “Ooh, what can I be for you today?” and who can never tear himself up into enough pieces to satisfy everyone.

It’s just amazing the difference between these two. Just, I would say, the feeling, the atmosphere, that Chabad can radiate, because of its strength.

You can hear the whole conversation with Ruth Wisse at https://soundcloud.com/jewishpeopleideas/ruth-wisse or below:

If you haven’t yet listened to my Chassidic Stories podcast, with thousands of subscribers around the world, you can listen here: https://hasidicstory.com, also available on all podcast platforms including Spotify, iTunes, SoundCloud and YouTube.