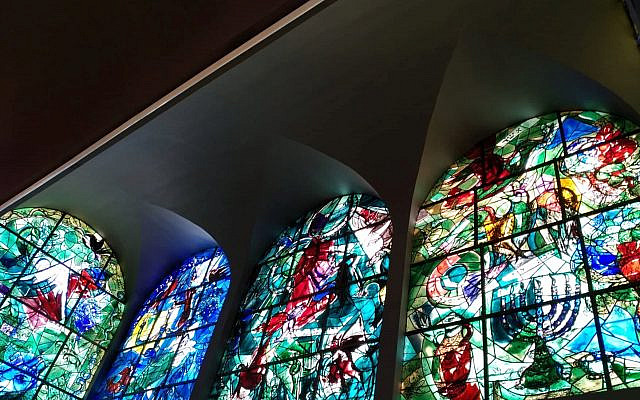 Marc Chagall spent two years preparing the stained glass windows which depict each of Yaakov’s twelve sons. He gave the windows as a gift to Hadassah Hospital in Jerusalem in 1962. At the installation he declared: “This is my gift to the Jewish people, who have always dreamt of Biblical love, friendship and peace among all people.”

Each window is dedicated to a different one of Yaakov’s sons. The windows are based on the blessings that Yaakov bestowed upon his sons right before his death in Parshat Vayechi (Breisheet 49). Every window is a masterpiece depicting each individual’s role in history.

The colors that are used in each window are all intentional and reflect different aspects of Yaakov’s blessings. Reuven is told that he is unstable as water, so the color of his window is blue. Shimon’s window has blue along with red, yellow and green to show Yaakov’s anger at his act of violence. Levi’s window is bright and shows the luchot habrit, tablets of the Ten Commandments. Yehuda’s window represents his kingdom which endured and is therefore a deep red.

Without exception, each window combines so many themes and ideas that you could look at them for hours and still not fully understand everything that Chagall had in mind. Just to give you a taste, one of the images that jumps out from Zevulun’s window is fish and a boat to fit with the blessing (Breisheet 49:13) “Zevulun will settle on seashores, he will harbor for ships; his border will reach to Sidon.” An image that is prominent in Dan’s window is the snake as it says (Breisheet 49:17) “Dan will be a serpent on the road, a viper on the path, that bites the horses heel so that the rider falls backward.”

While he worked on the windows Chagall said, “I felt my mother and father looking over my shoulder; and behind them were millions of Jews, millions of other vanished Jews, of yesterday and a thousand years ago.”

The windows were damaged by the Six Day War in 1967 and repaired by Chagall in 1968.

In 1973-1974, Israeli postage stamps were made illustrating each of the windows.

What a privilege it is to be living at a time when we can visit the stained glass windows in Jerusalem and reflect on the unique character and mission of each of Yaakov’s sons. The windows give us insights into the lives and legacies of Yaakov’s sons and make Parshat Vayechi come alive.