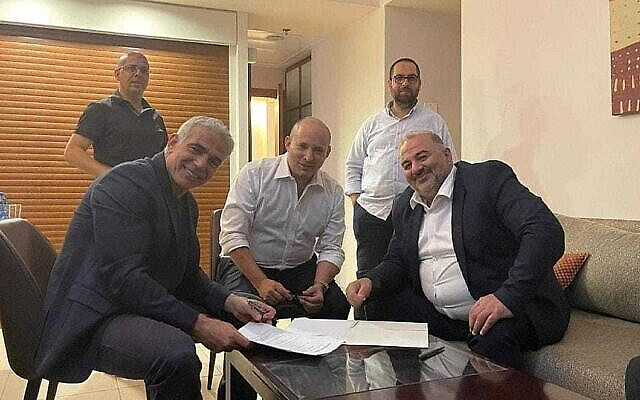 Yair Lapid, the head of the “There is a Future” party and Naftali Bennett, the head of the “New Right” party have done it! They announced last night just before midnight that they have succeeded in cobbling together a coalition for a “change” government in Israel!

They have done it with the help of the leaders of 5 other political parties from the right, left and center of Israeli politics: Meirav Michaeli, head of the Labor Party, Nitzan Horowitz, head of Meretz, Avigdor Lieberman, head of “Israel Our Home”, Gideon Saar, head of “New Hope” and Mansour Abbas, head of the “United Arab List”. This is an amazingly diverse coalition which nevertheless shares in common a few major ideas: that the time to end the disastrous rule of Bibi Netanyahu (and his family) is now, that there is a need for a reasonable, responsible and stable government in Israel, that Israel cannot just keep spinning out of control with more and more elections, and that this is a unique time to focus on many of Israel’s internal issues, such as strengthening the health and education systems, restabilizing  the economy in the post-covid-19 era, working towards more equality in Israel, including and especially for Israel’s Palestinian Arab minority, and more.

Unless Bibi and his cronies pull a rabbit of the hat and get some of the right-wing members of this new coalition to change their minds before the swearing in of the new government in about 12 days, we will be witnessing some big changes in Israeli politics!!

* The first Reform Rabbi in the government, Rabbi Gilad Kariv, the former head of the Reform Jewish Movement in Israel, who was interviewed and spoke well at length on Israeli radio’s public broadcasting news station. He will bring to the Knesset Reform Judaism’s emphases on personal ethics and social justice — values which were very much missing in the Knesset in recent years.

* The first time that an Israeli Arab political party is part of the government. This party is led by a courageous and committed man who is not only determined to gain more rights and more infrastructure for Israel’s embattled Arab minority, but who is also seeking to make great strides forward in reaching out to Israel’s Jewish majority responsibly and respectfully in unprecedented way.

*A government without criminal defendant “Bibi” Netanyahu, who is being tried in court in Israel on three major counts of corruption, and his influential wife, Sara, who has already undergone at least one trial for mistreatment of workers in the Prime Minister’s residence, and their incendiary and inciteful son, Yair, who writes outrageous tweets and Facebook posts which are an embarrassment to the country all the time,  and all of his Likud sycophants who have ramped up incitement and hate speech in Israeli society in recent years (and continue to do so even now, in an unprecedented and dangerous campaign led by their deranged leader to still try to prevent this new government of change from actually coming to fruition during the coming 12 days).

* A government without the fanatics of the extreme right —especially the dangerous and delusional neo-Kahanist Itamar Ben Gvir—whose political party is part of a group of three super extremist political parties who have joined together in one big one which is mislabeled as “Religious Zionism” (who were ironically brought into the Knesset by Bibi!).

* A government without the corrupt anti modern, anti-science, anti-Zionist and non-Zionist irresponsible Ultra-Orthodox politicians, who include leaders who have served time in prison and one who has just been indicted for major crimes of corruption. They have done so much damage to Israeli society in so many ways in recent decades –and during the last year during the covid-19 epidemic — that it will be a great relief to have them out of power.  Hopefully in the next government, the budgets to all their pet projects will be cut drastically, and their influence in policy-making in many areas—including and especially “religion and state” matters, will be reduced to the minimum

Who said that change wasn’t possible in Israel? It is happening before our eyes!

However, as Yogi Berra said famously: “It ain’t over till its over”. This means that until this new government is confirmed by a vote in the Knesset in 12 days, it can still be undone by Bibi and his hordes of hooligans who are not only issuing death threats to politicians on social media but are driving them crazy by demonstrations, attempted bribery and threats all the time. Hopefully their scare tactics will fail and the government of “change” will actually become a reality soon!

This government will not be a government which seeks peace with its potential Palestinian partners beyond Israel’s borders. Unfortunately, there are too many anti-peace right wingers in this coalition. But hopefully it will seek to restore some semblance of “coexistence” or “shared society” between Palestinian Arabs of Israeli citizenship and the Israeli Jewish majority.  This would be a most welcome and much needed change. If we can have some “internal peace” at this time, this would be a great step forward.

On top of all this, the Knesset elected a normal person as President of Israel yesterday. Yitzhak Herzog is a respected, responsible and realistic politician with a warm personality and superior credentials. He is a moderate and a mentsch. And he will be helpful in steering Israeli society in sane and sensible directions of healing and repair.

So, as the old joke goes, “Even though I am Jewish I have some good news for you!” Finally, there is some good news coming out of Israel today. We can now look toward to the future once again with some modicum of optimism and hope.